Downgrading Global Equities to Underweight
Comment of the Day

The most compelling argument for equity valuation is that they are attractive relative to bonds: This is true. There are many different ways to estimate the 'Equity Risk Premium' (ERP), and we'd venture that almost all these various models currently paint a picture of better long-run return potential in stocks than bonds – i.e., equity 'cheapness'.

This matters for long-run asset allocation decisions, where valuations dominate. This matters for how underweight one should be (this would be an easier call if other assets were cheaper). But we don't think that it is sufficient to make equities a buy. Consider the following:

ERP is a pure function of valuation, which tends to work very well on longer time horizons, but more poorly over the next 6-12 months.

Buying 'what's cheap based on ERP' hasn't worked well within the equity market. For example, European stocks have looked cheaper versus bonds than US stocks for the entire post-crisis period. Growth matters.

If bond yields are falling because of growth concerns, ERPs can be misleading. Recall that ERPs failed to provide much of a warning in 2008 or, more recently, before equity bear markets in 2011 and 2015. 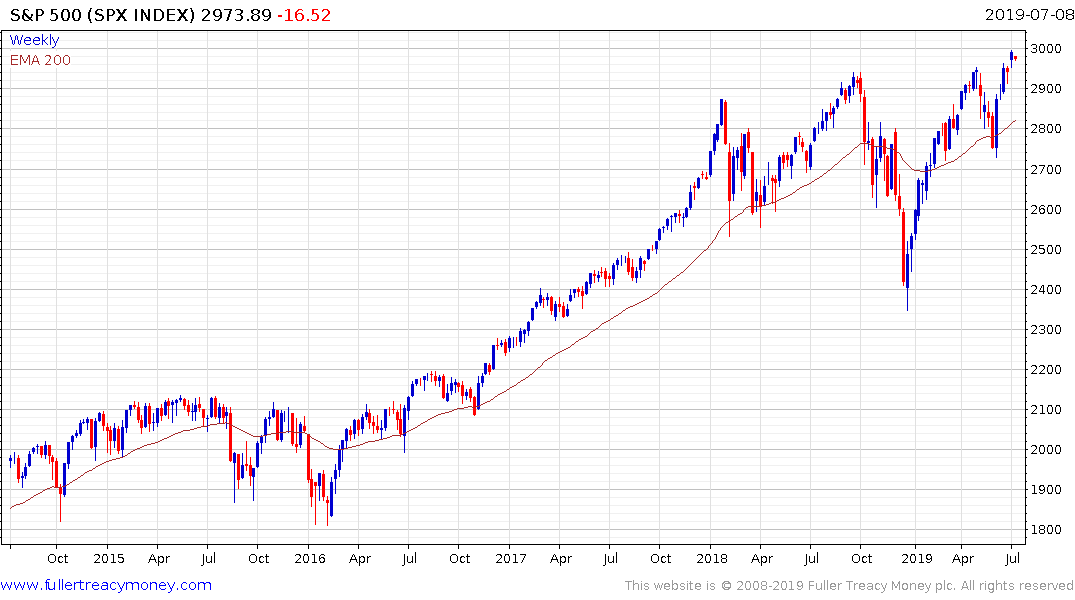 The argument at this stage in the market cycle is less about valuation and more about the fear of missing out. If bond yields are compressing because of the anticipation of massive monetary easing that bond-equity spread will be a significant tailwind for equities on a breakout scenario.

The argument about valuations works much better at the bottom than the top when there is a clear rationale for value following a decline. The problem with using valuations in a bull market is there is always room for further expansion in bubble territory.

The nice thing about the market today is the technicals are easy to assess. We have seen a major recovery off of the lows in December and a consolidation in the region of the peaks. The market broke to new highs last week. If the market has further to go now it will sustain the upward break.

A failure to hold the breakout would be an inconsistency. If the dynamic of a failure is large, that would be additionally bearish. A move below the trend mean would increase scope for a retest of the lower side of the range. Perhaps more important though is if the moving average begins to act as resistance instead of support that would signal a major change of trend.