Don't Fear a Potential Recession; Embrace It
Comment of the Day

Don't Fear a Potential Recession; Embrace It by Eoin Treacy

Could our earnings recession turn into an economic one? Risks are rising, and we don't have a crystal ball, but we also don't really care about such an outcome if it's already priced. A few metrics we like to look at—y/y change in the S&P 500, PMIs, market implied pace of rate hikes (MSP0KE Index), front-end of the yield curve, and the Fed's recession probability models—have all signaled elevated risk of an economic recession. From an equity perspective, we think a retest of the December lows driven by more earnings and economic data disappointments would seal the deal on our earnings recession call. We are equity strategists, not economists, and we've said all along that an earnings recession amounts to the same thing as an economic one for investors.

Momentum: Defensive skew sending same message as the index. The long side of 3, 6, and 12 month momentum is very crowded in Defensives, while the short side skews heavily toward Cyclicals. The situation is especially concerning in short- and medium-term momentum strategies where nearly a fifth of the long side is in Staples, while nearly a third of the short side is in Energy. This is simply another example of the market anticipating the slowdown. Therefore, we want to buy Cyclicals if the market retests the December lows when cries for recession are likely to be loud, and irrelevant.

We are seeing early signs that our margin thesis is playing out. 2019 EBIT margin estimates have contracted by ~50 basis points since the beginning of October 2018. This is the most significant negative revision during this period (beginning Oct.-beginning Jan.) since the Financial Crisis. Both sales growth and earnings growth estimates for 2019 have also come down materially in conjunction with this margin estimate de-rate. We expect margin pressure to be a pervasive theme throughout 2019.

The markets have quickly turned from giving credence to the Fed’s prognostication that they would raise rates as many as two times this year to pricing in none and a cut in 2020. However, it is also worth considering that for the moment, at least, the market is pricing in one cut not a succession of cuts. The extent of the decline seen to date, therefore, has been to price out any net positive from the tax cuts; netting off trade frictions now to the earlier, and possibly temporary, bump to consumer demand. 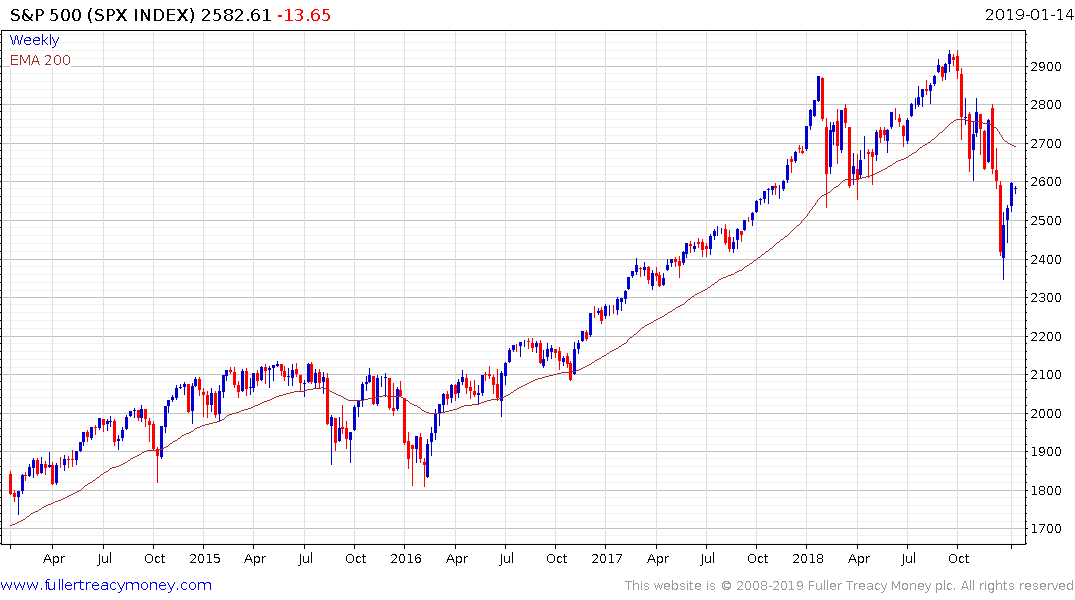 The S&P500 continues to pause near 2600 and by doing nothing is helping to unwind the short-term overbought condition. Nevertheless, the big test of whether we have seen a low of more than short-term significance is in how well the post-Christmas low holds during a pullback and whether the Index can subsequently sustain a move back above the trend mean. 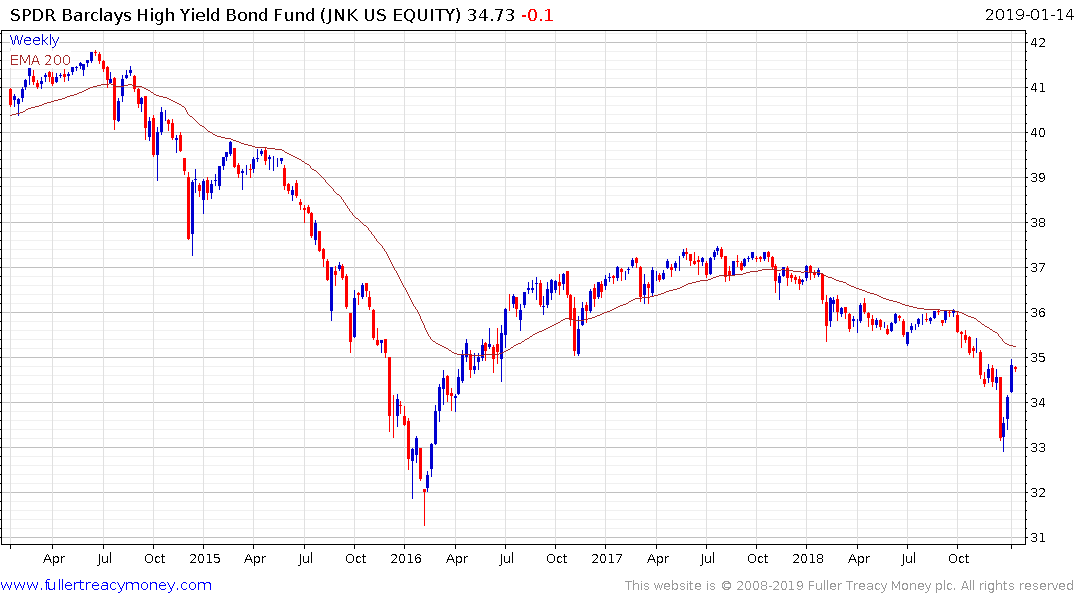 The High Yield ETF was in negative territory today, giving the first tentative signs of resistance in the region of the trend mean.