When combined with the Investment, Realization & Proliferation, and Consolidation & Maturation cycles, these scores extend the innovation impact time series another 15 years.  As shown in Figure 4, this scoring system confirms the view that during the next 15 to 20 years, the five innovation platforms will combine to transform the global economy extraordinarily, in ways little understood today.

Specifically, this methodology suggests that the world has yet to feel the full force of the rogue technology wave that is likely to crest at three times the amplitude of any technology cycle in history. As for time frame, the five platforms are approximately nine years from peak productivity: think 1975 for computers or 1994 for the Internet to get a sense of all of the excitement to come.

We are aware that this analysis has a number of shortcomings. First, economists have had difficulty measuring the impact of General Purpose Technologies on productivity, perhaps because of the cyclical and secular cross-currents inherent in macroeconomic data, but also because of disagreements about which technologies qualify as GPTs. Second, we assign the same investment, realization and consolidation curve to each transformative technology, an obvious weakness because different technologies have different adoption cycles and submit to different diffusion curves. That said, while we model adoption curves for each technology and have found that they are changing at accelerated rates relative to past cycles of innovation, the assumption that adoption cycles are uniform enables a conservative comparison of today’s advances against others in history. Finally, some historians even question the validity of General Purpose Technology theory because of screening criteria that seem too ambiguous to provide information value.10 That said, we must try. Though we agree that the screening criteria present challenges, perhaps the problem is a function of the scarcity of historical examples rather than a weakness in the theory itself.

Secular bull markets are most often driven by massive technological innovation which creates productivity and growth and efficiencies where none where possible previously. That was true of mechanisation, electricity, semiconductors and the internet. It is also likely to be true of biotechnology, blockchain, artificial intelligence, robotics and batteries.

The most important thing about evolving technology trends is it is hard to predict what will succeed first in providing the leap in innovation that will drive an investment cycle. However, we can conclude from the performance of companies relating to these five big sectors that it is a good bet that these will represent the best hunting grounds.

One additional important point is that the technology cycle evolves apart from the business cycle. Secular bull markets survive recessions because the innovation trend creates use cases and efficiencies that are bolstered by the increased competition for resources during a contraction.

Right now, the clearest bullish technology trends are in the cloud computing and fintech sectors where the combination of massive computing power, networks, digitization, distributed ledgers and the subscription business model are combining to create value. 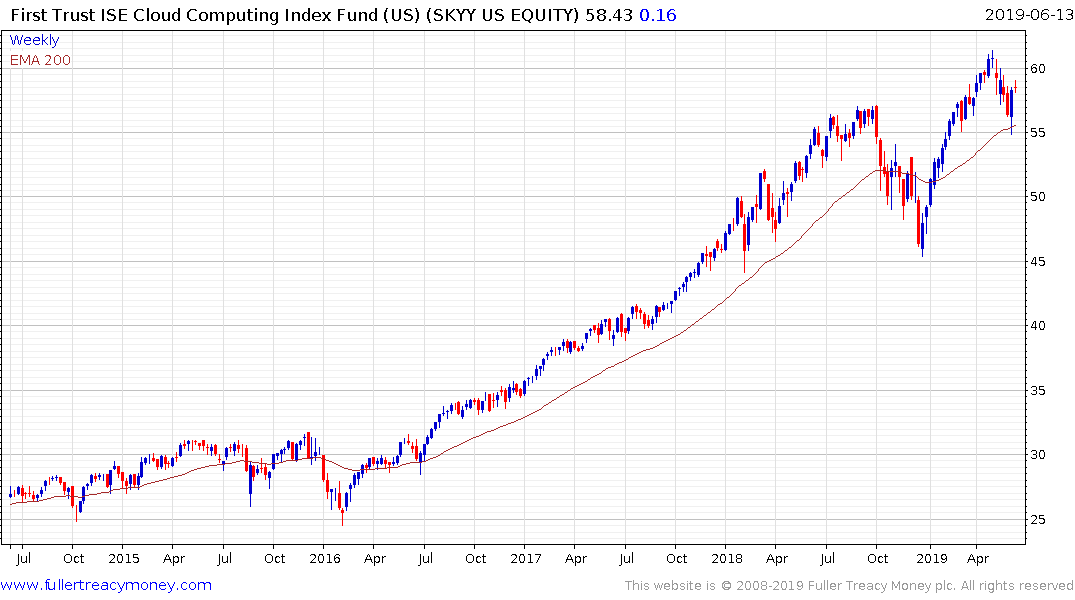 The Cloud Computing ETF bounced nicely from the region of the trend mean last week and remains an outperformer. It will need to hold that low if the medium-term uptrend is to remain consistent.