Did Bitcoin Kill Gold's Monetary Utility?
Comment of the Day

One of the corollaries between cryptocurrencies and gold is that, as forms of money, they’re both grounded in the same decentralized concepts that make them useful alternatives to fiat. Gold has obvious impediments to its monetary utility in a modern economy – mainly the fact that it’s difficult to transport. Bitcoin and crypto fixes that. Personally, I find the long-term inflation hedging benefits of crypto to be somewhat less beneficial than many proponents believe. After all, all crypto is endogenous in the sense that it is literally created from nothing and can be borrowed into existence in exactly the same way that modern banks create synthetic “dollars” from nothing when they make loans. A “fractionally reserved” Bitcoin system with endogenous lending could be every bit as inflationary as the current fiat system with the main difference being that there isn’t a government there to pump trillions into the system on a whim. And that’s where the last 18 months and this “faith put” in gold is pretty interesting….

A strange thing happened during COVID. The US government spent $6T to fight off the pandemic. As expected, the huge fiscal stimulus led to a somewhat uncomfortable level of inflation. But here’s where things get interesting – since the start of the pandemic in March 2020 the price of gold is up 6.5%. The price of Bitcoin, on the other hand, is up almost 10X. It’s not just a small difference. It’s an astounding difference. It’s the kind of difference that makes you wonder if people even believe that gold is an inflation hedge.

The Permanent Portfolio with 25% in stocks, 25% in bonds, 25% in cash and 25% in gold has stood the test of time. It is logical to question whether the introduction of new assets should alter the composition of the portfolio. What I find particularly interesting today is there is a simultaneous questioning of the merits of the 60/40 portfolio which is much more popular than the permanent portfolio.  Meanwhile Paul Tudor Jones is touting bitcoin’s status as an inflation hedge.

The reintroduction of inflation to the public consciousness necessitates we take a view on how persistent this trend is going to be before coming concluding whether the kinds of structures which have served well for years need to be changed.

I believe the upward trend of inflation is not transitory because it is being driven by social factors, just like in the late 1960s. That’s why I agree with most commentators that what we are seeing today is not comparable to the late 1970s. That was the end of the cycle. Today we are at the beginning.

Most people work because they have to. Most jobs involve some form of drudgery and lower paid jobs tend to involve repetitive tasks. When millions of people voluntarily step outside of the workforce, it is reasonable to conclude they have become accustomed to better conditions and/or can afford to forego employment.

Mortgage and student loan forbearance, eviction moratoriums, outsized unemployment benefits and other payments mean people are flush with cash. That’s before the added bump from stock and crypto gains are included. Credit card delinquencies are at record lows which suggests there is no sign of consumer stress just yet; even as these programs wind down. That’s helping to support the inflationary argument and pushing up wages.

Inflation is fundamentally a social phenomenon. Populations first animate for more spending and lax fiscal measures. Social unrest, and the threat of it, deter monetary tightening so prices rise. That feeds through to the belief prices are likely to continue to rise and leaves the economy susceptible to shocks. Eventually, the problem grows so large that people are willing to accept the pain necessary to get the problem back under control. That’s what happened between 1967 and 1980. 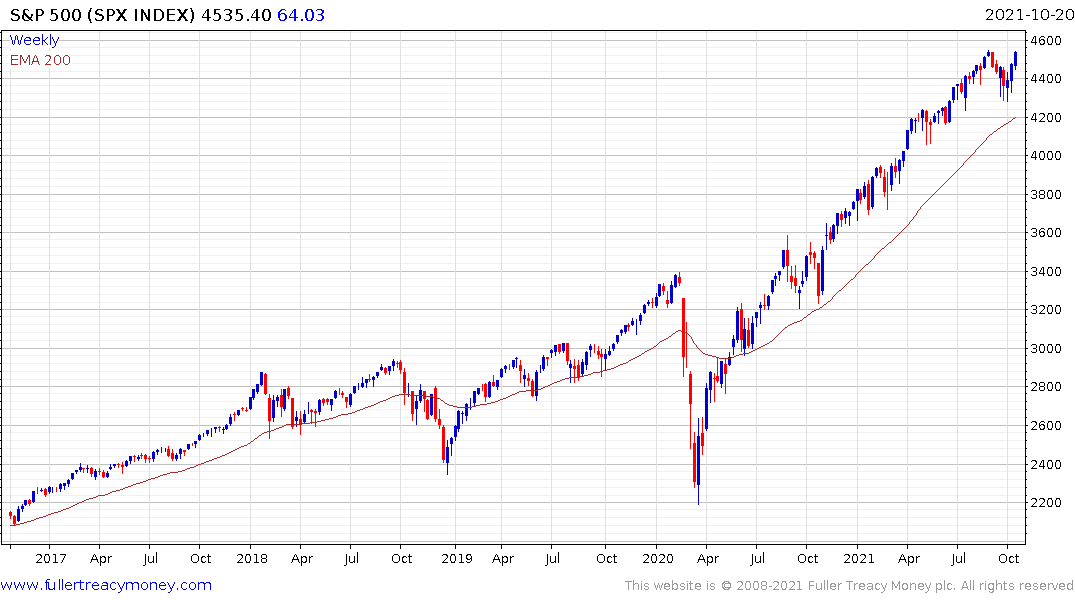 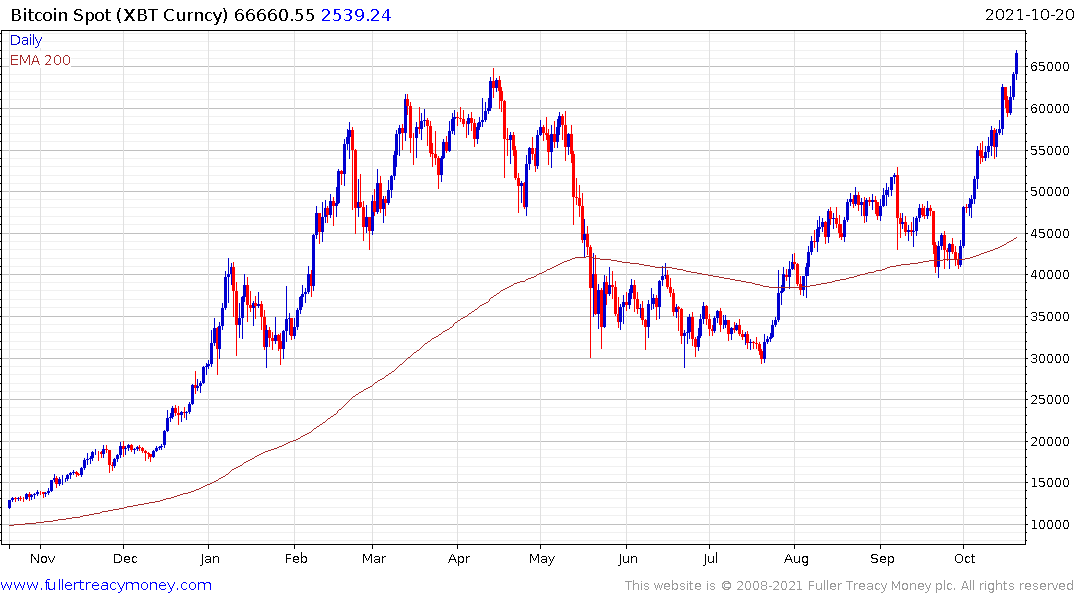 I think it is hard to argue bitcoin is an inflation hedge. Instead, it behaves like a risk asset. It hit a new all-time high today and the S&P500 is within 5 points of doing the same. Therefore, if it is to be included in the Permanent portfolio it should form part of the equity weighting.

It is also worth considering the biggest endowments long ago concluded private equity and other venture investments were a much better hedge against inflation and captured growth at the same time. It strikes me as odd that no one ever suggested they should be included as weighting in the permanent portfolio makeup.

The big question for investors is why has gold been so quiet while inflationary pressures have been mounting? Gold does best in a negative real interest rate environment and the rate is not currently getting more negative. That’s been a factor in the rangy environment. The bigger issue has been the Dollar has been firm. When people lose faith in the purchasing power of currencies, they seek out alternatives. In Venezuela today gold is a physical currency in parts of the country. In others, with better internet connectivity, cryptos are more popular. 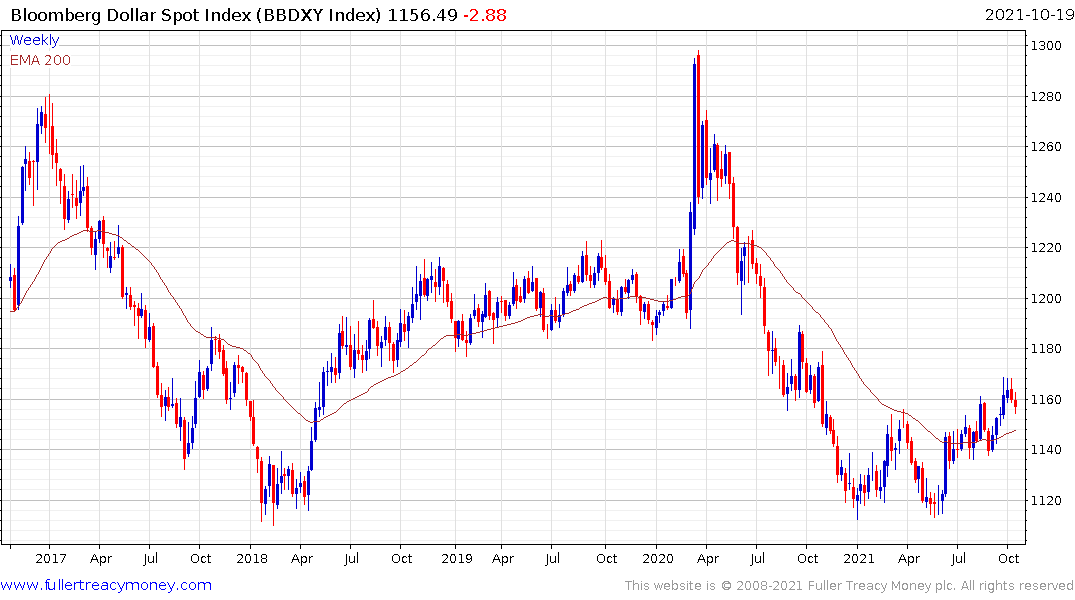 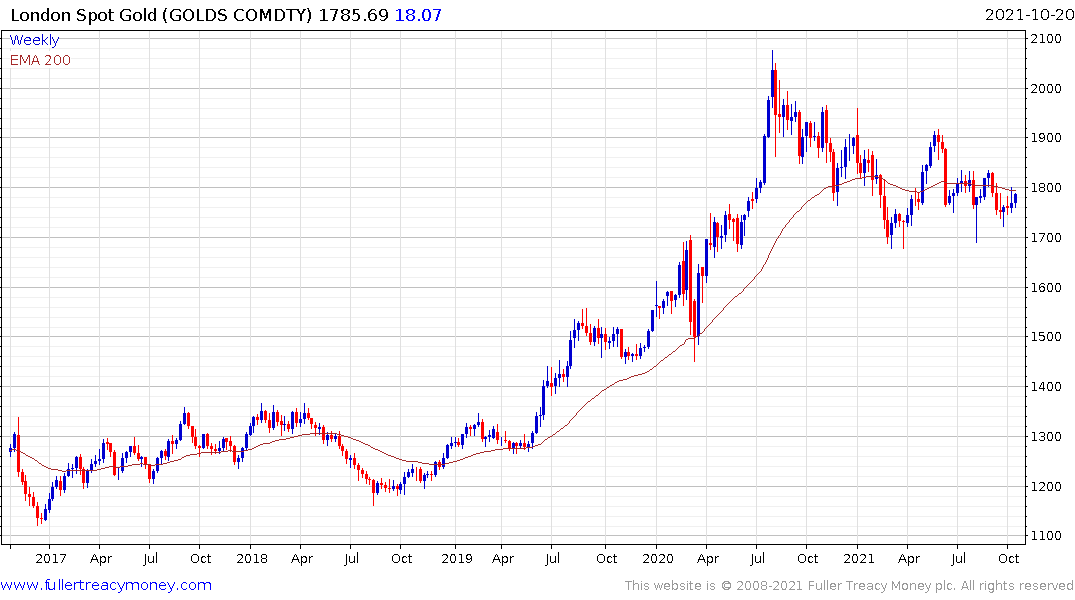 Right now, we have central banks like the Federal Reserve and the Bank of England talking tough on the need to raise rates and normalise policy. Just how far they can go without causing harm remains to be seen. Government finances are much more interest rate sensitive today than before the pandemic. Once the realisation the major economies are in debt traps prevails gold will break out. The chart pattern supports the view it is come to the end of this more than yearlong medium-term correction.