“We are ready for a negotiation,” she said. “I am talking with my caucus and my leadership and we will see what we are going to do,” Pelosi said.

The prospect of talks helped push stocks higher briefly, with the S&P 500 extending gains after the Pelosi and Mnuchin remarks. But that optimism was tempered by reports showing a resurgence in coronavirus cases in Europe and investors pulled stocks back off session highs.

The risk of a slowdown in the recovery is rising with the lack of movement on fiscal stimulus. Initial claims for unemployment insurance remained at a level above the peak during the Great Recession of 2007-09, the latest weekly data showed on Thursday.

Fed Chair Jerome Powell reiterated his conclusion that “it’s likely that additional fiscal support will be needed,” speaking at the same Senate panel where Mnuchin was testifying.

The recovery has been faster than anticipated so far, Powell said, thanks to income support to those affected by the pandemic.

“The risk is that they’ll go through that money, ultimately, and have to cut back on spending and maybe lose their home,” the Fed chief said. “That’s the downside risk of no further action.”

The big question for investors is to determine how credible this news story is. The Fed has been very clear that it sees a need for additional stimulus and that the path out of the recession is dependent on support mechanisms remaining open ended.

Meanwhile the US Presidential Election is in 40 days. The calculus of whether a recovering consumer, aided by additional stimulus benefits one party over the other is going to be a significant factor in how willing they are to agree on a program.

Then there is the fact that both parties are preparing for legal challenges to the outcome. I remain of the opinion that there is a clear potential for mail-in voting to represent a major legal point of contention. The US Postal Service is already falling apart with mass absenteeism and delayed deliveries. The only way votes are going to get to their destination on time will be if the post office shelves all other mail and shows preference for only mail-in votes.

Social unrest is already ramping up. The shooting of police is becoming more common with two today in Kentucky and two earlier this month in Los Angeles. That’s a sharp deterioration in the tone of the demonstrations. It encourages mass arrests, much more brutal police tactics and rigid enforcement of curfews. That’s only going to further incense already restive protest movements.

At the other end of the spectrum, the price of ammunition is in an uptrend. 9mm rounds used to cost around 40c and now go for $1.15. The sale of guns has also surged this year. More than a few people are forming militias with the aim of protecting their communities from rioters. This is a situation which could get very volatile very quickly.

I don’t think the need for additional stimulative measures can be stressed enough. Consumer sentiment has been supported by stimulus and it has saved a lot of jobs. A vaccine is going to be approved over the coming six to eight weeks and restrictions on movement will be lifted. The alternative is chaos. Politicians understand that so additional spending measures and outright MMT are inevitable. The only real question is will we see it before the election. 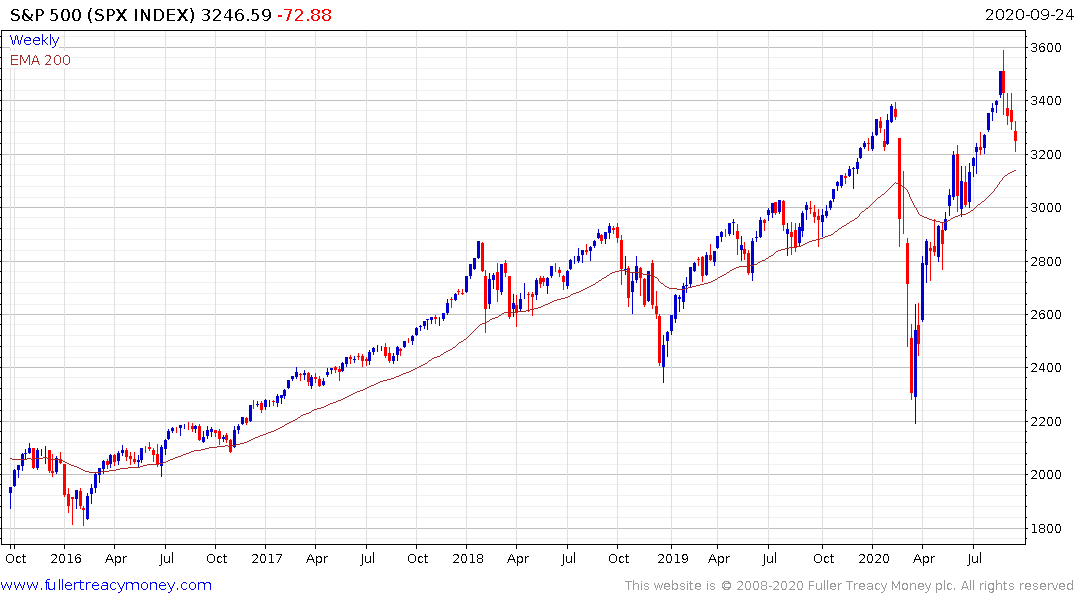 The S&P500 pared a bounce today and remains in a process of mean reversion. 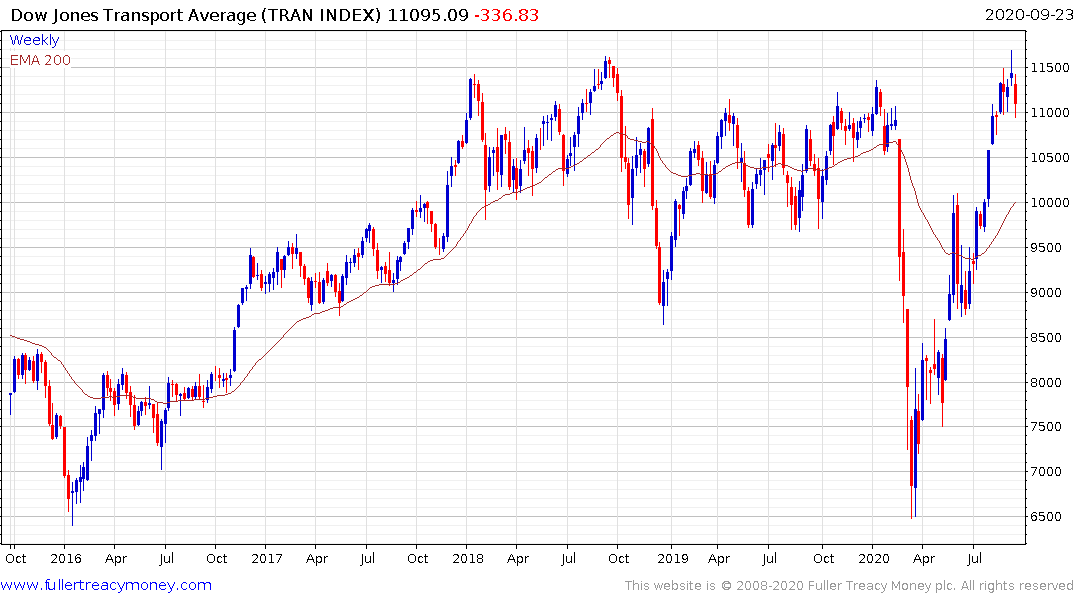 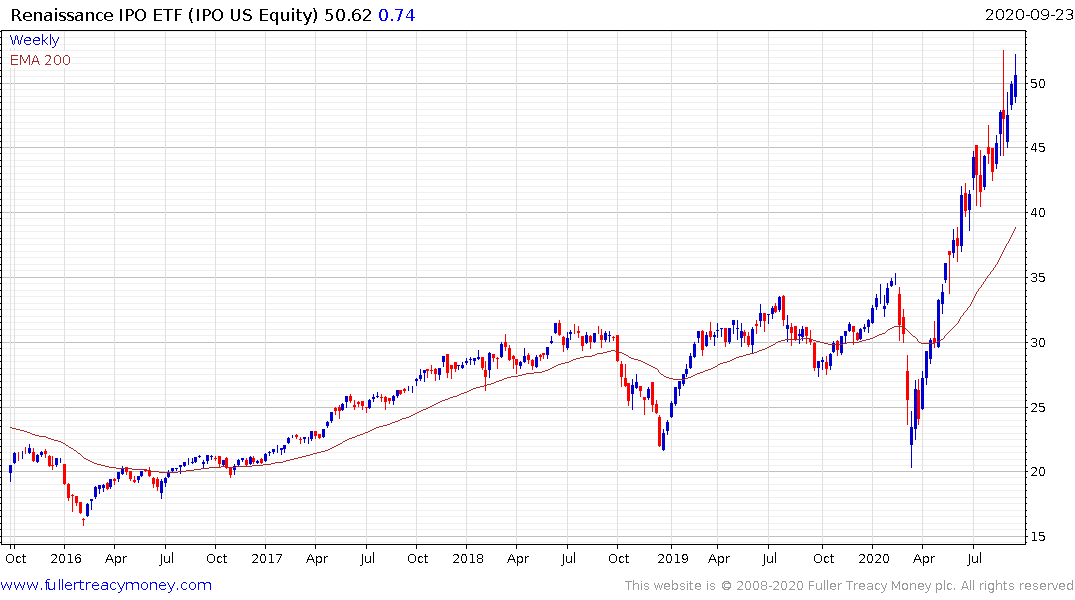 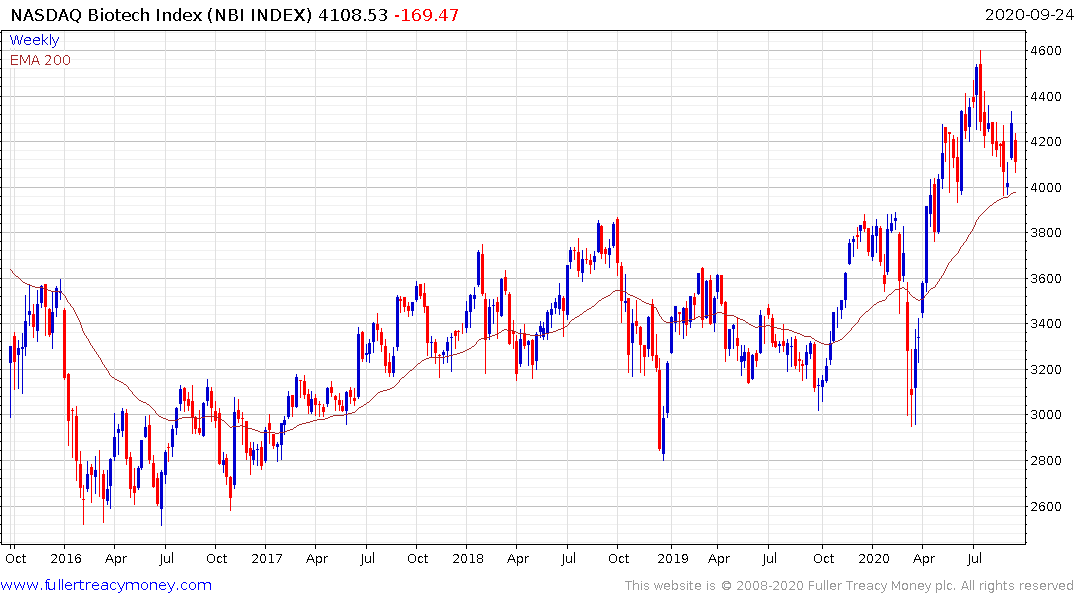 However, it is also important to highlight that amid the palpable fear being expressed by many investors, the Transportation Average has been very firm, the IPO market is till firing and biotech sector continues to hold its breakout from the five-year range. Additional liquidity would certainly help stoke additional interest in these sectors.