“Japan’s real yields are high and are rising with deflation underway,” said Tohru Sasaki, head of Japan markets research at JPMorgan Chase & Co. “The real yield gap widening in the negative is very significant. It may eventually drag the yen higher.”

Consumer price growth in Japan excluding fresh food -- a measure closely watched by the country’s central bank -- has been negative or zero since April. Expectations for future inflation -- derived from 5-year breakeven rates -- sit at minus 0.12%. Equivalent U.S. breakevens are at 2.16%, up over 60 basis
points and rising since November, as investors bet further stimulus under new President Joe Biden will help reflate the American economy.

Yen at 100
The result is a higher real yield in Japan, where 5-year inflation-protected notes trade around zero versus minus 1.73% in the U.S., increasing the relative attractiveness of the country’s bonds and its currency.

You know you live in a funny reality when a zero or negative interest rate produces a positive real yield. Japan’s deflationary environment has been an abiding characteristic of the market for decades and the vast quantity of debt accrued in that time is a headwind to risk taking, speculation and economic activity going forward. Attempts to reinvigorate the domestic demand story with immigration were beginning to bear fruit ahead of the pandemic. Japan has weathered the storm better than most so it will face less of a challenge in recovering as the world heads towards reflation. 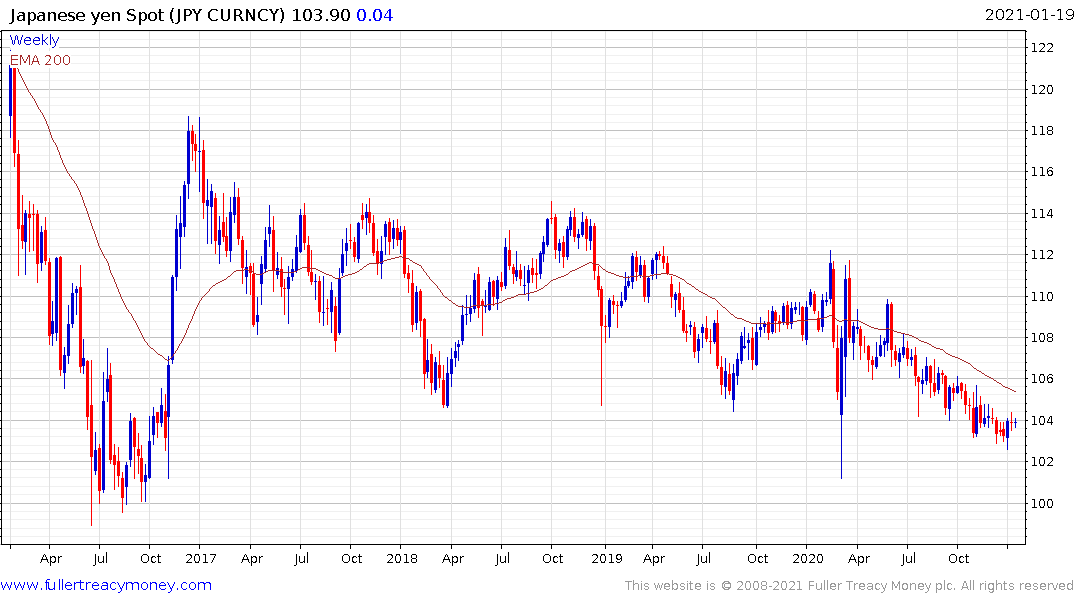 The currency of just about all countries that have come through the pandemic in a more robust manner are appreciating. That’s particularly true for the Chinese Renminbi, Japanese Yen, Taiwanese Dollar and South Korean Won. The Bloomberg Dollar Index is less influenced by the Euro and contains more Asian currencies than the traditional Dollar Index. It remains in a consistent downtrend.

At present no country wants a strong currency and JGB yields are moving back towards the Bank of Japan’s red line of 10 basis points. That suggests there will be efforts to suppress the appreciation of the Yen in the not-too-distant future. 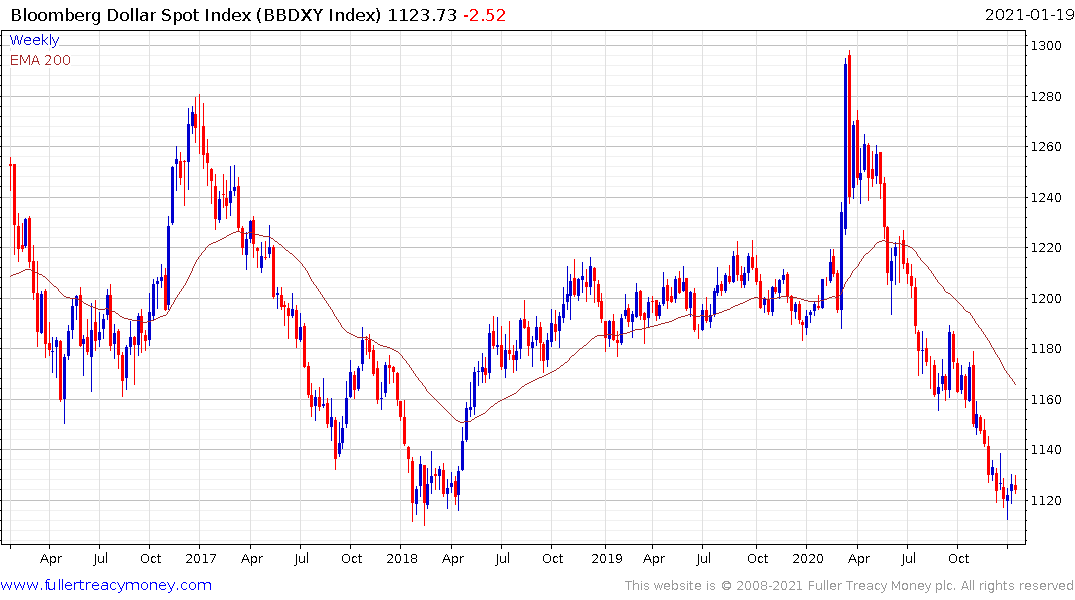 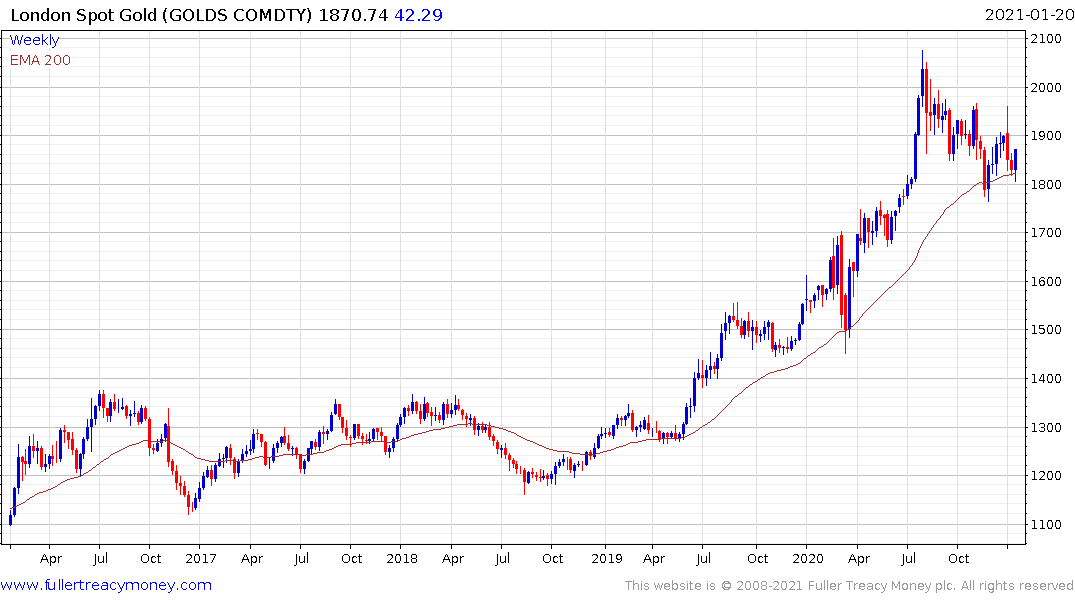 The incoming Biden administration is about to offer citizenship to 11 million illegal immigrants. Many of those people already pay social security taxes, but they will now have greater access to credit too. It represents a massive bump to aggregate demand for funding over the coming decade.

Gold continues to firm from the region of the $1800 and if that level holds it will represent a higher reaction low and the beginning of a bottoming process following a five-month corrective phase. 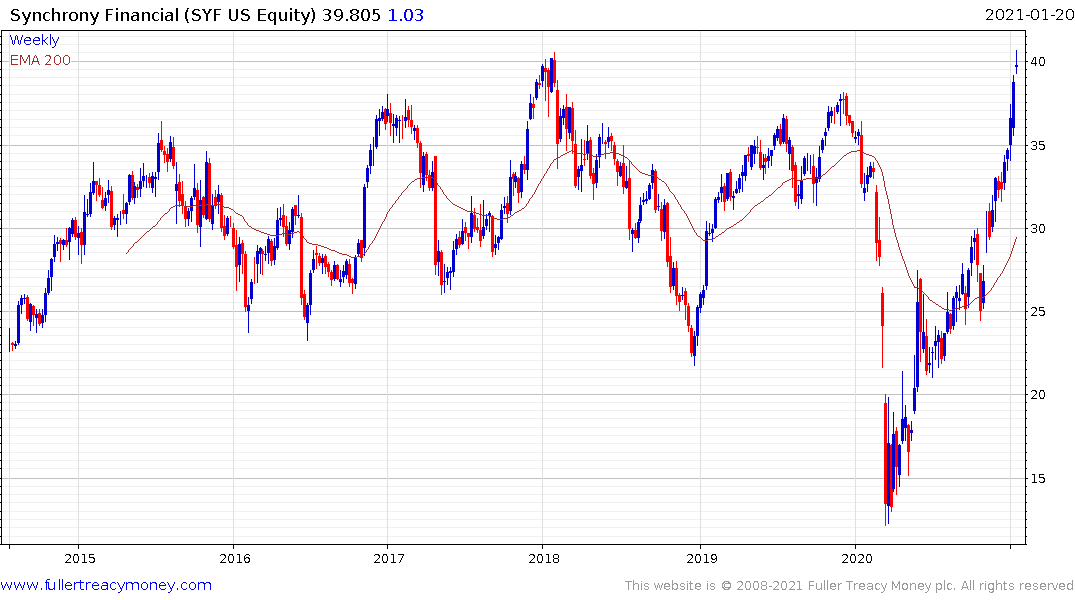 Synchrony Financial used to be GE Capital and has a large network of credit programs throughout the US. The share is breaking out to new highs and might be viewed as a reasonable barometer of the health of the US credit sector. The major banks meanwhile all have trading and investment banking operations which tend to flatter performance.