The first impact of the virus is likely toward more concentration, not less. Not only are some of the strongest players in sectors that are more positively impacted by the virus (tech, online), this environment also allows the most dominant companies with the strongest balance sheets to further consolidate their position. The market pricing is reflected this.

Once again, on a backward-looking basis, rising concentration can be linked to higher profit margins, suggesting that greater pricing power comes from having more economies of scale, less head-to-head competition with a market, and overall higher bargaining power against labor.

The table below (for the decade ending 2018) breaks down the attribution of US profit margins by sector, and is further broken down into each sector’s contribution to aggregate margins due to (1) the change in their weight in the index and (2) the organic expansion in margins. This shows that the revenue and earnings pie shifting towards these higher profit margin technology companies has been a sizeable driver of the overall increase in US listed profit margins.

Over the last few years, we have already seen popular sentiment begin to sour against the forces that have driven margin expansion, as well as against the companies that have benefitted more from them. As we have discussed at length in prior Observations, we are in the midst of a populist backlash against rising inequality and increasingly seeing a more toward more protectionism.  Surveys show increasing animosity toward globalization and the power of companies more broadly and a big more welcoming attitudes toward government regulation of firms.

There is a solid argument that the coronavirus lockdown is this generation’s Y2K. Back in the late 1990s there was a real fear electronics would stop working when the date ticked over into 01.01.2000. It prompted substantial investment in additional tech infrastructure and accelerated the rollout of the internet.

Today, we are seeing a significant rollout of cloud services, work from home routines and the rationalisation of the retail landscape where survival hinges on a successful online operation. That is certainly helping to pull forward revenues from future years into today for the tech winners. That is the primary reason for recent tech sector strength. 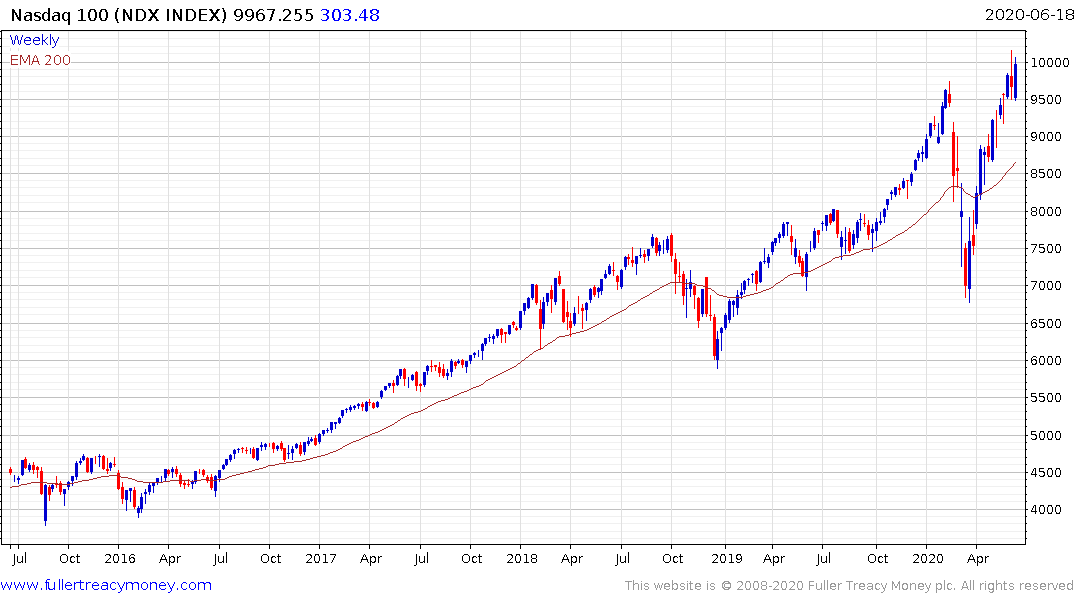 The challenge will be when the economy does in fact move into a sustained recovery. Then the constant flow of liquidity expansion followed by spending announcement will taper off. Concurrently, the higher leverage on company balance sheets will also come to be a burden. The stock market rebounds from the March lows have been characterised by similar sized reactions to date. That will need to remain the case if we are to give the benefit of the doubt to the upside.