Domestic mutual funds are flush with cash and total AUMs are currently USD 5bn which is significant for a market of this size.

In 2020 the discount rate was cut from 13.25% to 7% and in the very recent MPC press conference, the forward guidance from the Central Bank was that they want rates to remain where they are for now. Mutual funds have been caught on the wrong foot and have low exposure to equities. They will now have to chase the market higher.

The market currently trades at a PE/PB of 7.7x/1.0x. The discount to the region and its own history is excessive. Historical peaks in the past have seen the market touch much higher levels. With corporate earnings coming in strong (double-digit growth in ‘21) and a supportive economic environment driving capital into equities after a 3-year bear market a multiple re-rating is already underway. The market also has a DY of 6.5% and the currency is stable vs the USD.

Pakistan is a frontier market. That means it is heavily influenced by investor flows. Any market is priced by the actions of the margin buyer. When international investors are repatriating capital it weighs heavily on the fortunes of frontier markets but the opposite is also true. Prolonged periods of inflows can boost frontier markets to significant positions of outperformance.

Valuations can be attractive for prolonged periods but it is when the currency moves in the favour of international investors that activity really starts to pick up. At that point perceptions of whether governance is improving and whether that is sustainable will influence how durable a recovery is.

Pakistan has a new Prime Minister in Imran Khan who swiftly brought in the IMF and the country remains in that program. Anti-corruption efforts are ongoing and inevitably contentious. Quite whether the trend of governance will continue to improve remains to be seen but it is coming from a very low base. That the primary reason Pakistan has historically been a high-beta play on India. 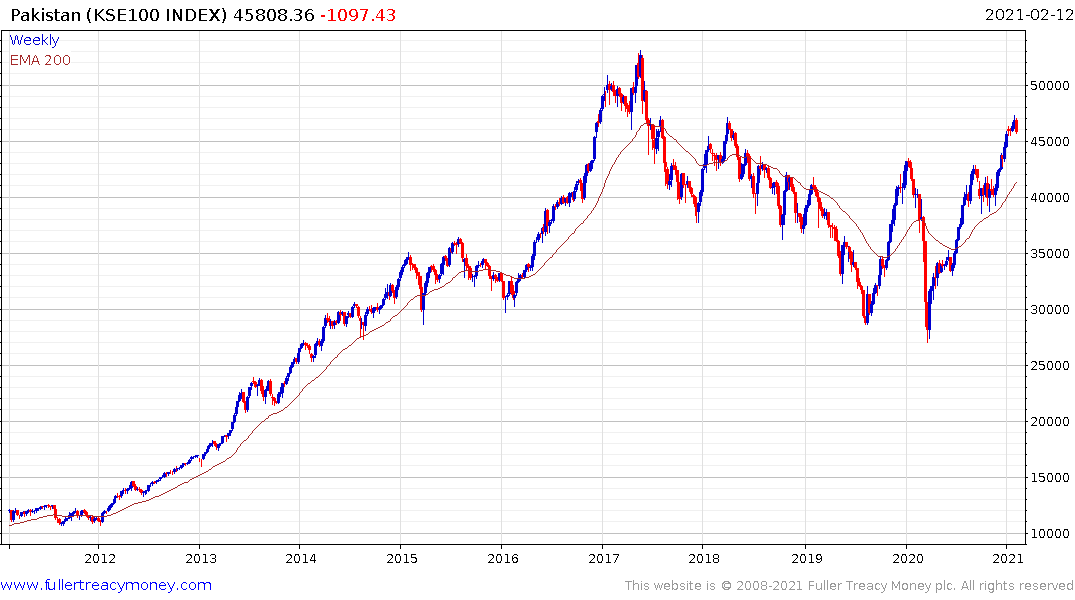 The KSE-100 is short-term overbought and as the above report highlights this is the least favourable seasonal portion of the year for investors. A reversion towards the mean looks likely. 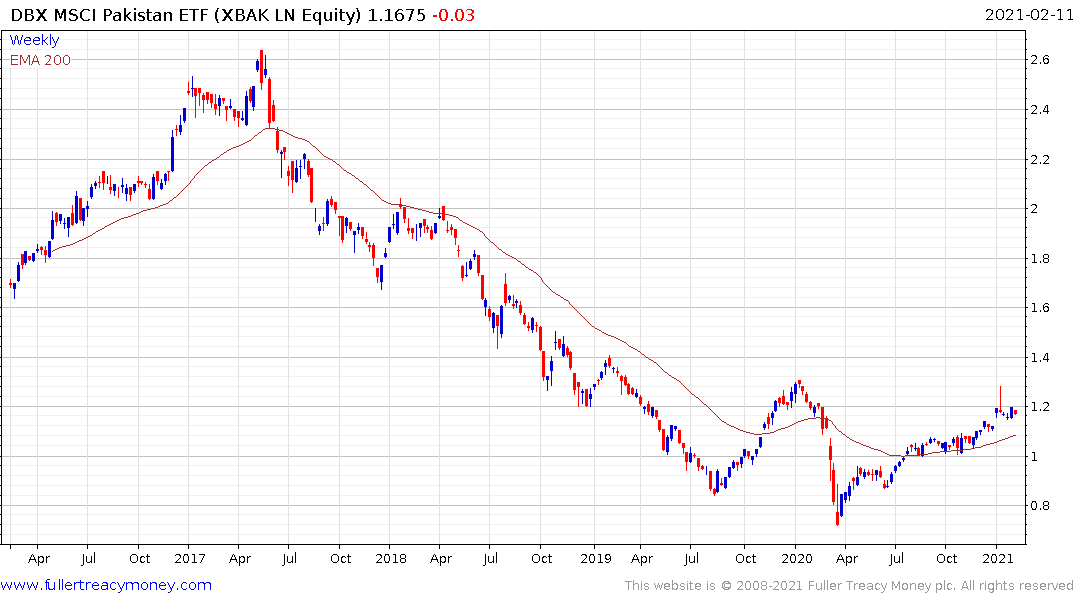 As the Pakistani Rupee has steadied over the last year, the DBX MSCI Pakistan ETF’s downtrend has lost downward momentum. It will need to sustain a move above £1.2 to signal a return to medium-term demand dominance.

From a big picture perspective, the world is awash with liquidity. Global interest rates have crashed and some of the biggest declines have been in frontier markets. That’s clearly stimulative. Meanwhile, as the global economy recovers there is clear potential that investors will move out the risk curve to capture better returns. 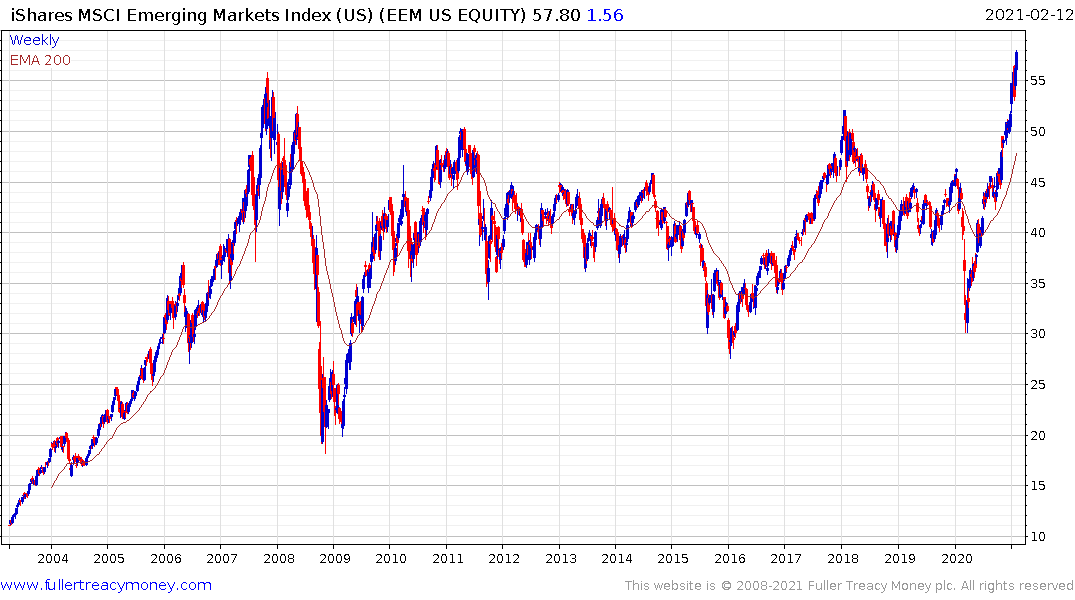 As the MSCI Emerging Markets Index breaks out it will create demand for a high beta play. The logical destination for that demand will be frontier markets. 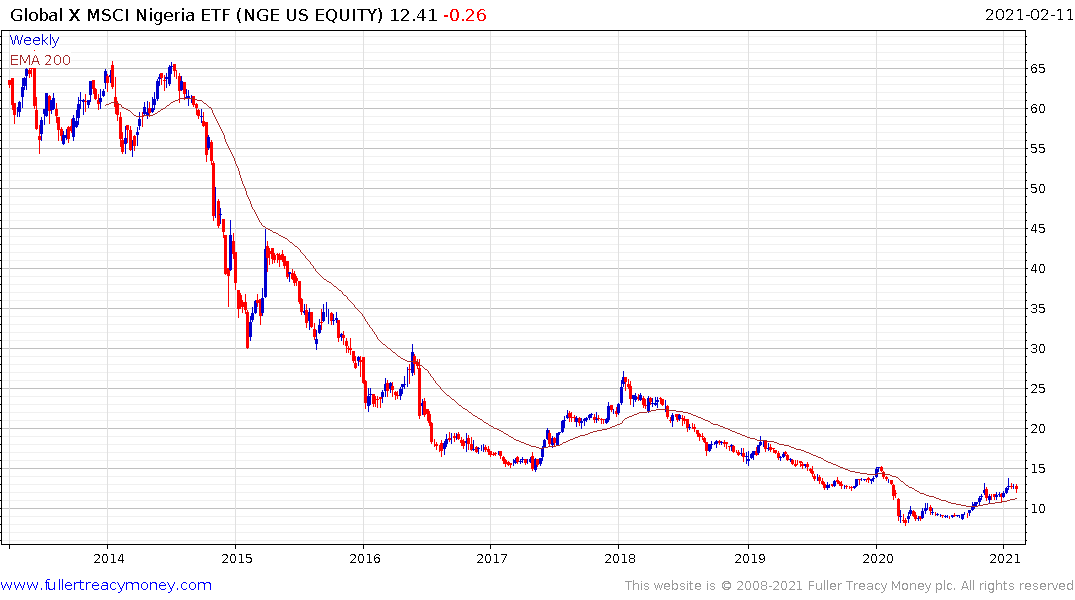 The Global X MSCI Nigeria ETF has been trending lower since 2014. It is now establishing itself above the trend mean for the first time since early 2018. 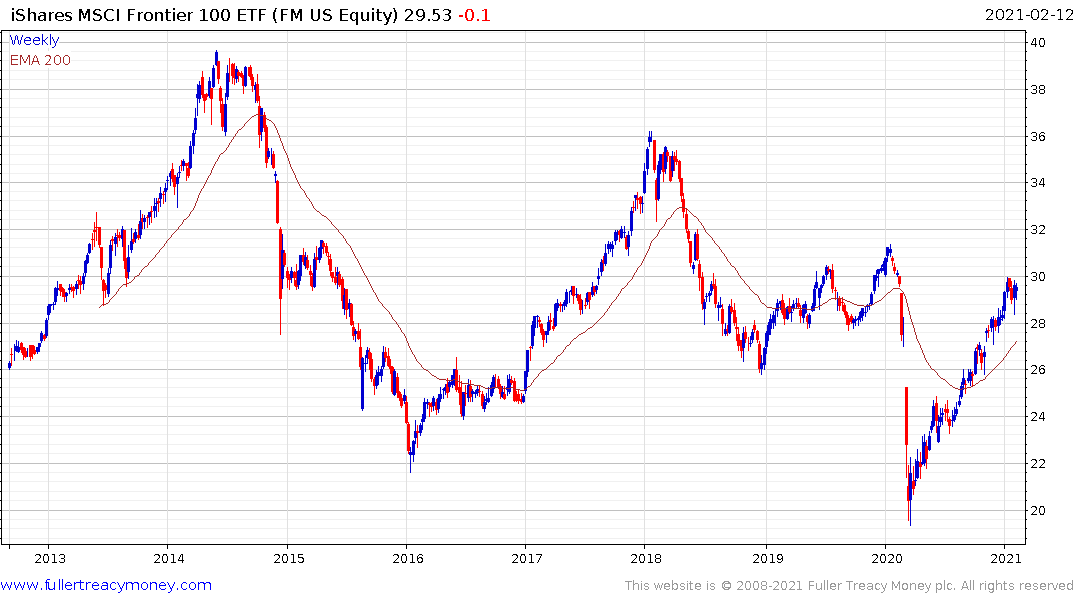 The iShares MSCI Frontier 100 ETF has 47% of its portfolio in Kuwait, Vietnam and Morocco with a spattering of holdings in Nigeria, Romania, Kenya, Bahrain, Bangladesh, Oman and Kazakhstan. T