Australia’s sovereign bond yields surged Thursday after the central bank chose not to defend its yield target, raising speculation that it could adjust its policy guidance next week.

The rate on the April 2024 note more than doubled, jumping as much as 30 basis points to 0.51%. That took the gap to the Reserve Bank of Australia’s 0.1% target to the widest since yield control was introduced in March 2020.

Governor Philip Lowe and his peers are being challenged by market expectations that they’ll need to tighten policy more rapidly than previously thought. Data Wednesday showing Australia’s core consumer prices rose at the fastest pace in six years helped spark a flattening in global sovereign yield curves, with Bank of Canada adding to the impetus by signaling a rate hike as early as April.

“I think if the RBA doesn’t step in to buy the April 2024 bonds tomorrow, then the risks are certainly increased that the RBA will announce a change to its forward guidance next week,” said Hayden Dimes, an economist at ANZ Banking Group “Not buying bonds tomorrow will fuel the markets expectation that next week Governor Lowe will move away from his guidance of no rate hikes till 2024.” 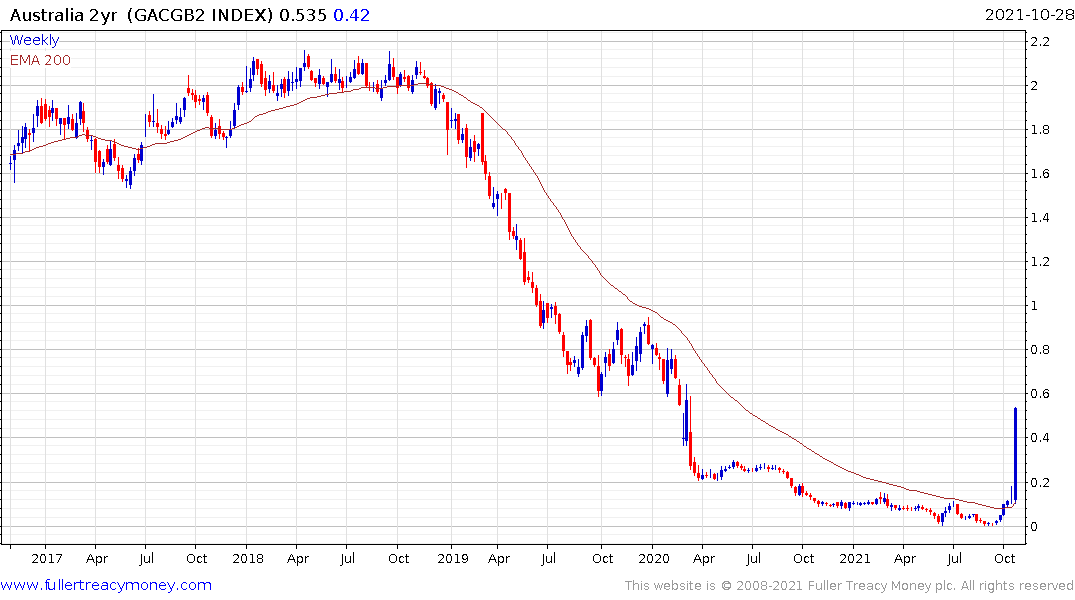 Australia’s terms of trade index surpassed the 2008 peak earlier this month. Surging prices for coal and natural gas were big contributors to that surge but those prices are now coming down so the Index has probably peaked at least for now. The challenge is that back in 2008 Australian interest rates were 7.25% and today sit at 0.1%. Even with the primary export commodities now experiencing a correction there is scope for normalization of policy. 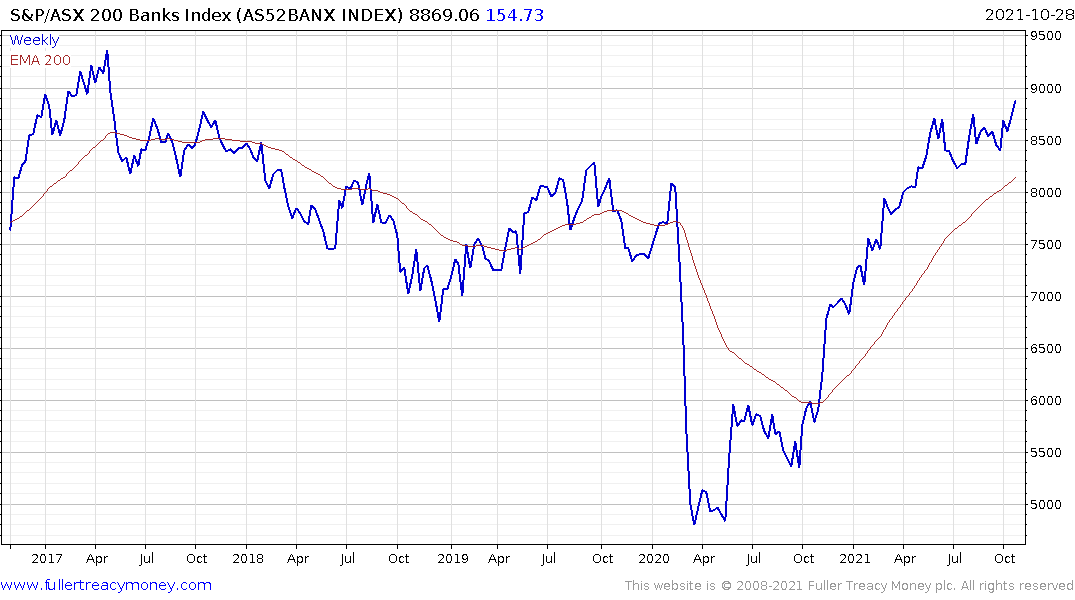 That’s a good news/bad news story. It’s positive for banks and financials and the ASX 300 Banks Index broke out to new recovery highs this week. Australia’s government has an undemanding debt/GDP ratio but the household sector has a ratio of 183% and floating rate mortgages to boot. That’s going to be an obstacle to any RBA plans to raise rates. 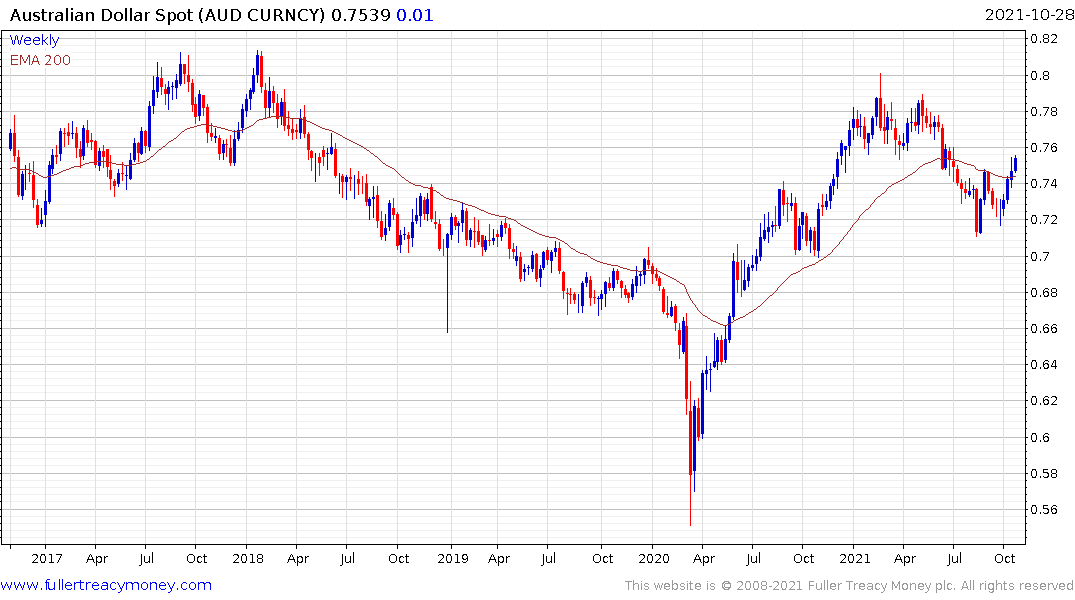 Nevertheless, the Australian Dollar is rebounding because it is more likely to raise rates than other major economies. 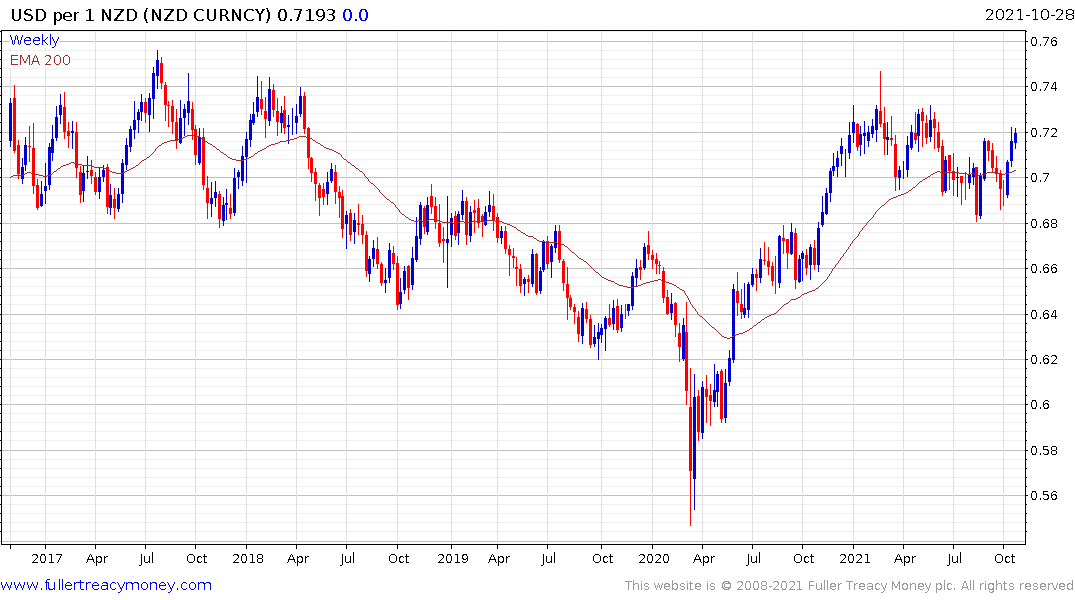 The New Zealand Dollar is also rebounding for the same reason.

Central banks everywhere are walking back their “transitory” view on inflation. Canada abandoned its quantitative easing program yesterday and accelerated the timeline to its first interest rate hike. The challenge for Canada is debt to GDP jumped to 72.2% during the pandemic and household debt sits at 112% of GDP.

Half of new Canadian mortgages are now floating rate which exposes many people who paid the most for homes to a great deal of interest rate risk. 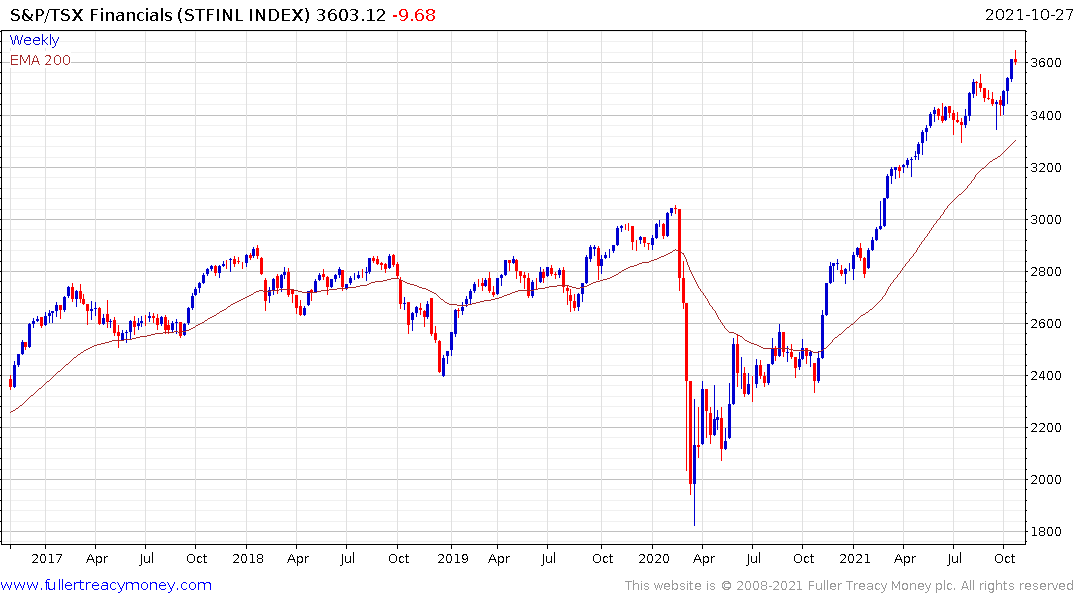 The S&P/TSX Financials Index remains in a consistent medium-term uptrend and would need to sustain a move below the trend mean to question the upward bias. 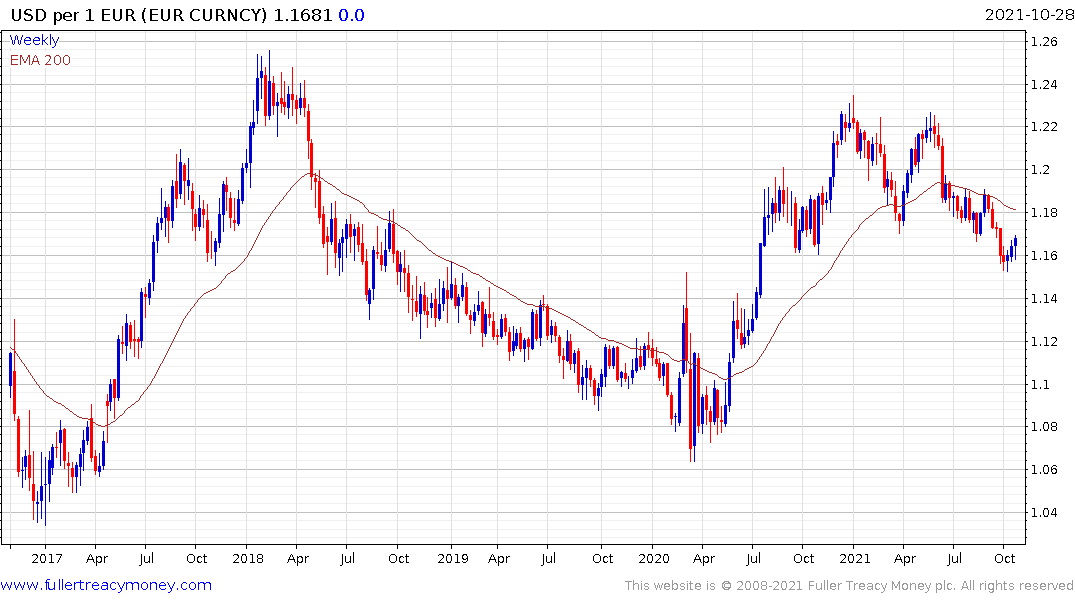 Christine Lagarde’s statements today were less than convincing that the ECB is going to sustain its transitory inflation mantra. The Euro rebounded as a result.

As we move away from a very low interest rate environment, the performance of bank shares becomes more relevant to the outlook for the wider market. They are liquidity providers and demand for credit will increase as availability of excess central bank liquidity dissipates. As long as they are trending higher, it would be reasonable to assume debt ratios are under control.