Currency war is the next phase of global conflict and Europe, the chief parasite, is defenceless
Comment of the Day

Currency war is the next phase of global conflict and Europe, the chief parasite, is defenceless by Eoin Treacy

The deflationary cancer is now so deeply lodged in the eurozone that it would take helicopter money or People's QE -- monetary financing of public works -- to fight off any future global slump. Such action would violate the Lisbon Treaty and would test to destruction Germany's political acquiescence in the euro project.

In truth QE in Europe has always worked chiefly through devaluation. The euro's trade-weighted index fell 14 percent a year after Mr. Draghi first signalled in 2014 that bond purchases were coming. That was powerful stimulus. When the euro climbed back up the eurozone economy stalled.

It takes permanent suppression of the exchange rate to keep euroland going. As the Japanese have discovered, it is very hard for an economy with near zero inflation and a structural trade surplus to stop its exchange rate from rising unless it resorts to overt currency warfare. That is exactly what Mr. Trump is not going to allow.

Every avenue of monetary stimulus is cut off in the eurozone. Only fiscal stimulus a l'outrance -- 2 or 3 percent of GDP -- will be enough to weather a serious crisis. That too is blocked.

“The ECB has masked the fragility over the last seven years and nobody knows when the hour of truth will come,” said Jean Pisani-Ferry, economic adviser to France's Emmanuel Macron and a fellow at the Bruegel think tank.

“There is no common deposit scheme for banks. Cross-border investments are retreating. The vicious circle between banks and states could come return any moment,” he said.

Mario Draghi's rhetorical coup in July 2012 worked only because he secured a partial approval from Germany for the ECB to act as lender-of-last resort for Italy's debt (under strict conditions). That immediately halted an artificial crisis. The situation today is entirely different. The threat is a deflationary slump. The ECB has no answer to this.

Markets thought they heard a replay of "whatever it takes" in Mr. Draghi's speech and hit the buy button. But economists heard another note in Sintra: a plaintive appeal for EMU fiscal union before it is too late.

The exhausted monetary warrior was telling us that the ECB cannot alone save the European project a second time.

It is arguable how much the USA needs an interest rate cut with full employment, compressed bond yields and a consumer which is in rude health. Low yields are spurring a mortgage refinancing binge and the decline in oil prices is also putting money in people’s pockets.

The 30+ day Credit Card Delinquency rate continues to trend lower and that is at least a coincident indicator of consumer financial health.

If it is arguable that the USA needs a rate cut then what is going on? The rest of the world definitely needs a rate cut and central banks are falling into line with that conclusion. With the prospect of rate cuts elsewhere, the resulting upward pressure on the Dollar would be particularly unwelcome. 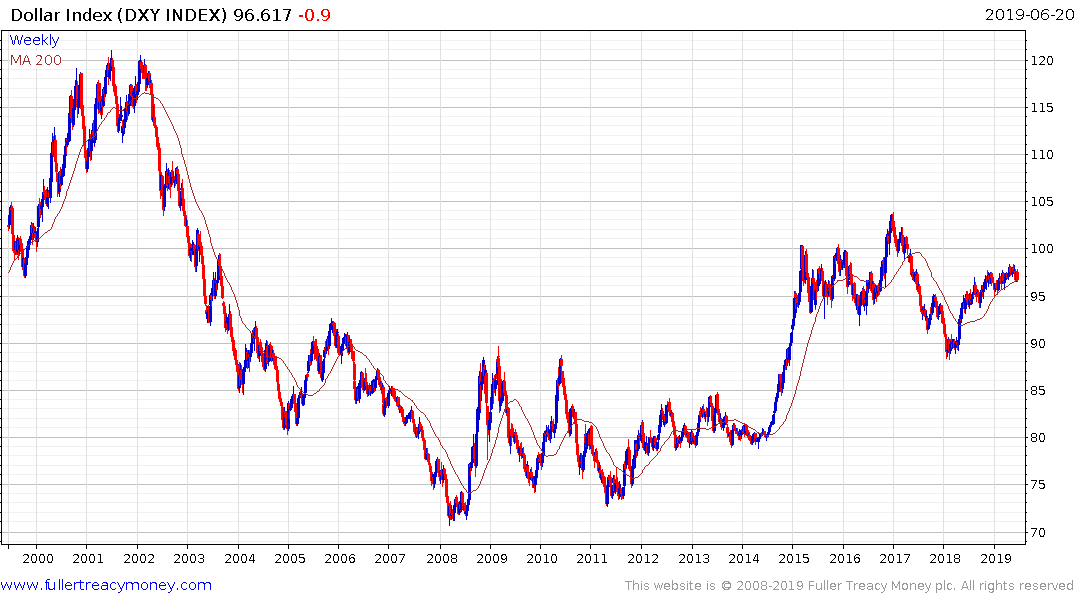 Thanks to a subscriber for this edition of the Cass Freight Index Report. Here is a section:

The DAT Flatbed Barometer indicating that capacity exceeds demand is a negative sign for the U.S. industrial economy. In line with recent rail volumes, it has started to suggest a more bearish outlook.

Recent data from the rail industry raised concern about the Industrial economy. We have asserted for years that one of the best predictive indicators of U.S. domestic industrial activity is the chemical carload volume moved via railroad. Our assertion is simple: it is almost impossible to manufacture, or even assemble, anything in mass quantity without chemicals. As a result, there has historically been a very tight relationship between the railroad chemical carload volume and the ISM Manufacturing Index.

We should note that, after reaching strong volume increases (up 5.0% to 8.5% YoY in January and early February), the last half of February through early April dropped to levels >5.0% below on a YoY basis, severe enough and for a long-enough period to add merit to a more bearish forecast. Whether it was because of, or the consequences of, the absence of trade agreements and ongoing trade talks (which we assert are the primary cause for the slowdowns in international airfreight), it suggests that the global slowdown is spreading to the U.S. industrial economy.

There is no doubt that the unwinding of the massive inventory build late last year has affected the transportation sector this year. Now that it is back to trend, we should begin to see stabilisation. I wonder how much of the slowdown risk which is so pervasive right now is a reflection of that unwinding.

Therefore, the Fed’s decision to signal an interest rate cut next month is as much about balancing domestic factors as it is about reacting to the international trends towards lower rates and further accommodation.

The USA might be running massive deficits but its continued economic outperformance would put  upward pressure on the Dollar, so we are seeing increasing evidence of measures to dampen its rise. No country wants a strong currency and increasingly we are seeing more active measures to reduce the purchasing power of fiat currencies. That is clearly signalling the risk of currency wars because we are a long way from the kind of international co-operative environment that could result in multilateral intervention. 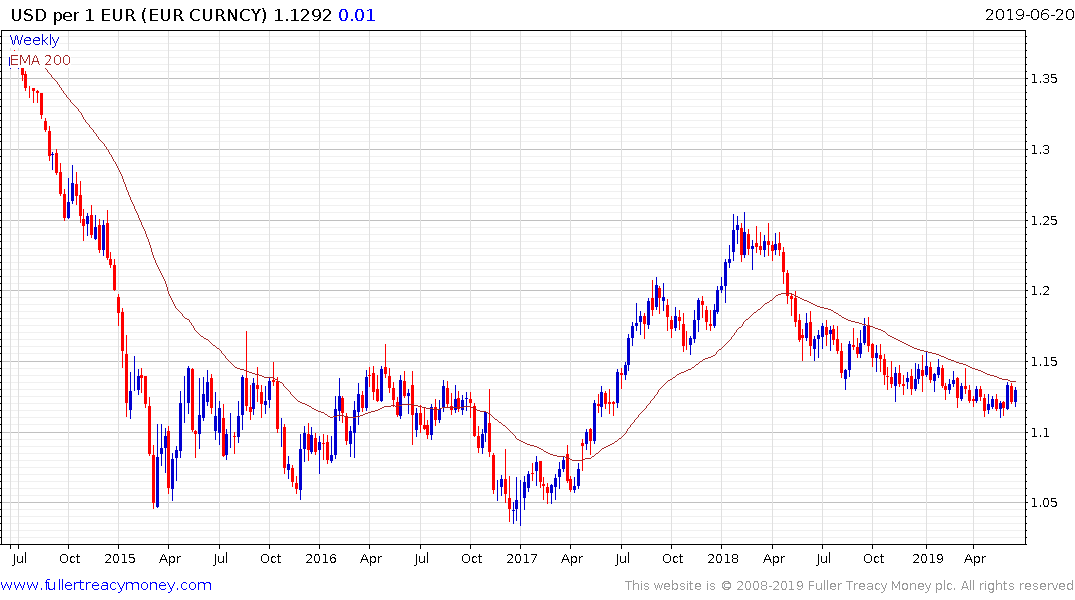 The Euro has now posted a higher reaction low against the Dollar and a sustained move above $1.1350 would signal a return to demand dominance beyond the short term. 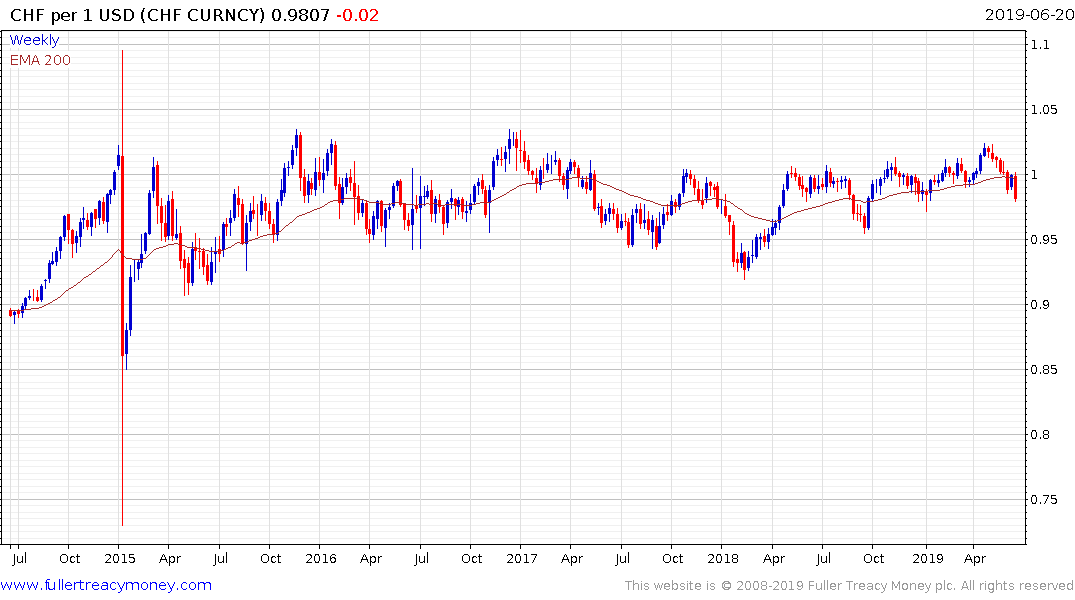 The Swiss Franc, supported by the SNB’s 120% of GDP holdings of international equities, rallied to break the Dollar’s sequence of higher reaction lows today. 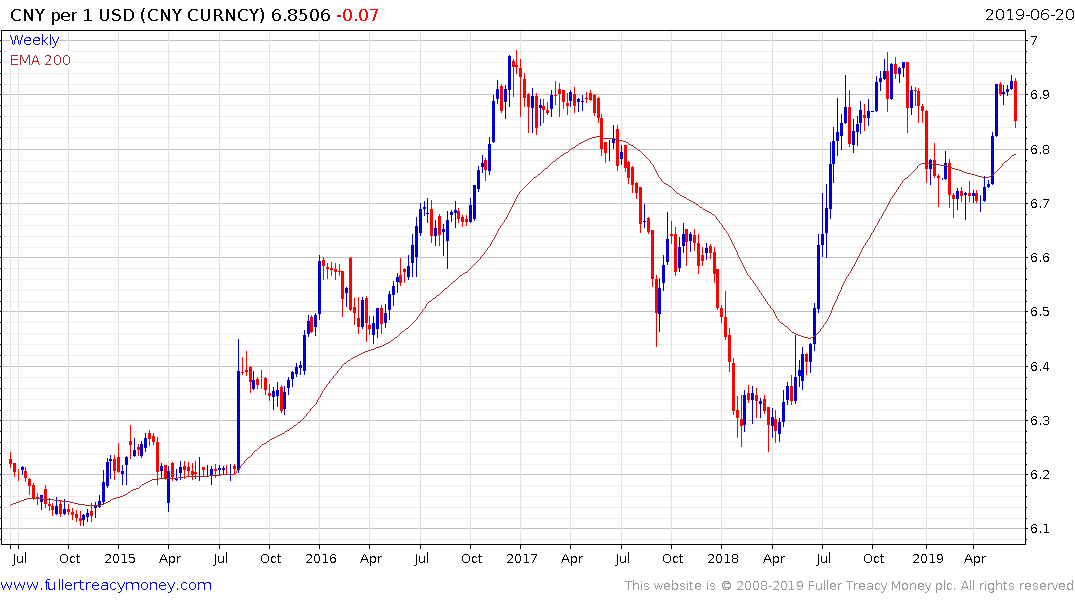 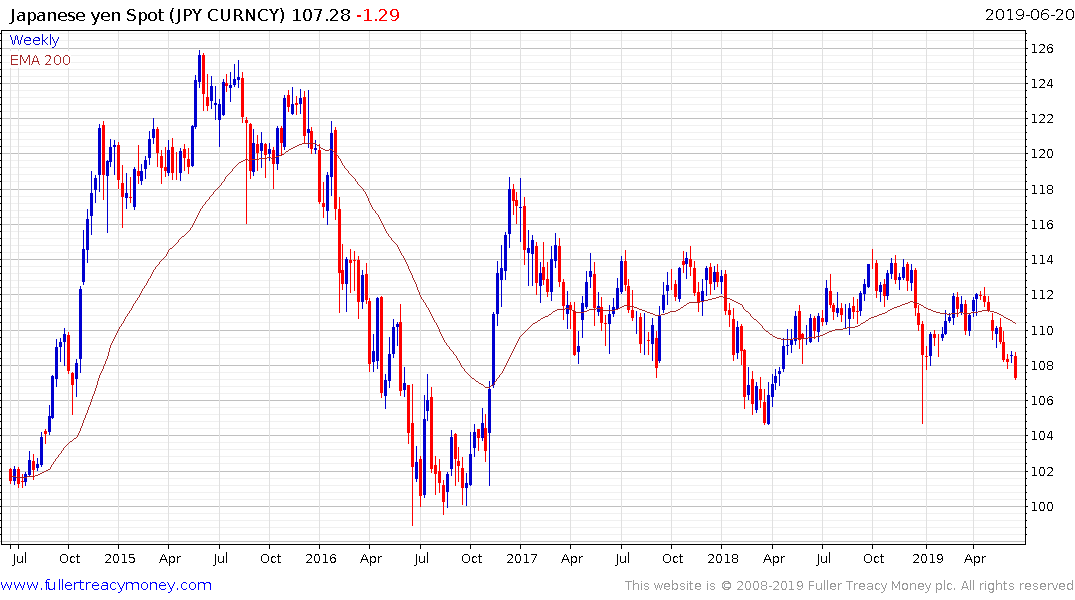 The Japanese Yen extended its rebound against the Dollar as it trends towards the spike highs seen at the turn of the year. 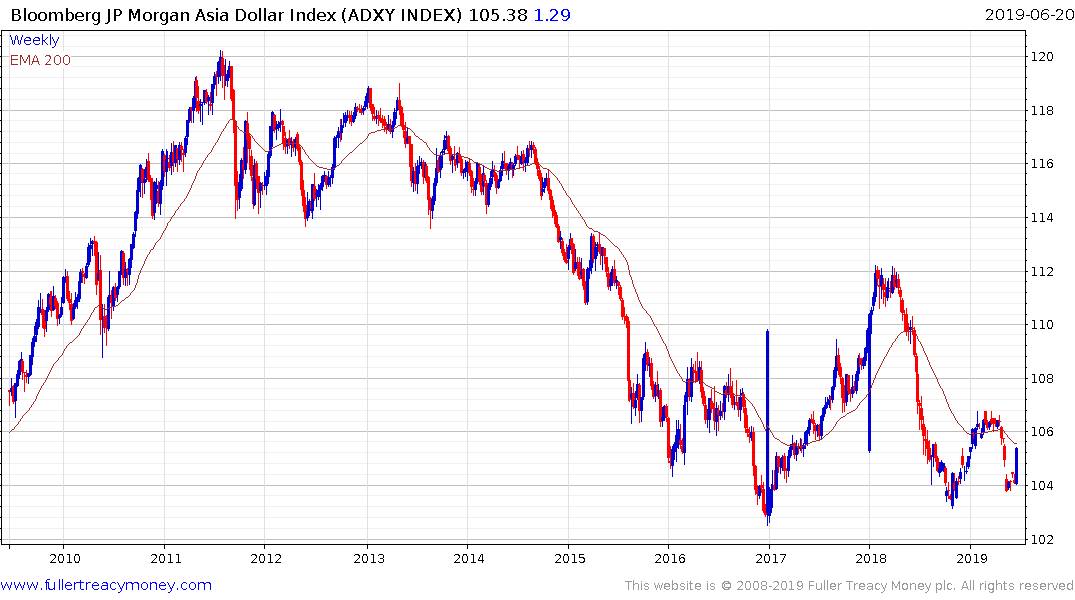 The Asia Dollar Index has posted a clear upward dynamic from the region of the 2017 and 2018 lows to confirm support building.