“Crypto lending might be the easiest way for the SEC to get its hooks into the industry, but it’s very clear they’re looking at cryptocurrencies themselves,” said Tyler Gellasch, a former counsel at the SEC who heads the Healthy Markets Association, whose members include large asset managers. If many cryptocurrencies are deemed securities, exchanges such as Coinbase and the rest of the crypto industry “will not be able to make money the way they do today.”

Crypto lending incumbents, such as BlockFi Inc. and Celsius Network Inc., have already garnered more than $35 billion in deposits of traditional cryptocurrencies such as Bitcoin, as well as stablecoins, whose values are pegged at $1 and are considered a replacement for fiat money.

Crypto industry executives have said they suspect rival firms in the traditional finance industry, such as large banks, are responsible for pushing regulators.

In a September “Ask Me Anything” event with customers, Celsius Network Chief Executive Officer Alex Mashinsky said he believed bank executives had called the SEC and state regulators to complain about crypto lending firms.

“We have to work twice as hard because these guys have the largest lobbyists working for them at both at the state and the federal level,” Mashinsky said. “We’ll prevail. The fight is over all the money in the world, right?”

When the chairman of the SEC talks about the cryptocurrencies in the same terms as the myriad number of competing currencies in the USA ahead of the Civil War, that’s not good news for the sector. It suggests the freewheeling days of launching a token for any purpose one can dream of are numbered. 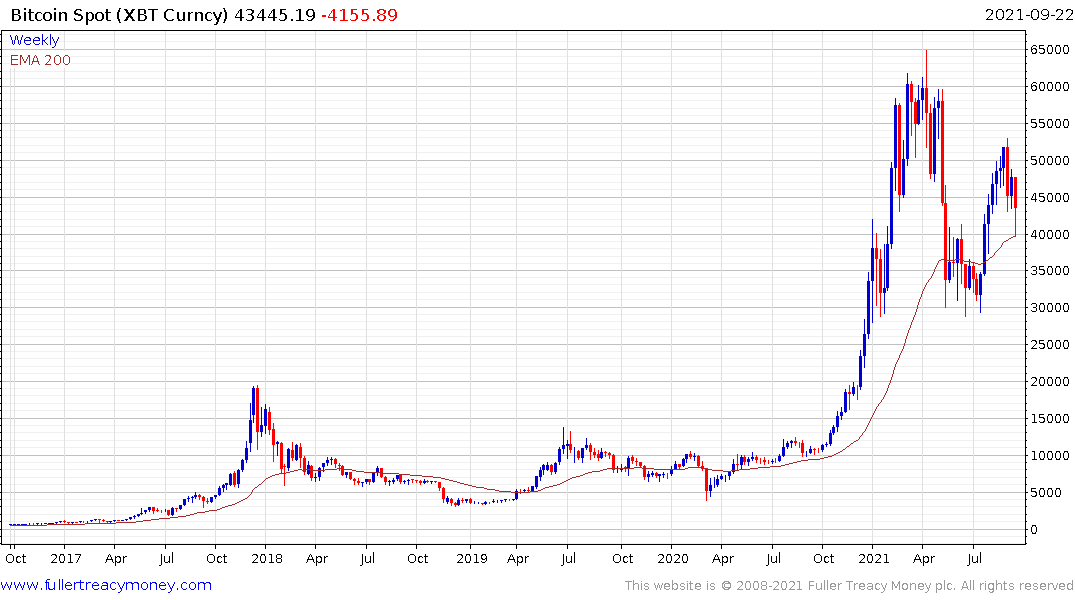 It also suggests there will be a narrowing of speculation, with interest flowing back to the larger projects like Bitcoin and Ethereum. That held lend support to bitcoin today from the upper side of the underlying range near $40,000.

The prospect of regulation also brings forward plans to create a digital dollar. The war on cash has been going on for decades. Politicians want to ensure they can collect all taxes potentially owed. Digital transactions are a lot easier to track than cash. That fact alone makes digital currencies more attractive. Even without a digital currency there are clear efforts underway to monitor all transactions passing through bank accounts for whatever reason. https://www.ky3.com/2021/09/16/fact-finders-does-irs-have-more-power-snoop-your-bank-account/

The additional power to influence the economy a digital currency would convey also makes them attractive for central banks. In many respects the dollar is already set up digitally. As more payments become digital, the central bank gains much greater insight into money flows and velocity. The pandemic was the first step in putting money in people’s pockets. The next crisis will likely force them to use it or lose it. That view is supported by the fact that trillions in stimulus were saved by consumers which blunts the effectiveness of the efforts.

This article from The Economist in 2018 discusses how only 2% of Chinese citizens pay payroll taxes. Efforts to collect more taxes and to clamp down on avoidance have been underway for the last few years. It is therefore little wonder that China is at the forefront of pioneering digital currencies.