In the next crisis, when the negative interest rates become even more extreme and also hit private customers, they will react similarly, according to the experts of the Monetary Fund. Their "solution" is to massively restrict the use of cash in order to make it more difficult to escape expropriation through interest rate policy. Ironically, they even want to introduce an "electronic currency". With that in place, negative interest rates can be easily implemented according to economists. At the same time, they have in mind a two-tier society. Anyone who wants to pay cash in the supermarket could do so - but with a penalty surcharge. This “nudging” will herd us all into the clutches of the state electronic monetary system that they have in mind.3

Luckily, nothing is eaten as hot as it is cooked. These ideas are neither economically sound nor politically feasible. But the proposal should serve as a warning to us. By now it should be clear why Bitcoin is here to stay. Why it's needed. It's the antidote to such crazy ideas. Bitcoin makes it possible to get out of a system that is becoming increasingly hostile towards the users.

The same argument has been used by gold bulls over the last couple of decades but it has merit for all assets that sit outside the ability of central banks to lend into existence.

The buying of bitcoin in anticipation of the launch of futures contracts and the subsequent collapse was reminiscent of the 1987 crash. Back then it was index futures and everyone tried to hedge long exposure at the same time which crashed the market. The majority of positions opened on bitcoin futures were used as hedges against long positions and created a massive synthetic short which crashed the market.

The removal of those futures returns bitcoin to its unleveraged status which suggests log scale charts will be most useful. Meanwhile the entry of companies like Fidelity and JPMorgan aim to solve the custody problem which has deterred institutional investors from participating in the crypto market. If Fidelity for instance begins to offer custody services for bitcoin that will represent a green light for further investment on a large scale. 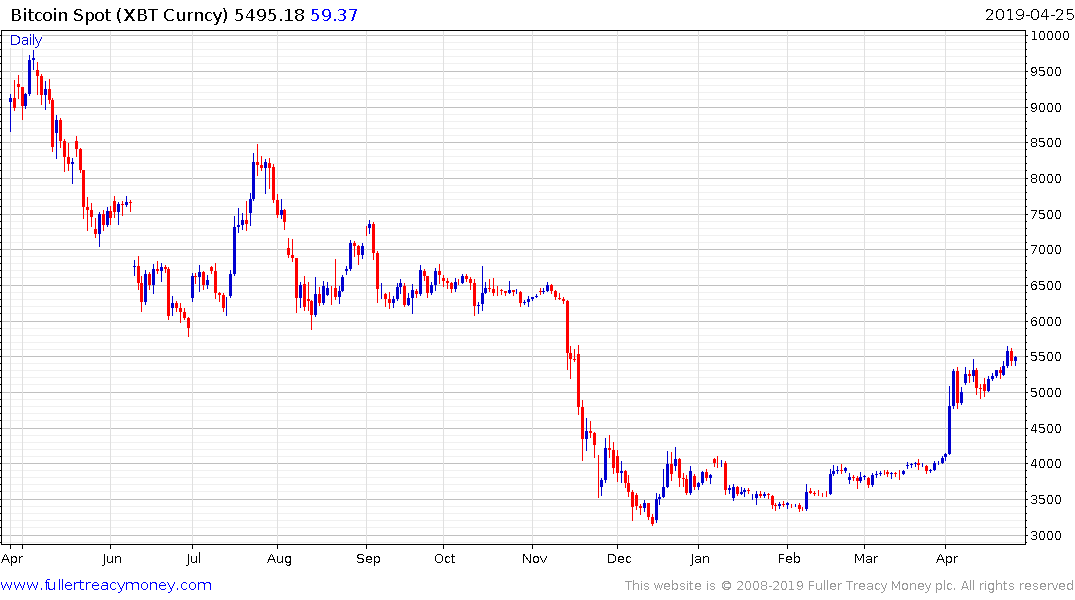 The price of bitcoin appears to be in the process of forming a first step above its base.