China is encouraging companies to buy U.S. farm products, and will exclude them from added tariffs. Many crop prices are heading for their best week since at least June on optimism that Beijing and Washington are inching toward a deal. The year-long trade spat has undercut farmer profits and boosted debt levels in the U.S. as Chinese demand fell off.

There was evidence of fresh Chinese buying Friday as the U.S. government reported 204,000 tons of soybeans sold to the Asian nation, the first such announcement in more than two
months.

“We are hopeful that this apparent gesture of goodwill by China leads not only to more sales of U.S. pork, but that it contributes to a resolution of U.S.-China trade restrictions,” said David Herring, a North Carolina hog farmer and president of trade group National Pork Producers Council.

The balance of the trade war hangs in how much domestic damage can be tolerated versus damage inflicted on an adversary. Food price inflation for China may be of a more urgent dilemma than the trade war at present. China is nowhere near being self sufficient in soy and the scourge of African swine flu has destroyed the domestic pig industry. Since pork is the staple protein for a significant proportion of the population that represents an issue not least as prices surge. 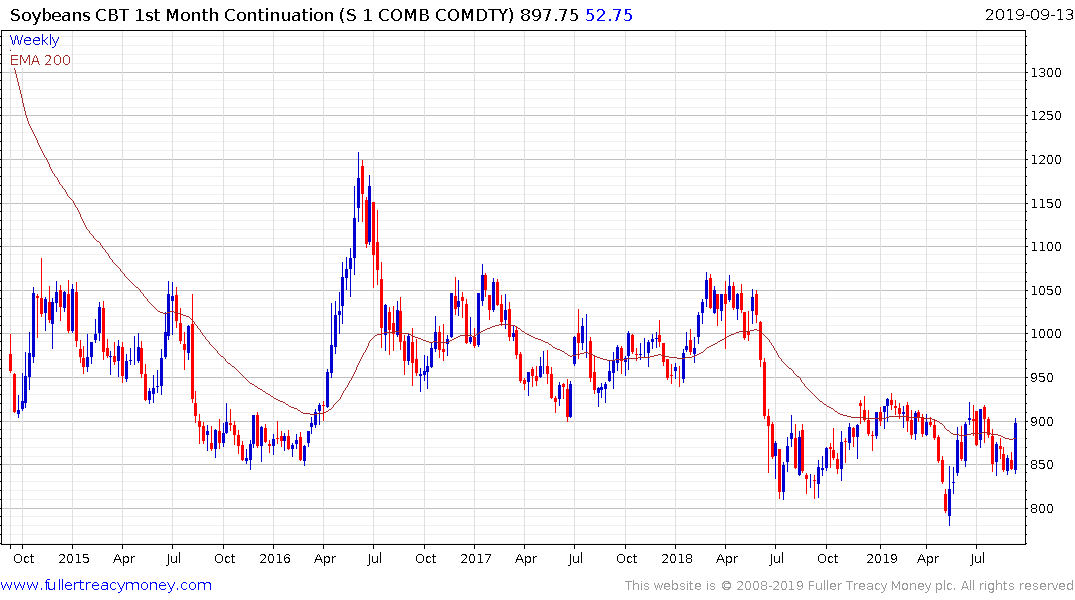 Meanwhile, the USA is the largest agricultural exporter in the world with ample supplies for both soy and pork. Soybeans firmed this week to post a higher reaction lows and a sustained move below 850 would be required to question current scope for additional higher to lateral ranging. 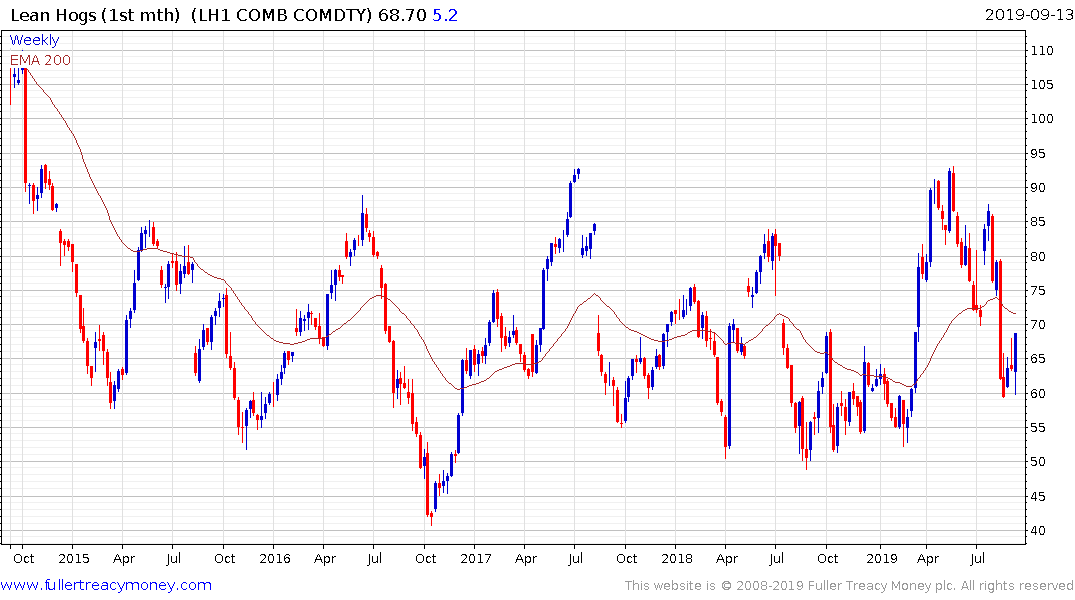 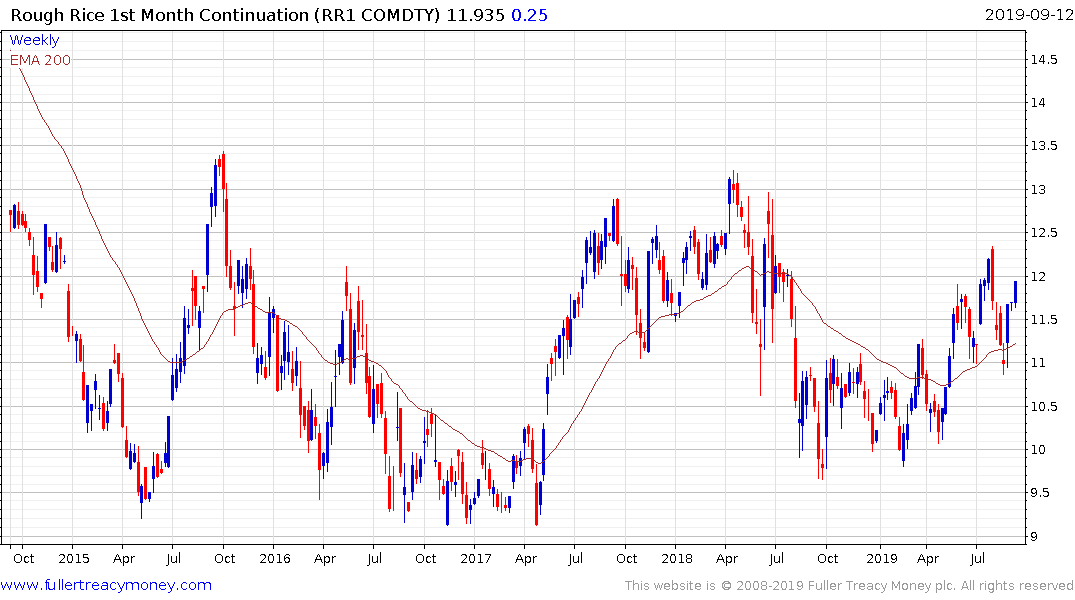 Rough Rice is firming within its four-year base formation and a sustained move below the trend mean would be require to question current scope for additional upside. 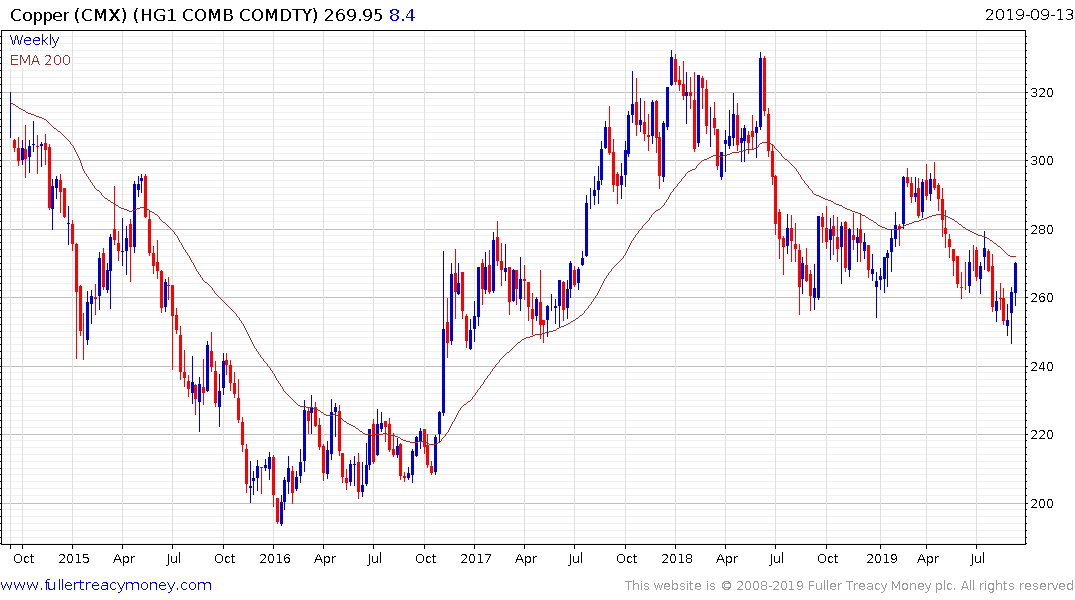 Copper failed to sustain the move intraday move below $2.50 and has rebounded over the last couple of weeks to test the region of the trend mean. As long as that lower bound holds the potential for a further rebound is still credible.

Signs of life are beginning to reappear in the cyclicals sector represented by commodities, transportations, semiconductors, small caps and banks. The underperformance of these sectors over the last 18 months has been one of the primary trends which has worried investors that a recession was imminent. 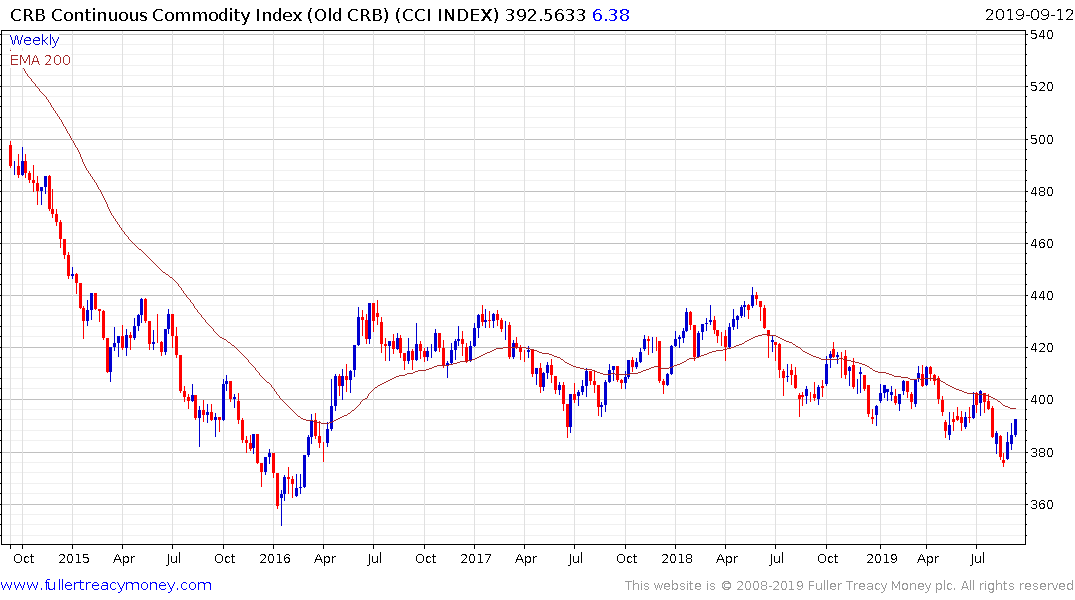 Commodities in particular tend to perform rather well in the latter stages of a bull market and that has not yet occurred. That generally coincides with an inflationary scare and with Core CPI approaching 2.5% in the USA, that is a growing consideration.

The Continuous Commodity Index has rallied over the last few weeks to challenge is sequence of lower rally highs but will need to break it to signal a return to demand dominance beyond short-term steadying.