Contagion experts Peter Sandman, Ian Mackay, and Jody Lanard sum up my view in this passage from Past Time to Tell the Public: It Will Probably Go Pandemic, and We Should All Prepare Now:

“We are near-certain that the desperate-sounding, last-ditch containment messaging of recent days is contributing to a massive global misperception about the near-term future. One horrible effect of this continued 'stop the pandemic' daydream masquerading as a policy goal: it is driving counter-productive and outrage-inducing measures by many countries against travellers from other countries, even their own citizens back from other countries.

“But possibly more horrible: the messaging is driving resources toward 'stopping' and away from the main potential benefit of containment – slowing the spread of the pandemic and thereby buying a little more time to prepare for what’s coming.”

For readers who can spare the time, I suggest tuning out media noise – much of it dwelling on the malevolent distraction of which individual may have been spreading Covid-19 – and going straight to research papers being released daily by PubMed Central, the data bank of the US National Library of Medicine.

That way you avoid the sort of misunderstanding I just heard on the BBC, which stated that the death rate is comparable to flu. No, it is not. The average morbidity of flu annually is 0.1pc; Covid-19 is an order of far greater magnitude.

The latest tracking data as of Feb 22 (unreliable, but the best we have) is that the mortality rate is 4pc in Wuhan, 2.8pc in Hubei, and 0.8pc in other regions of China, though all figures are creeping up as slow deaths hit the data.

There can be long lag times after infection so it is too early to infer ratios from South Korea, Italy and Iran, but this is surely more like the Spanish Flu of 1918 than anything we are used to. Chinese data suggests that roughly 14pc of those infected over the age of 80 are dying.

You can read most of the PubMed abstracts free and can see what is coming out of labs in China – some of them excellent – or in Hong Kong, Korea, Japan, Europe and North America. There are already 80 peer-reviewed papers. The unfiltered findings are arriving almost in real time. They give you an extra edge.

The annual seasonal flu becomes a pandemic every year. The coronavirus shares enough similarities with the flu in how it spreads to become a pandemic. Meanwhile, it is far more deadly. 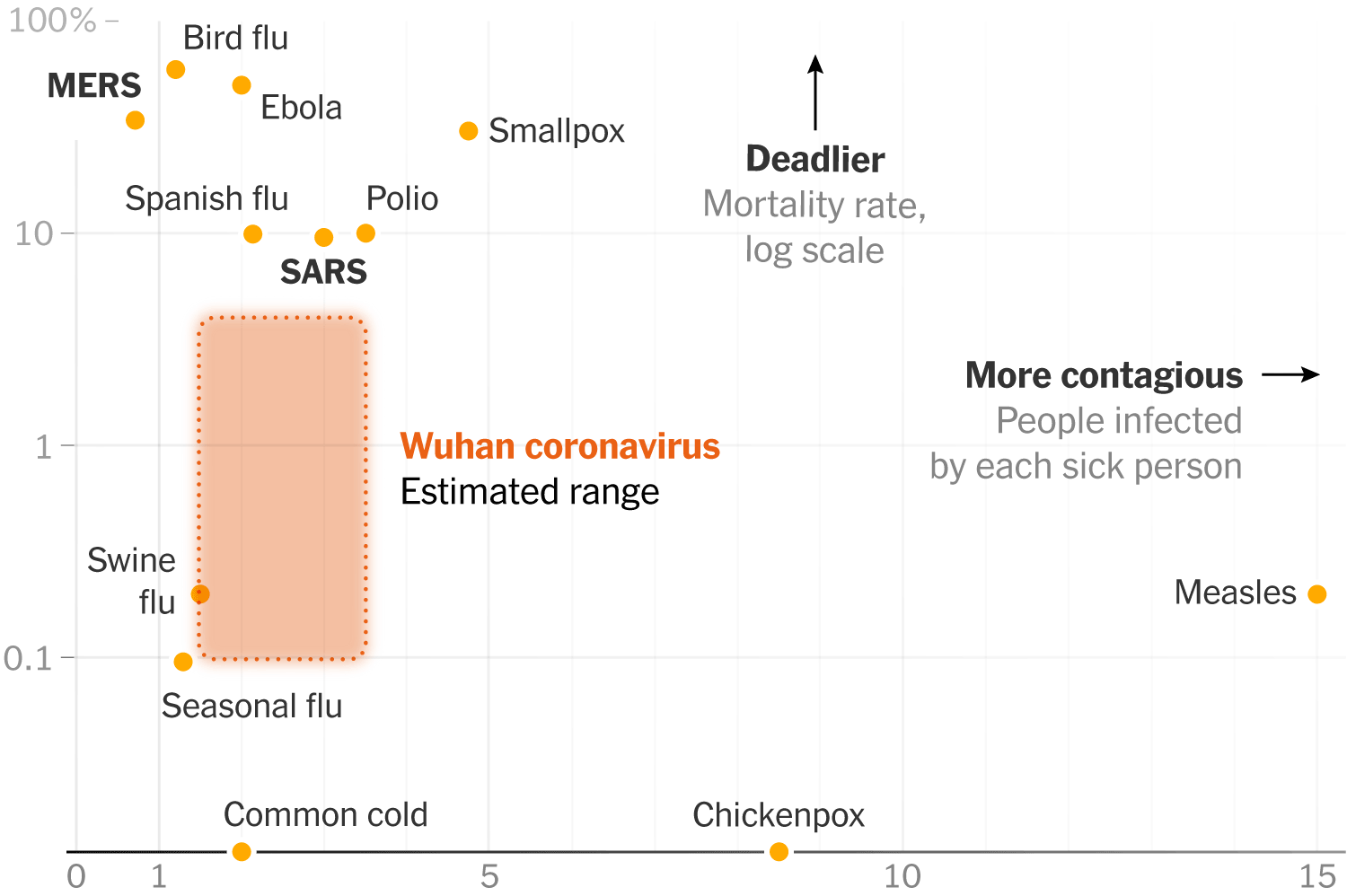 This graphic, produced by the New York Times a few weeks ago gives us a good picture of what we are dealing with. The mortality rate is anything from 8 to 40 times more deadly than flu while the transmission or contagion factor is about the same or higher.

The WHO mentioned yesterday that Gilead’s Remdisiver is the only treatment option right now. Meanwhile, Moderna is now trialling a vaccine.

There are two ways of looking at this. The first is to conclude it will also be over soon as new medications stem the death toll. The second is to pay attention to what Xi Jinping is saying:

“It is unavoidable that the novel coronavirus epidemic will have a considerable impact on the economy and society,” Xi said in a televised address this weekend. He said the economy “can’t be paused for a long”.

Putting almost the entire Chinese economy on hold is inordinately expensive and is going to cause significant debt distress the longer it persists. The development or a treatment plan, any treatment plan, will embolden Beijing to give up on containment. Treatment is less expensive and more practical than containment if there is little chance of stopping the spread of the virus.

The realisation that this virus is less like SARS and more like the Spanish flu is now being priced into markets. 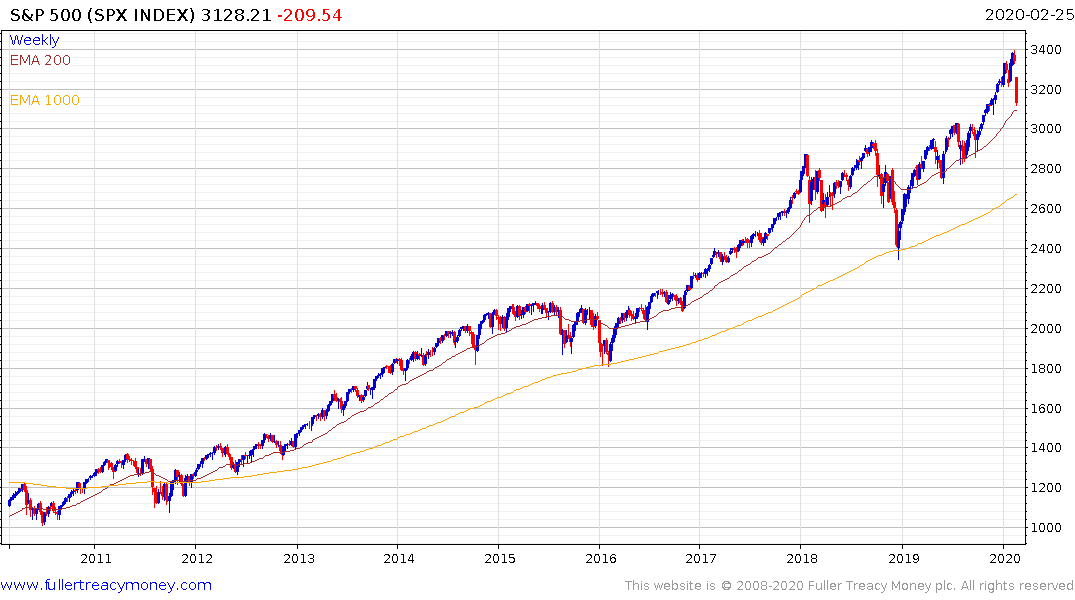 3000 on the S&P500 is the upper side of the underlying range and is slightly below the 200-day MA. That’s less than 5% from where the market closed today.

The consistency of the decade-long uptrend is three medium-term corrections, each lasting about 18 months, followed by impressive and persistent trending phases.

Each one of those ranges was resolved following an approximately 3-month consolidation in the region of the peak which acted to unwind a short-term overbought condition relative to the trend mean.

Each of the breakouts were sustained and the subsequent advance persisted for between one and two years.

The most recent range was resolved with an emphatic breakout in October. If this trend is going to remain consistent the 3000 level will hold.

However, to get there on this occasion would represent a significant inconsistency in the overall trend. The market’s ability to find support between now and then will be heavily influenced by the supply of liquidity. 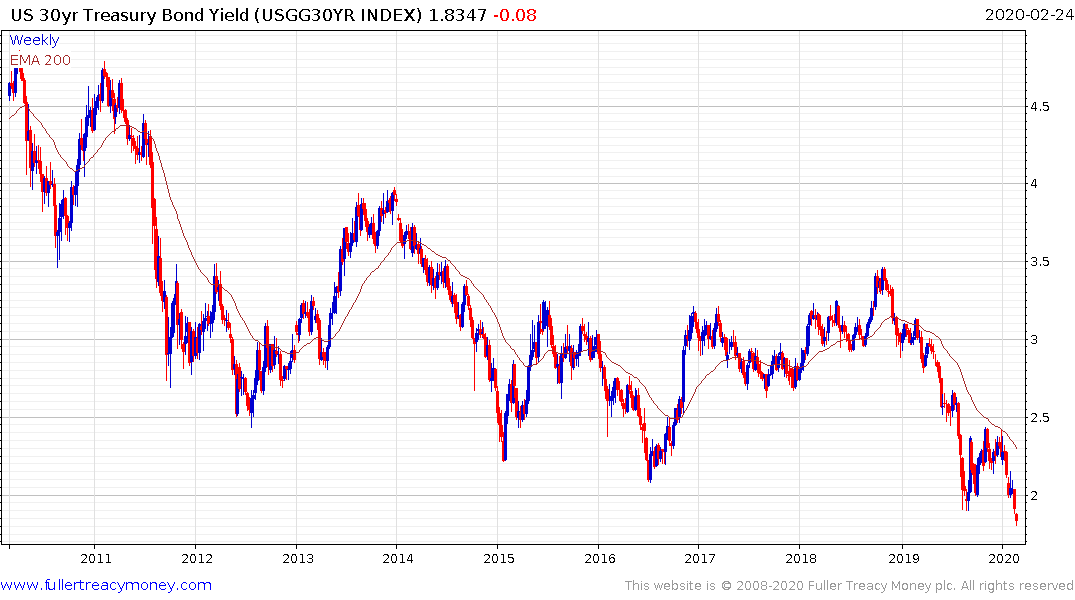 I believe it is more likely than not the Fed will be forced to cut rates in March. The collapse in Treasury yields, with the 30-year rapidly extending the break to new lows, is rapidly pricing in significant deflationary forces.