“It’s probably a combination of more pigs, chickens and cows eating corn, and USDA overestimating last year’s production,” said Dale Durchholz, the senior market analyst at AgriVisor in Bloomington, Illinois. “Supplies are tighter, and God forbid we have any hot, dry weather in July that damages this year’s crop.”

Feed and residual use for the grain in the three months ended in May climbed 31 percent, according to AgriVisor. The inventory of broilers, dairy cows and hogs suggests that such demand could be as much as 200 million bushels larger than the 5.25 billion bushels projected by the USDA, said Durchholz.

As of Sunday, 68 percent of the corn crop was rated in good or excellent condition in the top 18 producing states, down from 75 percent a year earlier.

Wet fields and declining crop conditions suggest a national yield at 162 bushels an acre, below the USDA’s estimate of 166.8 bushels,  Mark Schultz, the chief analyst for Northstar Commodity Investment Co. in Minneapolis, said Tuesday. That would leave a carryover next year of 1.2 billion bushels, below the 1.771 billion that the USDA forecast on June 10.

?“The tightening supply and deteriorating crops in the field are a big change from the outlook a month ago,” Schultz said. “Most livestock producers were waiting for lower prices into the harvest, and now they will be scrambling to extend purchases.”

El Nino is a major weather phenomenon and this year’s event is expected to be stronger than normal. With droughts in some parts and floods elsewhere the potential for crop yields to undershoot is being priced into agricultural commodities. There has been a significant rally in corn, wheat and soybean prices which is a little overbought in the short term. There is room for some consolidation but clear downward dynamics would be required to question potential for some additional upside. 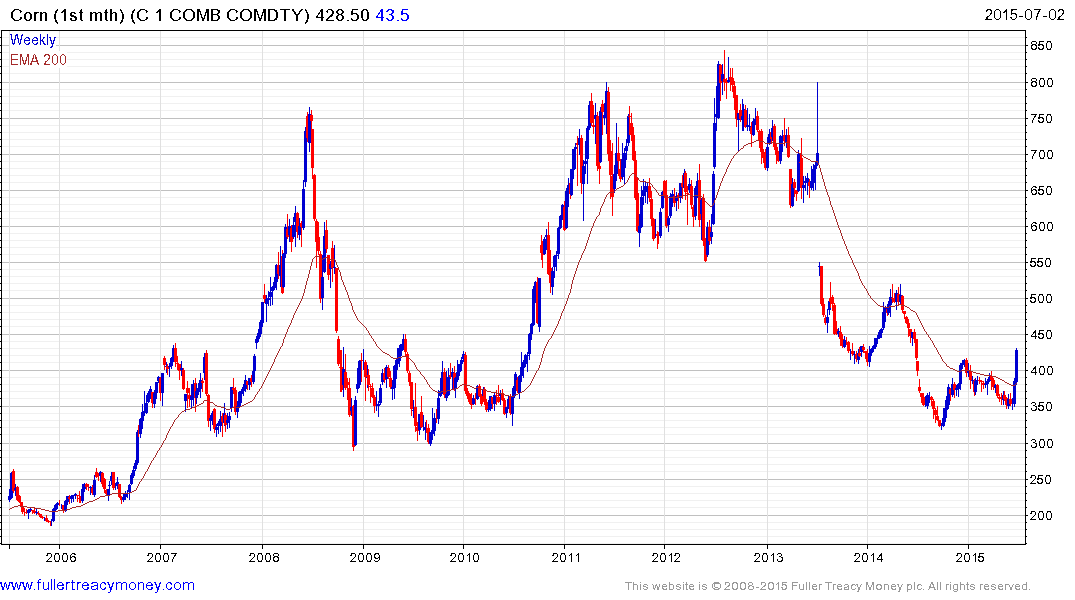 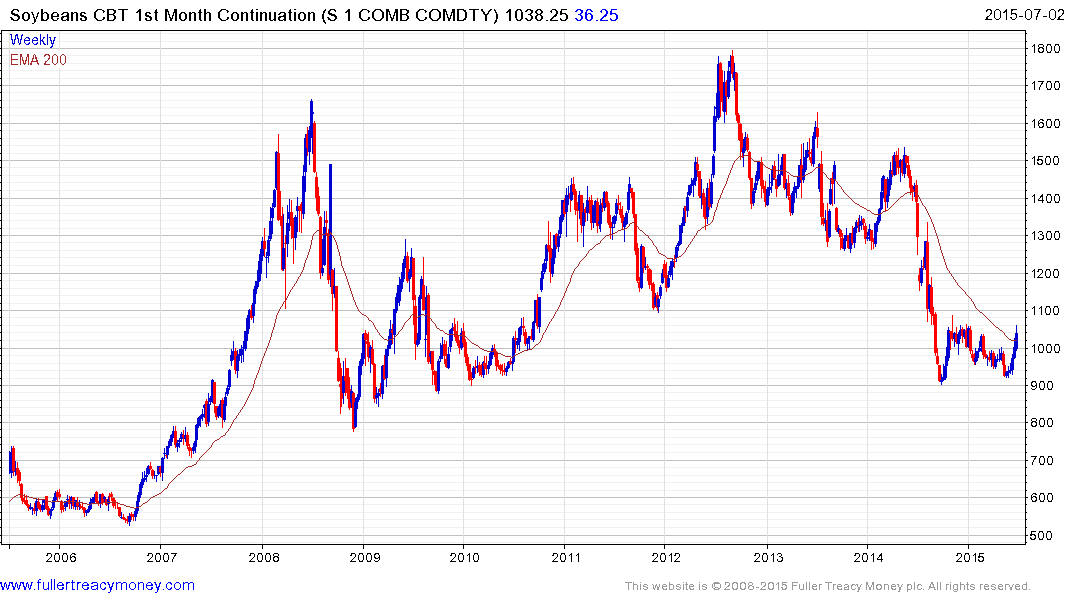 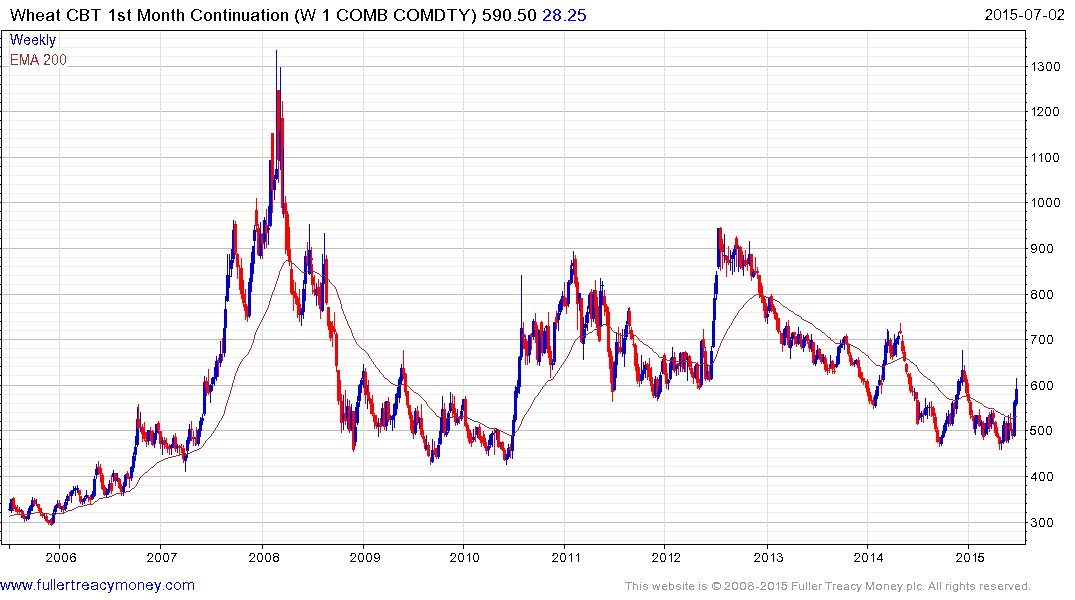 Sugar prices have been trending lower for nearly five years and are now testing the medium-term progression of lower rally highs. 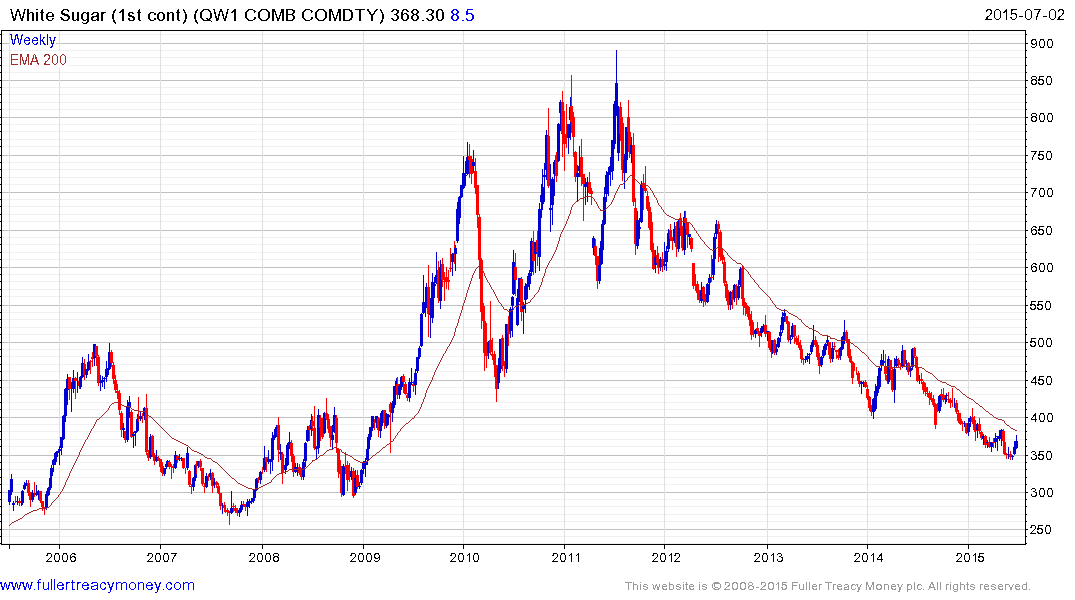 Cotton exhibits a rounding characteristic consistent with accumulation and broke back above the 200-day MA this week. 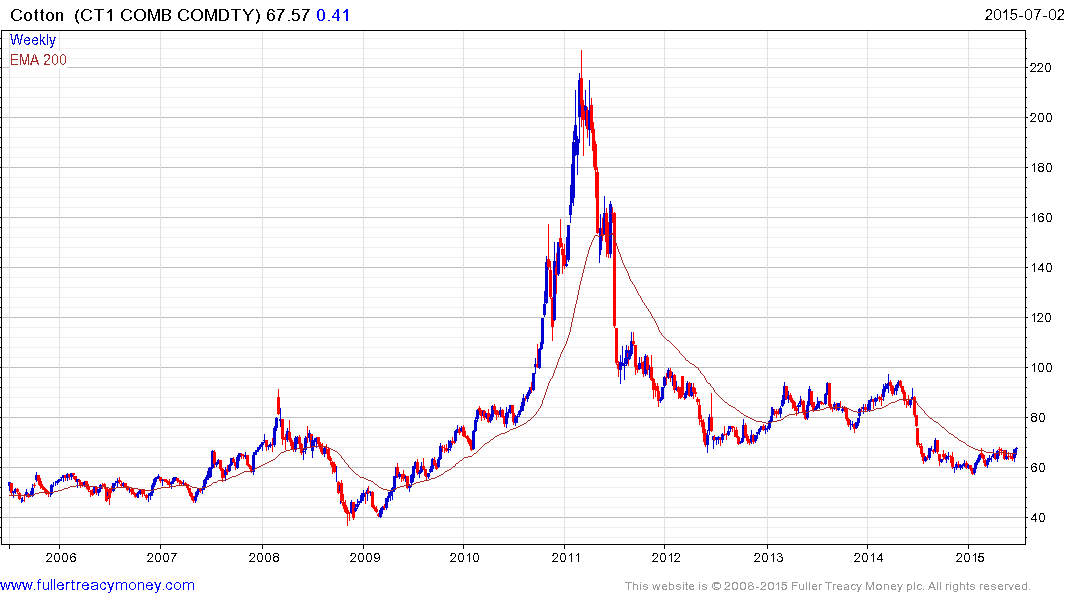 Among commodity funds focused on the sector: 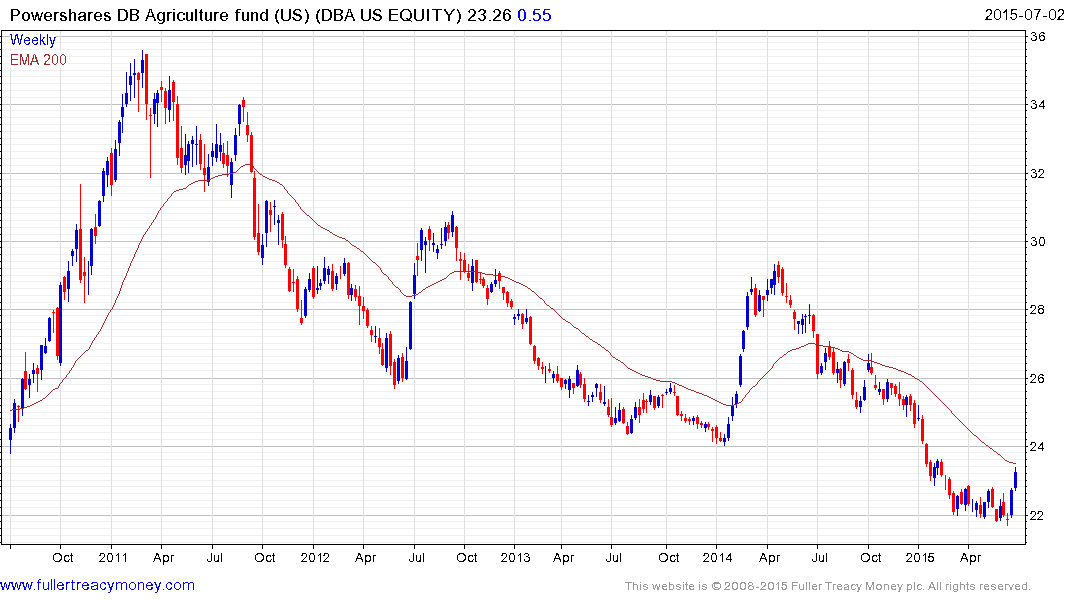 The US listed PowerShares DB Agriculture ETF lost momentum near $22 from March and rallied this week to break the more than yearlong progression of lower rally highs to test the region of the 200-day MA. A sustained move below $22.75 would be required to question potential for some additional upside. 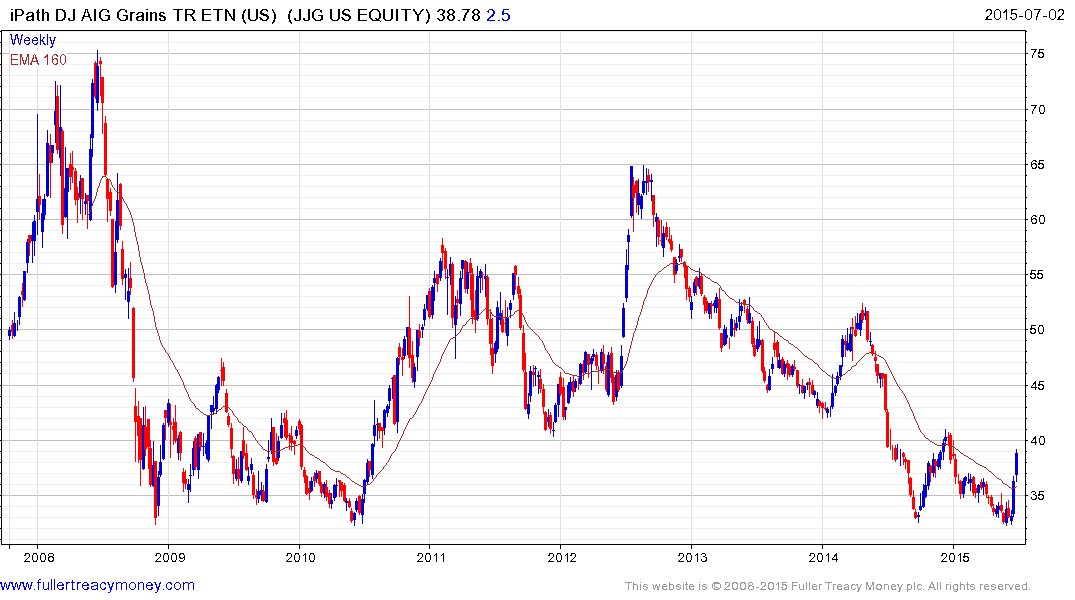 The US listed iPath DJ AIG Grains ETN found support in the region of the October low from May and rallied this week to push back above the MA. The benefit of the doubt can be given to additional upside provided it can continue to hold above the trend mean. 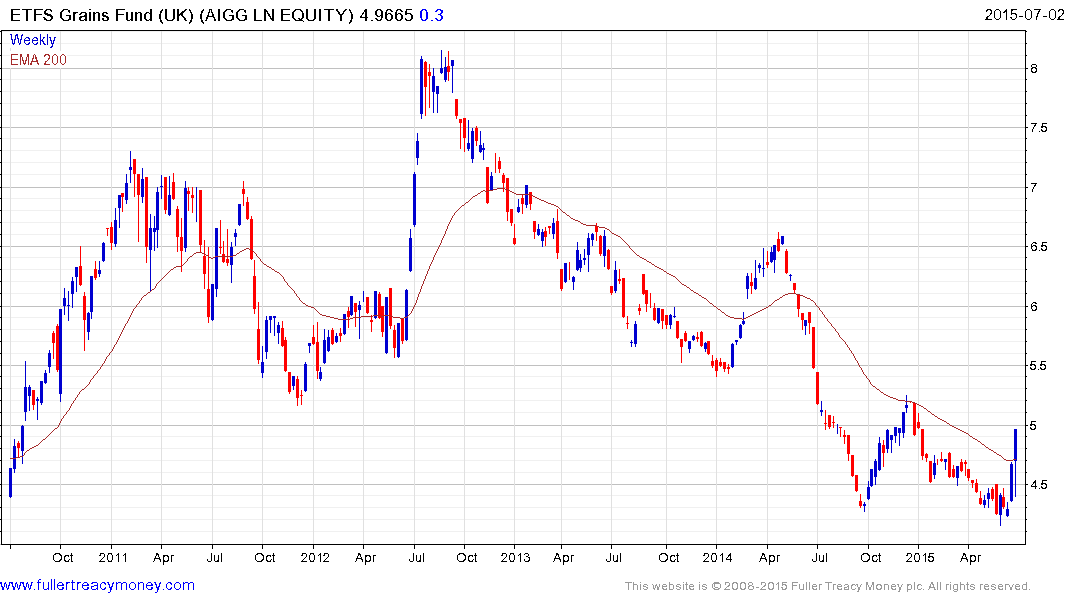 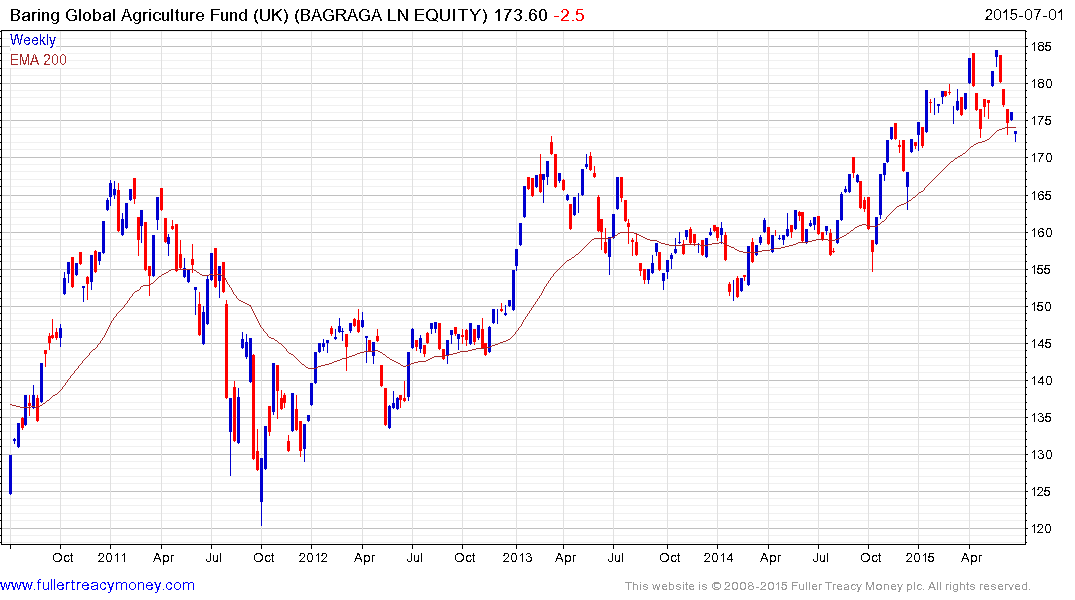 The UK listed Pound denominated Baring Global Agriculture Fund holds fertiliser, seed and food processor shares and has a 1.5% management fee. It found support this week in the region of the 200-day MA.