Unlike metals like Zinc/Lead and Nickel, there was some copper development during the downtime (e.g. Las Bambas, Constancia etc) but this is not sufficient to replace mines that have exited or reduced production and deal with even conservative forecasts of growth in consumption.

Now that the uptime has arrived (came and went and is coming again) the small to medium projects that are dependent on gold credits (or vice versa) are having a tougher time gaining traction (or even attention as gold’s prospects look so murky). That leaves the larger projects to attempt to fill the gap in the pipeline caused by so many years of the Copper price being in the dumpster.

It was surprising to recently review a listing of the top twenty western copper mines and see that two date back to the 19th century and more than half of the large producing mines date back to pre-1950s. On the next page we list the major projects that could make a difference to the copper supply situation though with the caveat that most are potentially only replacing existing production that is declining or being shuttered.

The list of upcoming mines of size by its very nature is exclusively composed of projects that are in the multi-billion dollar capex category. This means that they tend to be the hands of majors or will ultimately have to gravitate to majors to ever get off the starting blocks.

The Chinese copper stockpile has been a significant overhanging concern for the price for most of this year. It was accumulated to preserve the economy from the potential for higher prices. The broader issue is that many investors regard copper as a barometer of the global economy because it is used in every country in the world and is integral to infrastructure and technology build out. The fact that prices have been falling over the last six months has shaded perceptions of the health of the Chinese economy and questions the wisdom of building up a stockpile in the first place. 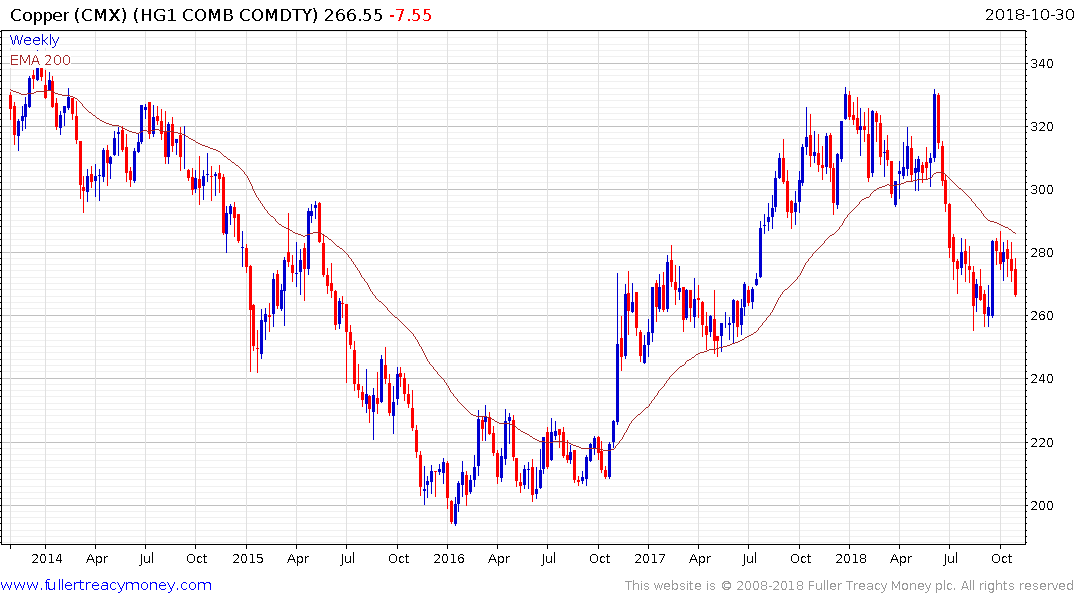 The price failed to sustain a breakout in June and quickly dropped through the lower side of its range to break the medium-term downtrend. It encountered resistance in the region of the trend mean in September and dropped back into the underlying range today. The region of the lows around $2.60 needs to hold if support building is to be given the benefit of the doubt.