Chinese copper smelters grappling with a shortage of semi-processed material are set to see an influx of supply from South America, a sign that the tightness helping supercharge the metal’s rally may be easing.

Starting next month, there’ll be a large number of ships arriving at Chinese ports from Chile and Peru, the nation’s main suppliers, as bottlenecks ease, according to IHS Markit lead shipping analyst Daejin Lee. The amount of concentrate expected to reach the Asian nation may climb almost 60% from February’s volume, he estimated.

“The narrative could be shifting from very tight supply on account of port congestion and logistics difficulties, and even the waves in Chile, to more easier supply,” said Ed Meir, an analyst with ED&F Man Capital Market. That could take a little bit of the air out of copper’s rally, he said.

Commodities are volatile and chasing prices that are already at elevated levels is seldom a useful exercise. One of the oldest adages in the commodity markets is “the cure for high prices is high prices.” The surge in copper prices has begun to encourage supply into the market. At least some further consolidation of recent gains appears likely. 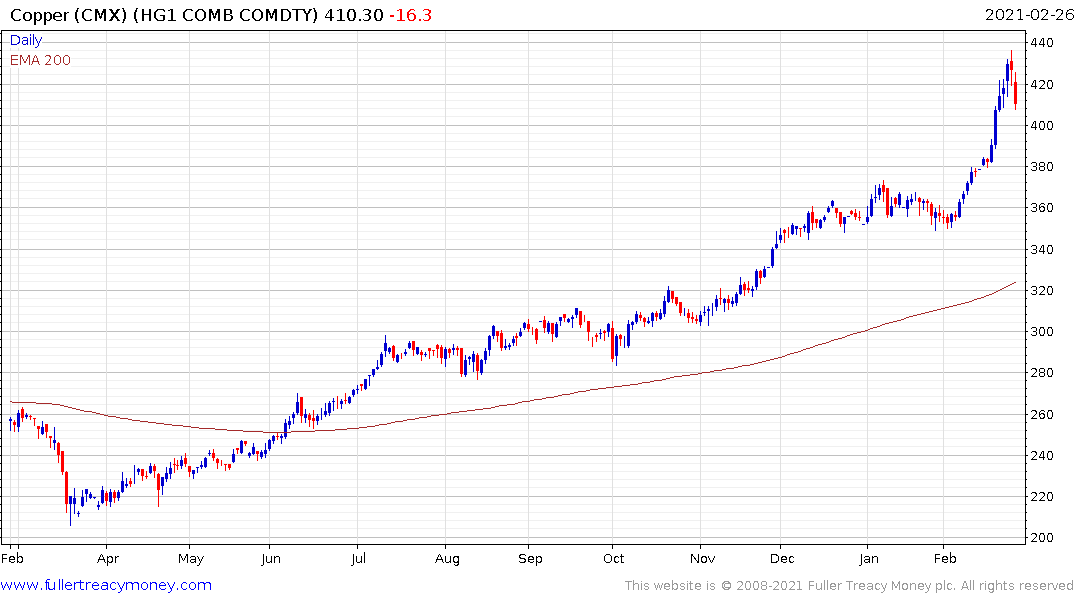 The damage done to global supply chains over the last year will take time to repair. The creation of just in time business models allowed for high optimization but little in the way of resilience for the global economy. The recent example of auto companies failing to order sufficient supplies of chips to meet a swift return of demand for vehicles is another example of how unrecognized bottlenecks continue to pop up.

It’s one thing to talk about resilience and quite another to do anything about it. Holding more inventory means higher costs. There is some appreciation for what is necessary to avoid supply disruptions are present but they will quickly be forgotten when the supply chain adjusts. That suggests the risk of outages will likely be with us for some time because investors have little tolerance for waste. That’s exacerbated by the low interest rate environment and high valuations where every cent is counted.

It is going to take at least another six months for the year over year effects of the pandemic to roll off from year over year comparisons. That’s one of the primary reasons the Fed is so reluctant to draw an inflationary conclusion. The demand growth argument for copper and other industrial resources has been boosted by short-term supply disruptions but medium-term trends of increasing demand will need to appear to supplement the secular bull market hypothesis. I believe that is a likely scenario but not before we get some consolidation of recent gains.