Global liners are stepping up de-carbonization efforts and experimenting with alternative fuels
To achieve the industry target, many global liners such as A.P. Moller Maersk (viewed an industry bellwether) are stepping up de-carbonization efforts, recently unveiled plans to fast-track its de-carbonization efforts, with a target to put the world’s first vessel powered by carbon-neutral fuel into operation in 2023, seven years ahead of its original schedule. Specifically, Maersk will install its smaller feeder vessels (capacity of around 2,000 TEUs) with dual fuel technology, power them using alternative fuels including methanol (produced from plant waste) while retaining the option to use VLSFO if necessary. Maersk is also currently experimenting with other alternative fuels including ammonia. Looking ahead, Maersk targets to operate more methanol-fueled vessels in the future and expects methanol and ammonia to emerge as more viable future fuel options.

Adoption of new technology and alternative fuels will take time to achieve commercial feasibility. There are inherent limitations towards adopting alternative fuels. Referencing remarks made by Mr. Morten Bo Christiansen (Maersk head of de-carbonization), methanol has the potential to reduce CO2 emissions by up to 15% vs conventional marine fuels while enjoying other advantages including having well-established infrastructure and manageable vessel retrofitting cost. Having said that, methanol has inherent limitations including low energy density and certain safety-related challenges. With respect to ammonia, Maersk expects ammonia to be an ideal replacement from a net zero carbon perspective, but overall technology capability remains at a nascent stage and no vessels today are equipped to utilize this fuel type. Maersk also takes a contrarian view compared to its peers and does not view Liquefied Natural Gas (LNG) as a viable alternative, given its upstream and onboard emissions.

The IMO 2020 regulations on emissions for the global shipping sector took more than a decade to agree and finally to implement. That was emblematic of an era when there was some commitment to reducing emissions but no real sense of urgency and where industry lobby groups were given priority. Today, the situation could not be more different. Shipping companies see the future of regulation and taxation and expect to be able to pass on green premiums to customers. That will put an additional cost on everything and represents an even bigger tax on global activity than an oil price spike because it is permanent in nature.

That permanence means there will be concrete plans put in place to circumvent the trajectory of regulation. That pretty much ensures alternative fuels and drive mechanisms for ships will be developed. It also represents a secular trend of higher shipping prices. The Baltic Dry Index completed its base formation today. The Index trended higher for almost a decade, along with commodities, from the early 2000s. It collapsed during the GFC and has been forming a volatile base since. The near-term supply bottlenecks in the global supply chain and the catalyst for the breakout but the biggest picture suggests the breakout will be sustained because of the secular tailwind for higher prices.

The Breakwave Dry Bulk Shipping ETF attempts to approximate the movements of the Baltic Dry Index. It’s expense ratio of 1.85% and reliance on futures may help to explain its underperformance. 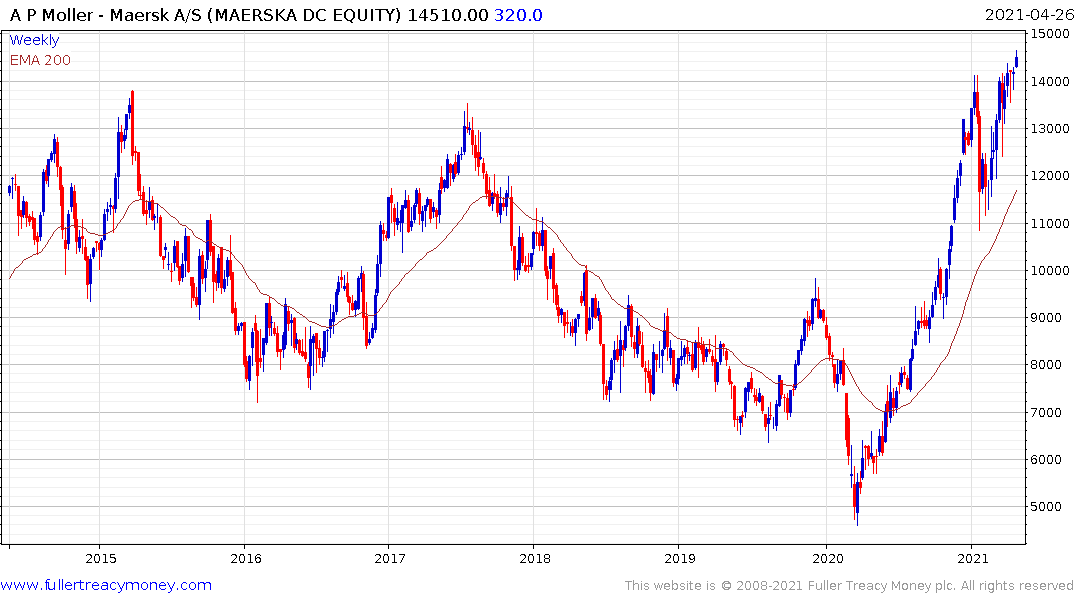 AP Moller - Maersk broke out of a 16-year range to post a new all-time high today. 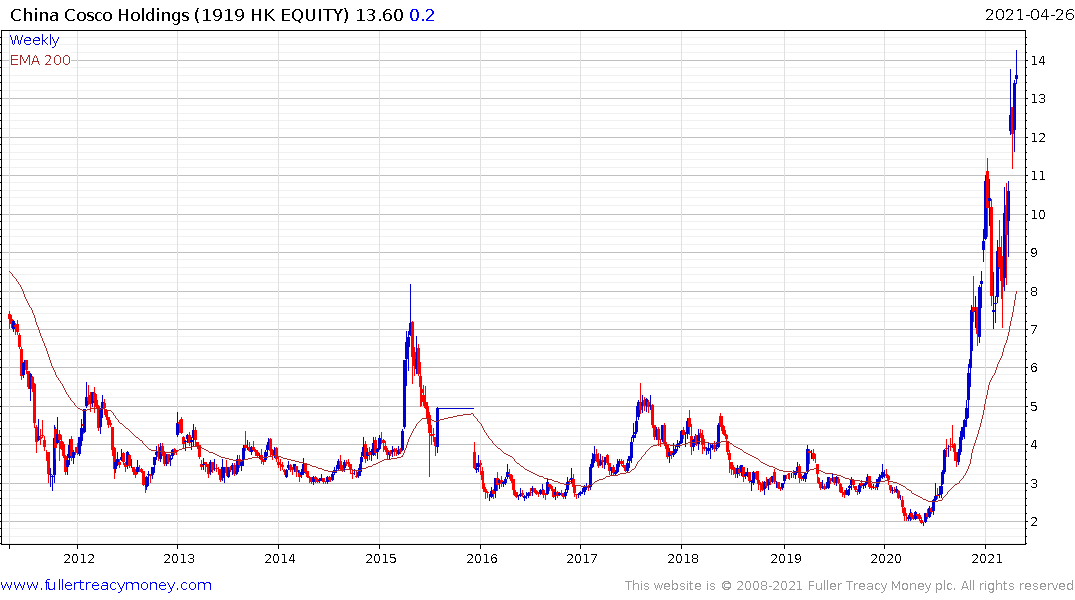 Cosco Shipping completed a first step above its base formation at the end of March and remains on a recovery trajectory. 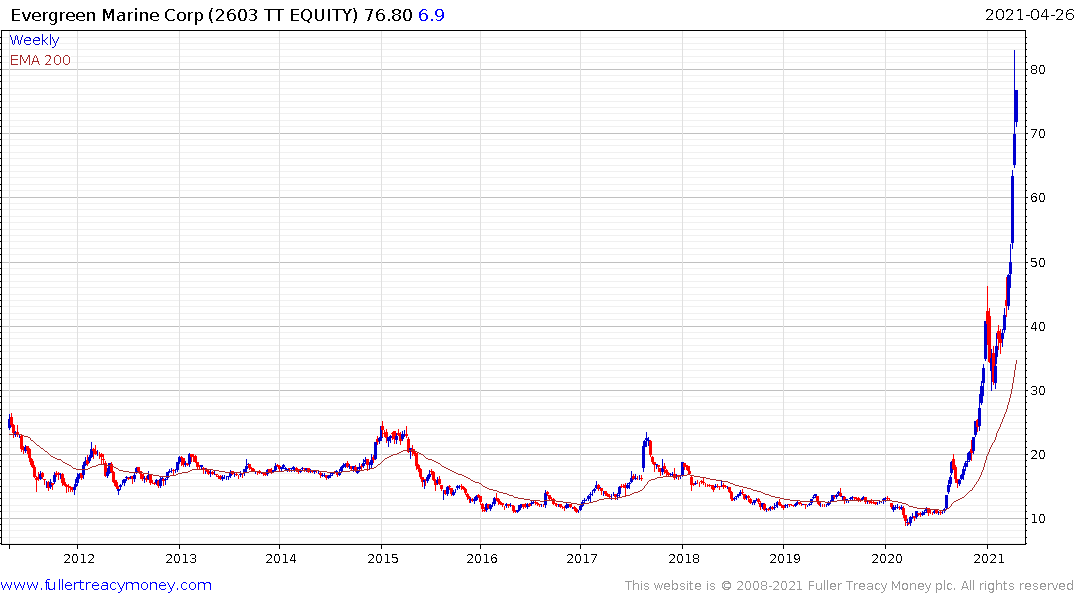 Evergreen Marine Corp has accelerated higher since the Suez debacle was cleared. It paused last week but rebounded impressively from the short-term low today. 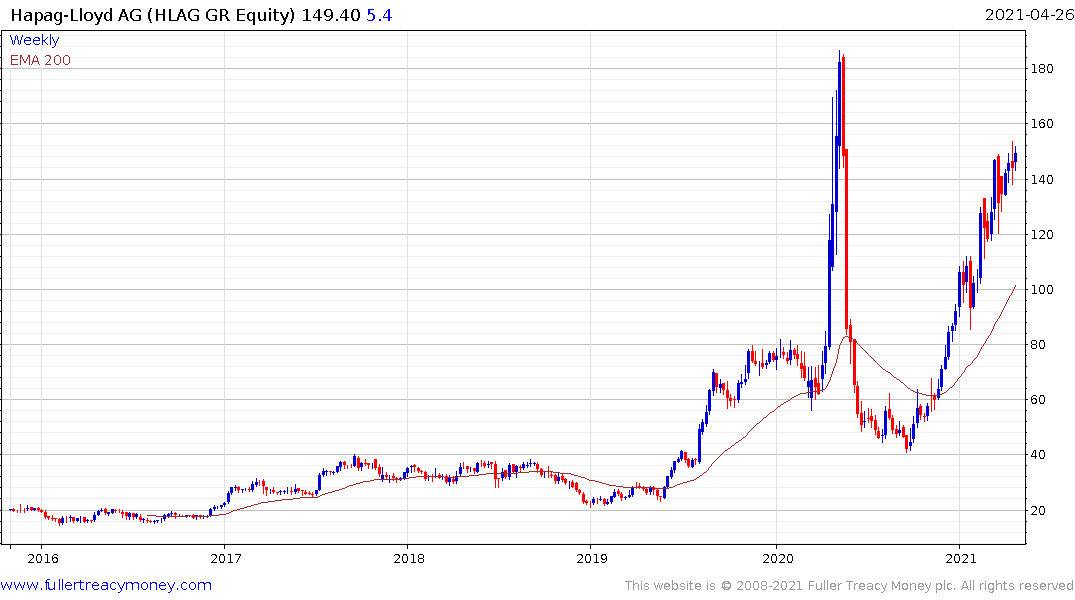 Hapag-Lloyd has rebounded to test the spike high posted during the pandemic.