June 15th – Fed Statement – It will begin buying individual corporate bonds under its Secondary Market Corporate Credit Facility. The SMCCF has capacity of $250 billion, but has only invested $5.5 billion so far.

3. The economy is moving off worst levels. One reason the market typically accelerates to the downside in a recessionary environment is a fear the economy can keep getting worse. When the government forced a shutdown to contain the risk to the healthcare system, we saw a historic rise in the U.S. Unemployment Rate (Figure 4) and a collapse in nearly every economic data series. As a result, the Citigroup Economic Surprise Index dropped to the lowest level since the GFC and within just two months has seen a record rise (Figure 5). Clearly, expectations became overly pessimistic.

4. Covid-19 vaccine appears closer. On top of Moderna’s (MDNA) announcement in May that it was seeing success in developing a vaccine, Johnson & Johnson (JNJ) stated last week it was accelerating its human clinical trials from September to July, and Regeneron (RGEN) announced it is also beginning first clinical trials of a COVID-19 antibody drug. These suggest a higher probability of a more aggressive economic reopening in 2021.

Summary – We want to add risk as the consolidation plays out. At yesterday’s low, the SPX was down 8% from the recent peak on fear of another wave of Covid-19 spread and the potential for a second economic shutdown. As stated above, the market swings have been at lightning speed and we believe many of the uncertainties that typically surround a crisis are on the path to recovery, albeit a choppy one pending broad distribution of a vaccine once approved. Our view since the April FOMC meeting has been to follow the Fed because they print the money and are actually putting it to work. After the recent ramp to SPX 3200, we continue to expect the market to spend the next few weeks in consolidation mode and would add to the economic reopening sectors on weakness. Despite the recent market consolidation, the leading areas since the trading range breakout on 05/26 have been the Banks, Industrials, Materials and Consumer Discretionary sectors and we see no reason for that to change once we have a clearer path to reopening with such historic monetary and fiscal stimulus.

There is no question that the pace of market action has picked up. We had the quickest drop from an all-time high in history and one of the swiftest rebounds in history. On top of that, the Federal Reserve has morphed from being reactive to proactive. In so doing its actions are pre-empting weak economic figures which has helped to support asset prices.

The unique characteristic of the response to the lockdown recession is the willingness to announce additional government spending measures and additional monetary stimulative measures. In March and April these pronouncements were coming on an almost daily basis and now they are arriving whenever there is even a whiff of market weakness. As I mentioned in last night’s audio this is almost the inverse of the old uptick rule. New assistance measures cannot be announced until the market declines. 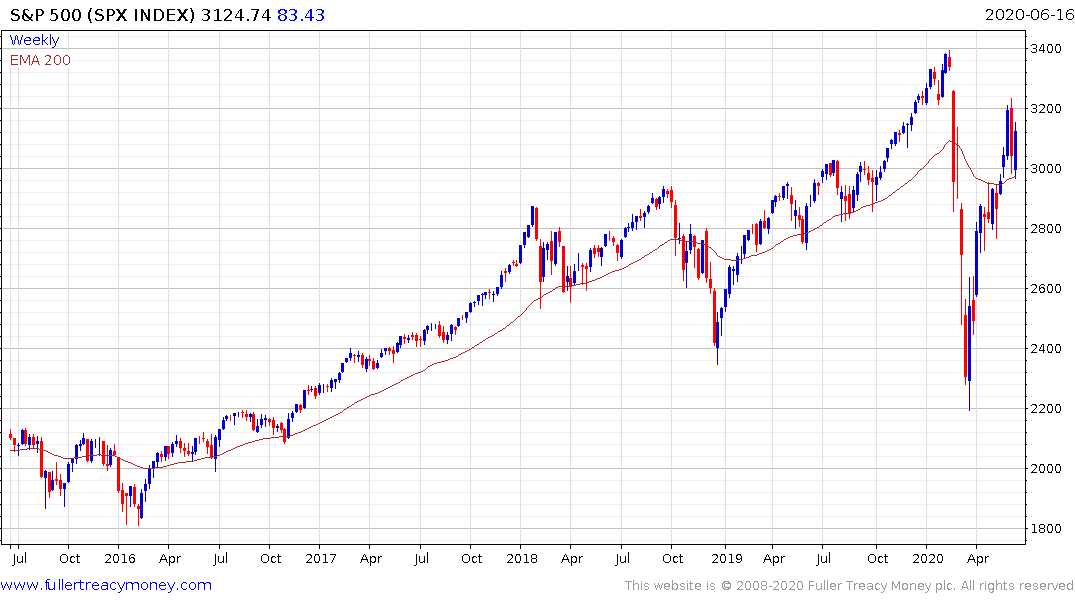 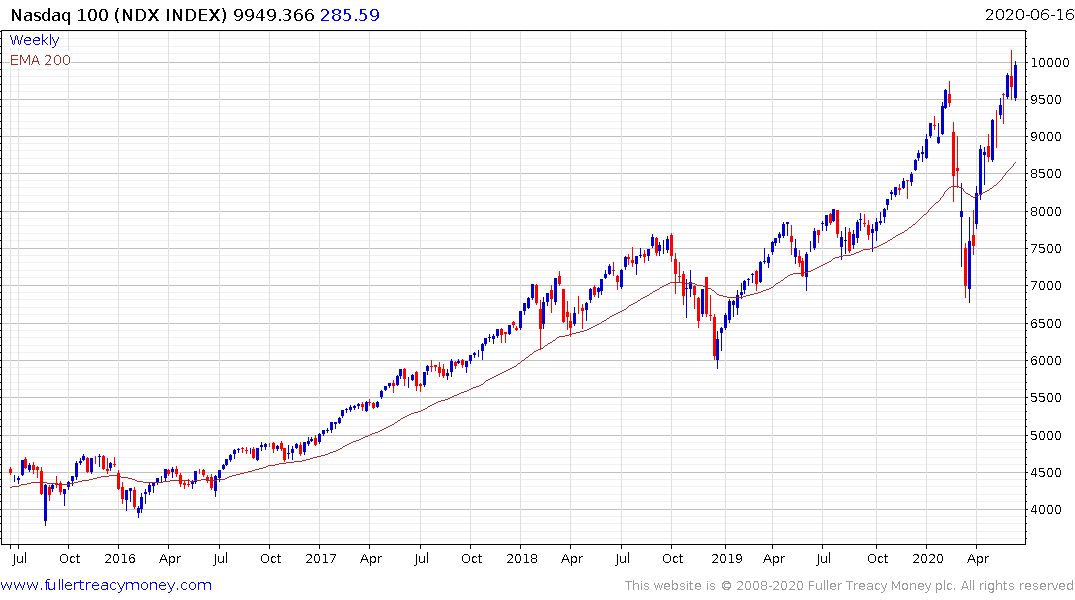 I have described the potential for the S&P500 to find support in the region of the 3000 level as the best-case scenario. Yesterday’s upward dynamic and follow through today greatly enhance scope for the recovery to take another leg higher.

I underestimated how willing the monetary and fiscal authorities are to support asset prices. I believed they would wait for a while longer before announced additional printing and spending. As long as the 3000 level holds on the S&P500 and the 9500 level holds on Nasdaq-100, we can give the benefit of the doubt to the upside.

This article from the Atlantic detailing the potential risk in the CLO market is worthy of consideration. Here is a section:

So what sort of debt do you find in a CLO? Fitch Ratings has estimated that as of April, more than 67 percent of the 1,745 borrowers in its leveraged-loan database had a B rating. That might not sound bad, but B-rated debt is lousy debt. According to the rating agencies’ definitions, a B-rated borrower’s ability to repay a loan is likely to be impaired in adverse business or economic conditions. In other words, two-thirds of those leveraged loans are likely to lose money in economic conditions like the ones we’re presently experiencing. According to Fitch, 15 percent of companies with leveraged loans are rated lower still, at CCC or below. These borrowers are on the cusp of default.

So while the banks restrict their CLO investments mostly to AAA‑rated layers, what they really own is exposure to tens of billions of dollars of high-risk debt. In those highly rated CLOs, you won’t find a single loan rated AAA, AA, or even A.

The primary challenge with accepting the risk is that it is already well known that the default rate on high yield is likely to rise. This article does help to explain the rationale for the urgency in delivering so many additional rounds of stimulus in such a short period of time. They are attempting to avoid a problem in the CLO and leveraged loans market. So far, that has been reasonably effective.