Consistency and the Autonomies by Eoin Treacy

This week has seen a great deal of volatility in stock markets and particularly among shares which have had some of the most consistent chart patterns over the last five years. On clicking through the constituents of my Autonomies folder in my Favourites a number of charts stand out as notable. 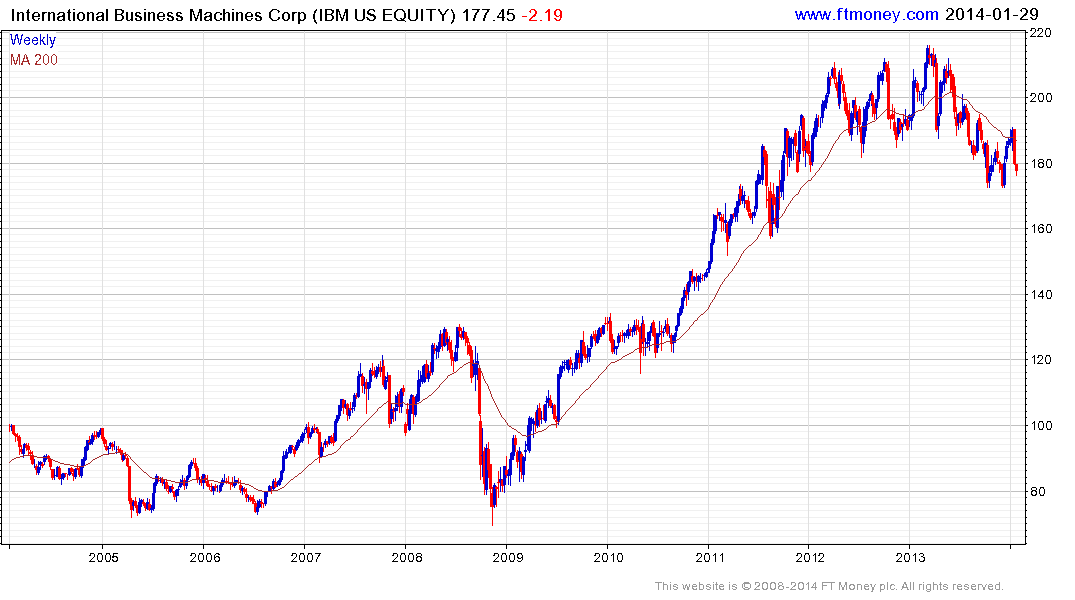 IBM (Est P/E 9.91 DY 2.14%) has been an investor favourite for its long record of share buybacks and dividend increases. The work being completed by the company in the development of artificial intelligence is inspiring and may contribute to profit growth in future. However the price action is worrying. The share had trended consistently higher between late 2008 and mid 2012 when it lost momentum. It failed to sustain the breakout to new highs in March and pulled back to test the lower side of the range before breaking down in September.

Whereas once the 200-day MA offered support on reactions, it now represents an area of resistance on rallies; confirming a pattern of medium-term supply dominance. While attractive valuations should help cushion the share, a sustained move back above the 200-day MA would be required to begin to question the medium-term bearish outlook at this stage. 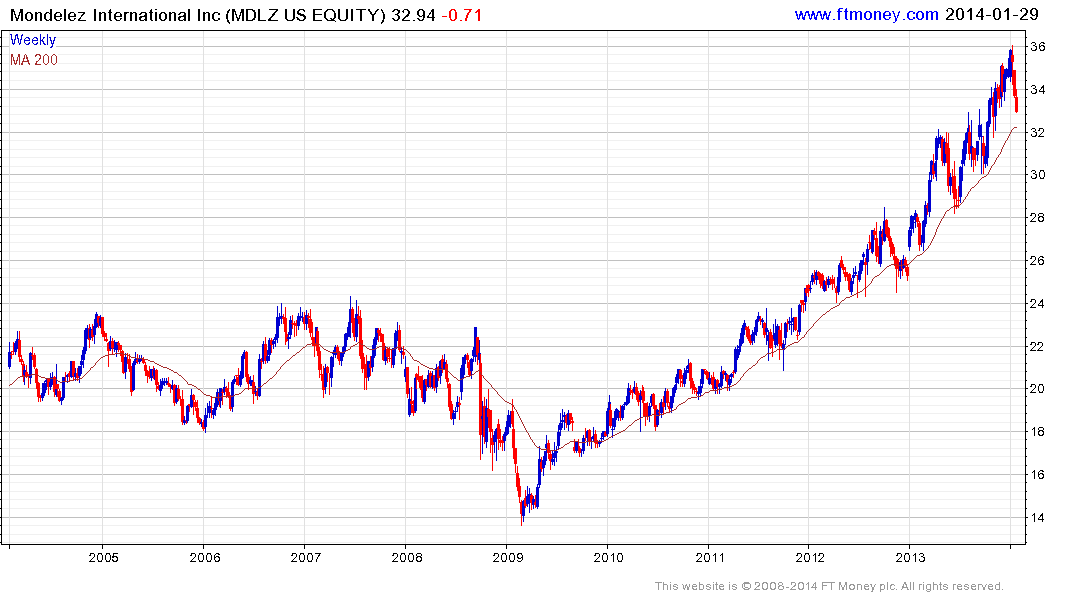 Mondelez International (Est P/E 21.15, DY 1.69%) has an enviable portfolio of global confectionary brands and has been trending higher since early 2009, finding support in the region of the 200-day MA on successive occasions. The pace of the advance has picked up over the last 18 months and the share is currently engaged in another one of its periodic reversions towards the mean.

The pick-up in the pace of the share’s advance has corresponded with a valuation expansion from a P/E of 10 in 2011 to 21.7 today. This would suggest that assuming the share finds support in the region of the 200-day, which it is currently testing, a lengthier ranging phase is a distinct possibility which would allow earnings to catch up with the valuation. 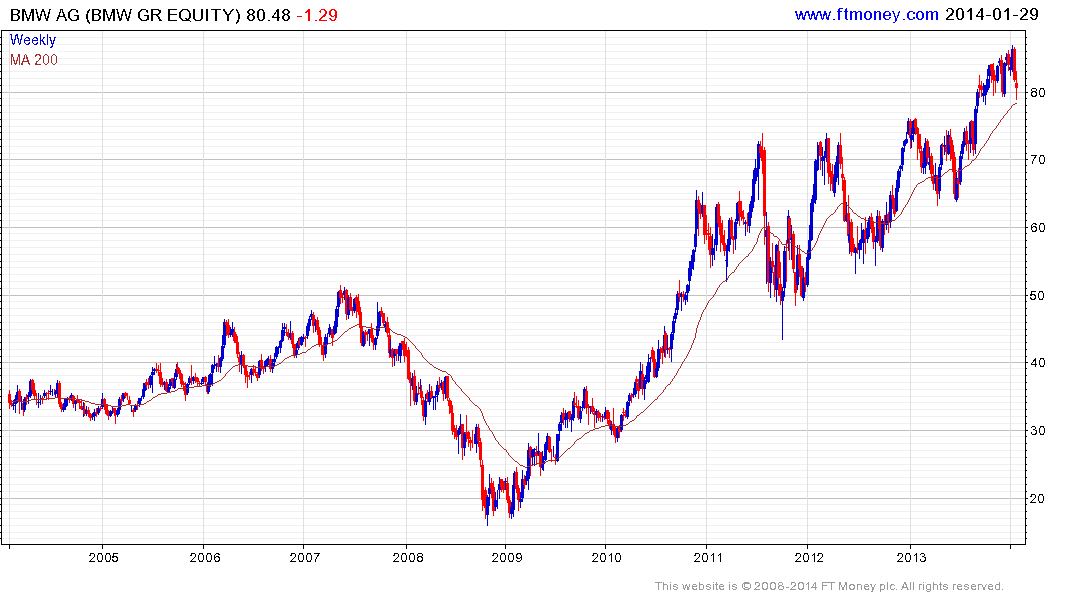 BMW (Est P/E 10.24, DY 3.24%) broke out a volatile two-year range in September and has been consolidating the move for the last few months. The share found support this week in the region of the 200-day MA and a sustained move below the €75 area would be required to question medium-term scope for additional upside. 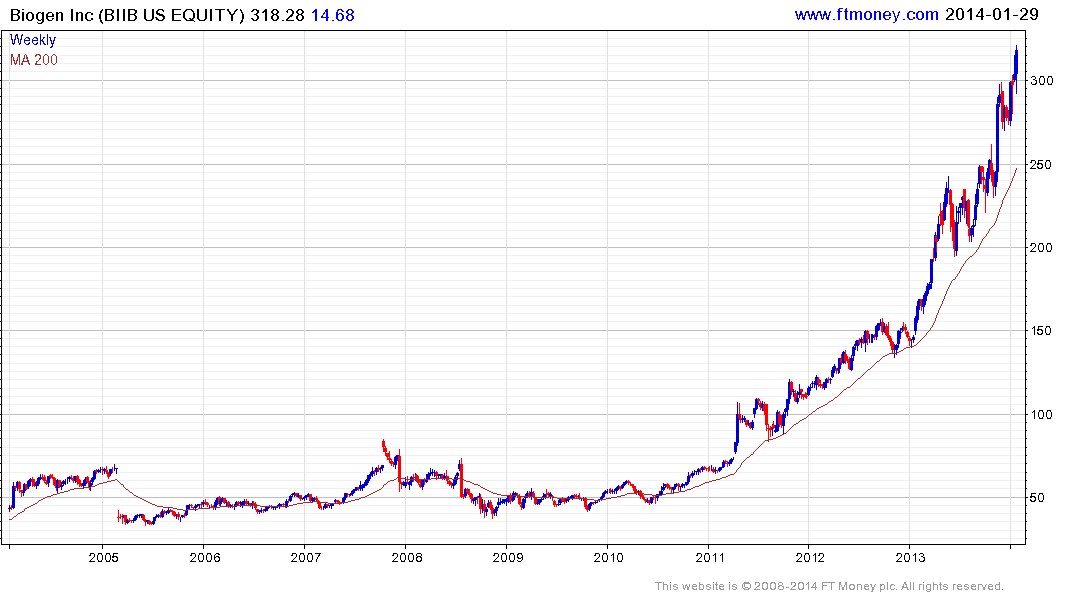 Biogen (Historic P/E 40, Est P/E 28.44, DY N/A) remains a world leader in the development of genetic medicines. The share surged higher today on positive news relating to its Multiple Sclerosis drug, extending the medium-term uptrend and the overbought condition relative to the 200-day MA. The risk of mean reversion is increasing but there is no evidence that is has started.

Taking the Autonomies as a whole the most common chart pattern is broadening following what had previously been consistent medium-term uptrends. The last time we saw this type of activity was in 2011 but this was against the background of central banks largesse whereas now policy is beginning to be normalised. A mantra from The Chart Seminar is that “broadening is seldom a reliable continuation pattern.” Because it represents supply and demand coming back into balance and potential where the relationship may eventually reverse. Therefore, it is now more important than ever to monitor the consistency of trends regardless of how enamoured with the investment story one may be.