Concentration Should Lead to Opportunities
Comment of the Day

Concentration Should Lead to Opportunities by Eoin Treacy

We are seeing extraordinary concentration of returns at the very top of the market. Specifically, the five largest companies are all tech companies and currently make up 18% of the S&P 500 market cap. This is the most extreme this metric has ever been, including the tech bubble of the late 1990s. This doesn't have to correct itself immediately but it is an unsustainable development in our view especially if net income concentration doesn't keep pace.

We think a reversal in the concentration could happen one of 2 ways: 1) proactively as investors decide to diversify into other areas of the market that have underperformed (bullish), or 2) reactively as the leaders just trade lower because the trend exhausts itself as net income concentration doesn't keep pace (bearish). Of course there is also a chance this is like the late 1990s and these leaders just continue to melt up. We would view that as bullish in the short term but a bearish development longer term.

The Fed's balance sheet and the S&P 500. Our missed call on the market multiple last year has us tuned in to liquidity dynamics that can support the market and its valuation at these levels. Given limited precedent, establishing a causal link between the Fed's balance sheet expansion and above average returns for the S&P is difficult. We found some (limited) historical evidence that S&P returns are better than average when the Fed is adding liquidity to the market, especially if the balance sheet expansion is large and/or forward earnings forecasts aren't falling, dynamics which have been at play through 4Q and YTD.

The 10 biggest companies in the world by market cap are Saudi Aramco, Apple, Microsoft, Alphabet, Amazon, Facebook, Alibaba, Berkshire Hathaway, Tencent and JPMorgan. To be part of the list a minimum market cap of $426 billion is required.

The characteristic that jumps out at me is how much this list changed in the last decade. Ahead of the financial crisis it would have been loaded with financials and energy companies. If it were not the Saudi Aramco’s IPO late last year there would be no energy companies. In the top twenty companies by market cap there would only be two banks. Meanwhile technology companies that barely registered ahead of the credit crisis are now continuing the lead the market higher.

The unifying characteristic the most successful technology companies exhibit are the capturing of value from the cloud and the adoption of some form of a subscription business model to monetise that value. Apple’s IOS and App Store ecosystem, Microsoft’s transition to 365, Alphabet’s dominance of search and associated services, Facebook’s dominance of social media, Amazon and Alibaba’s dominance of their respective online market places are all examples of these theme.

Berkshire’s long-term focus on the reliability of insurance premiums, Saudi Aramco’s dependence on oil reliance or JPMorgan’s depositor are all more prosaic examples of the subscription model. 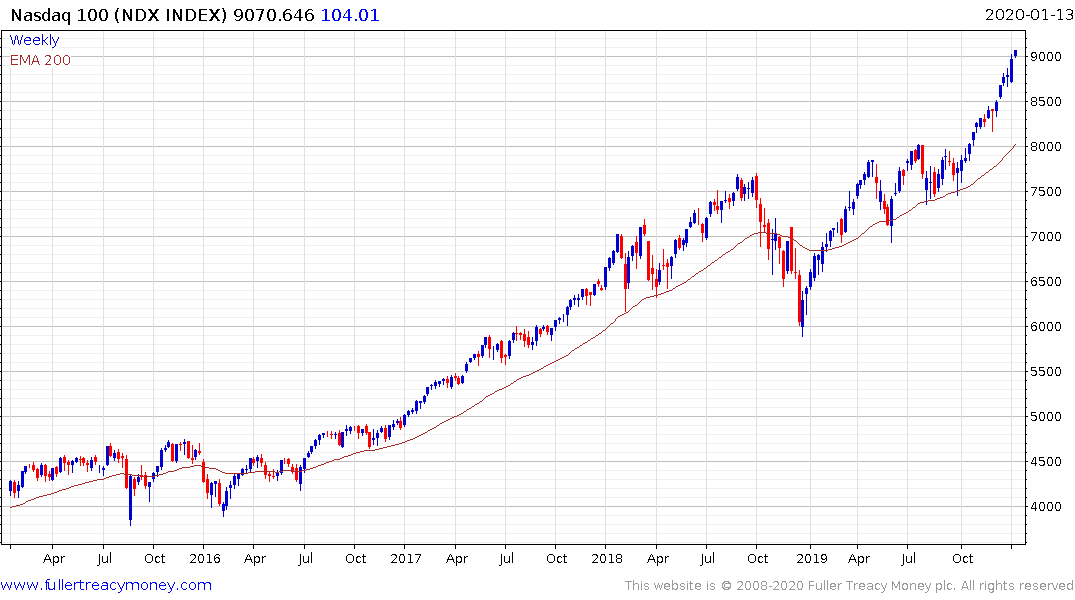 The continued low interest rate environment, massive Federal deficits and accelerating pace of Fed balance sheet expansion are contributing to the continued extension of the breakout on Wall Street. Ranges are explosions waiting to happen. The longer the range persists, the lower expectations for future potential become. When we get a powerful breakout, they often go farther for longer than anyone expects during the ranging phase. A break in the sequence of higher reaction lows would be required to signal mean reversion.