Coffee isn’t moving to ports, including the main Buenaventura shipping hub, because of nationwide protests and road blockades, Roberto Velez, CEO at the Colombian Federation of Coffee Growers says by phone from Bogota.

The Colombian situation is fueling gains for prices in New York, which have reached the highest since 2017
Protests that started last week against a tax reform bill continued even after it was withdrawn, Velez says, adding any solution would have to come from the central government
There’s also concern that Covid-19 rates are increasing in coffee areas
Coffee pickers needed for the harvest are already on the farms
NOTE: Colombia Protests Slow Coffee Shipments to Ports, Importer Says
2021 Coffee Output Seen at 14M Bags: Trade Group

The Brazilian drought has been the primary tailwind for coffee prices over the last few months. A threat to the consistency of Colombian exports represents and additional tailwind for as long as it lasts. Coffee is one more commodity experiencing supply inelasticity. The year of lockdowns unset supply/demand fundamentals and left the commodity markets more susceptible to weather or political interruptions. The result is rising prices for just about everything. 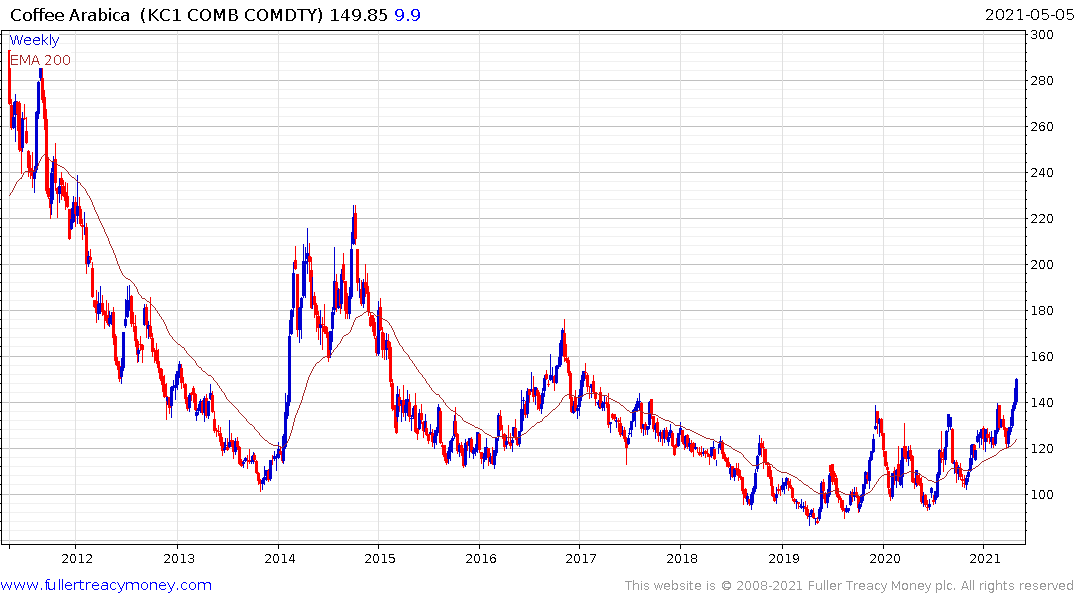 Arabica coffee broke out of a short-term range to today to retest the 150₵ level. The chart pattern has an almost five-year rounding base formation that looks increasingly like it has been completed. Bull markets in coffee can be quite acute, particularly when they coincide with the biennial downswing in productivity. This chart highlights the fact that Brazil has been able to increase production over the last decade while reducing the “off-year” impact. Nevertheless, the odd-year downdraft in production has not been completely excised from the market. 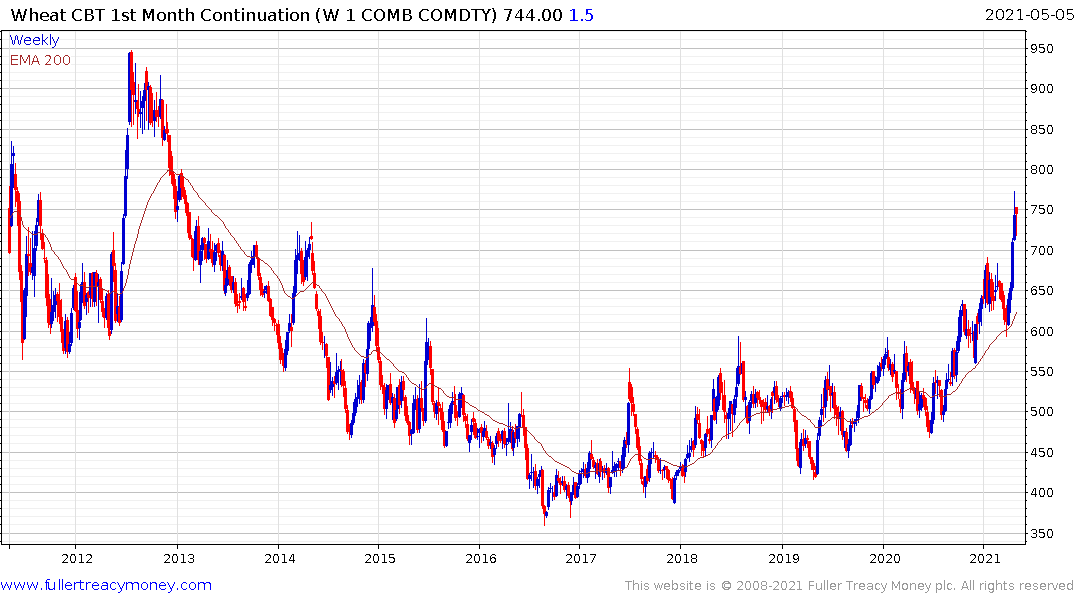 Wheat has a similar rounding medium-term base formation. It continues to extend its breakout as it plays catch up with corn and soybeans. 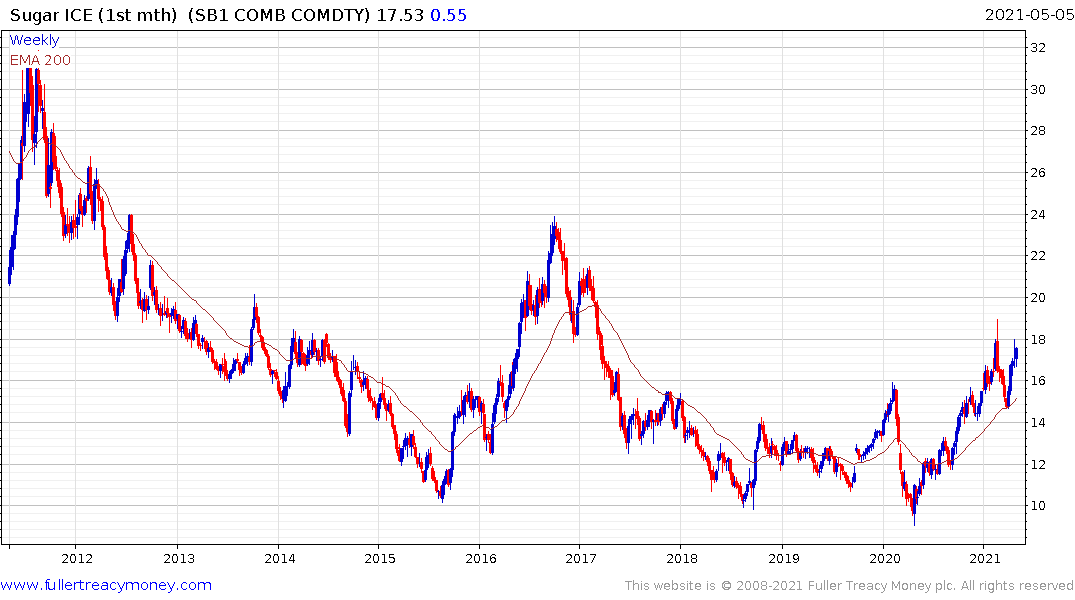 Sugar has the same rounding characteristic but more recently has been forming a first step above its base. 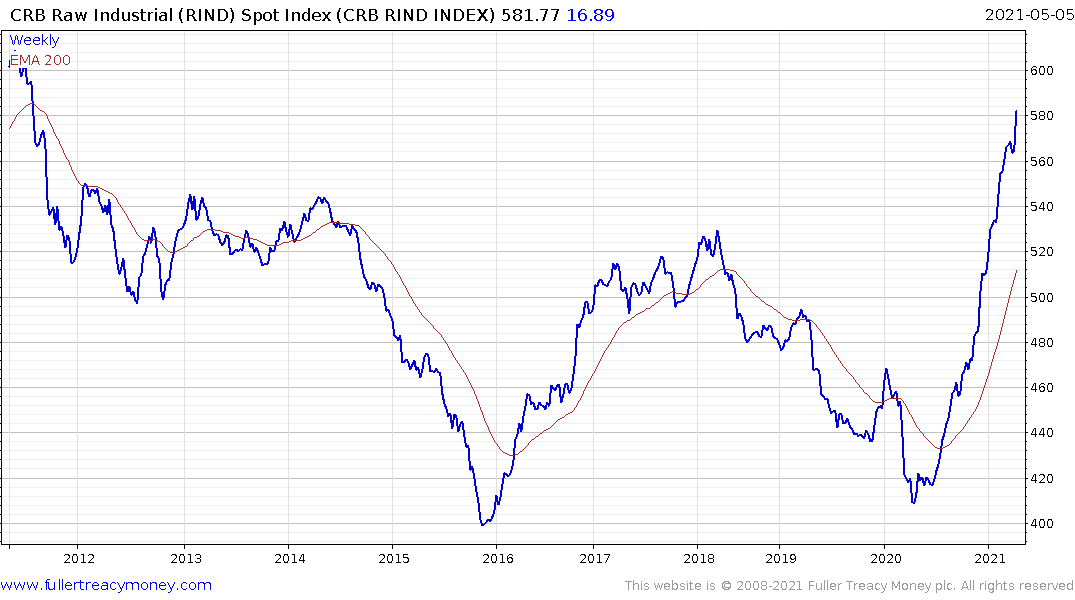 The CRB US Spot Raw Industrials Index continues to extend its breakout to new recovery highs as it marches back towards the 2011 peak.