The year-to-date gold rally brought prices to their highest level since last September, at $1,379/toz, before a more hawkish-than-expected March FOMC and lack of significant escalation since Russia’s annexation of Crimea brought prices back down to $1,330/toz. Three distinct – and in our view transient – catalysts have contributed to this rally: (1) a sharp slowdown in US economic activity, with concerns that its magnitude extends beyond the impact of very cold winter weather, (2) weak Chinese activity indicators compounded by credit concerns, and (3) escalating tension between Russia and the G7 over Ukraine.

Our base-case forecast remains for a sequential acceleration in both US and Chinese activity, and hence for gold prices to decline. While we believe that it may take several more weeks to lift the uncertainty around this acceleration, the more hawkish-than expected March FOMC is likely to weigh on gold prices in the short term. Admittedly, a rebound in US and Chinese growth this spring is a consensus view and a disappointment in either would lead us to delay our expected decline in gold prices. However, it would require a significant sustained slowdown in US growth for us to revisit our expectation for lower US gold prices over the next two years.

As has historically been the case, escalating geopolitical tensions could provide further support to gold prices and cannot be ruled out. Interestingly, while gold prices rallied sharply into last weekend’s referendum in Crimea, they sold off early this week as sanctions introduced so far fell short of expectations despite Russia’s annexation.

Ultimately, while we see clear catalysts for the recent rally in gold prices, this move has been large relative to US real rates which are a key input into our forecast and benchmarking of USD denominated gold prices. As a result, we see potential for a meaningful decline in gold prices towards the level implied by 10-year TIPS yields with confirmation of our expected acceleration in activity further pushing gold lower/rates higher. In turn, if we are wrong on this acceleration, we would expect lower US real rates to close the gap to potentially even higher gold prices.

The relationship between the strength of the US Dollar and gold is not reliable when one looks at the intraday swings of the market. However there is no denying that the weakness of the US Dollar between 2000 and 2008 acted as a tailwind for anyone holding gold as a hedge against the dilution of the currency’s value. 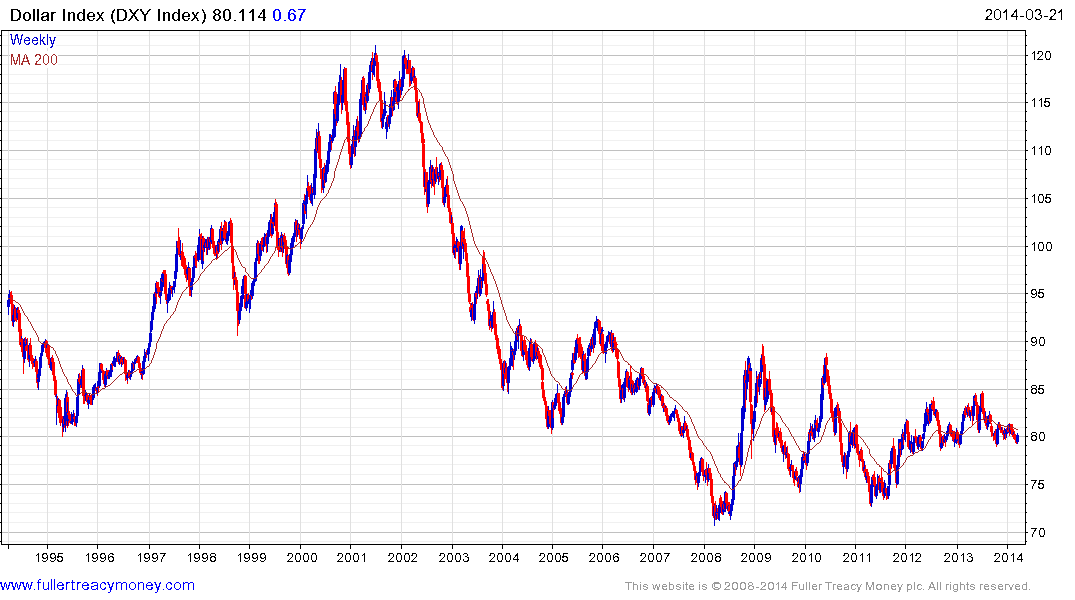 The Dollar Index has been ranging for much of the last five years, not least because other countries followed the USA into debasing their respective currencies. However, since the USA is probably going to be the first major economy to begin to raise short-term interest rates, the Dollar is likely to strengthen over time. 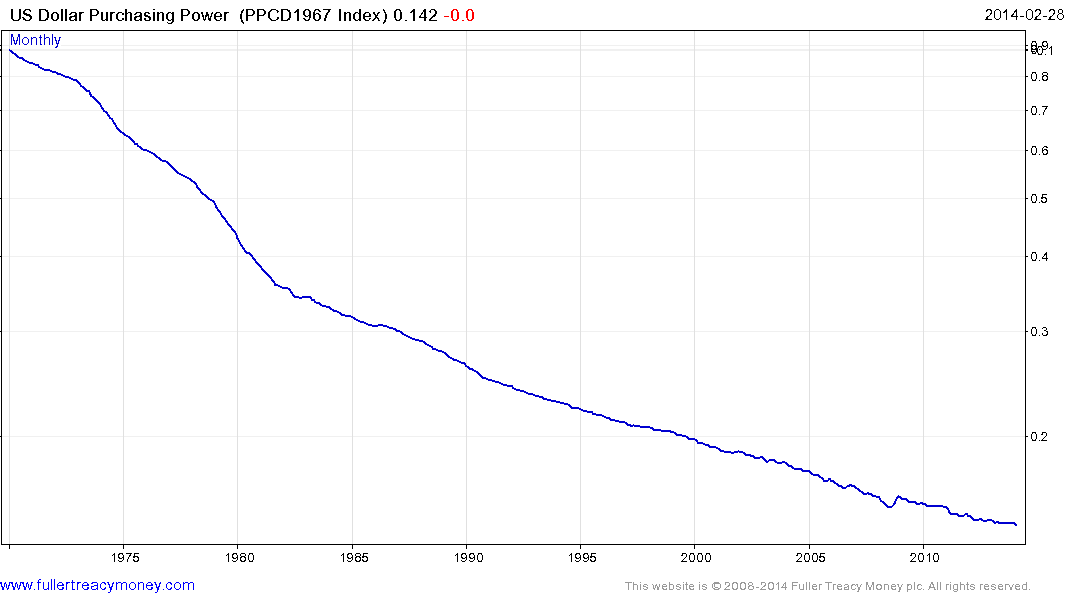 Gold bulls waste no time highlighting that the purchasing power of the US Dollar remains on a downward trajectory and gold has a solid record of holding its value over the long-term. However this argument ignores the fact that the Dollar’s purchasing power has been deteriorating for decades and that gold has experienced both bull and bear markets during that time.

It is perhaps more accurate to say that as a monetary metal with no yield, gold does best in a lower interest rate environment and offered particular allure when real yields, represented by TIPS, were negative. 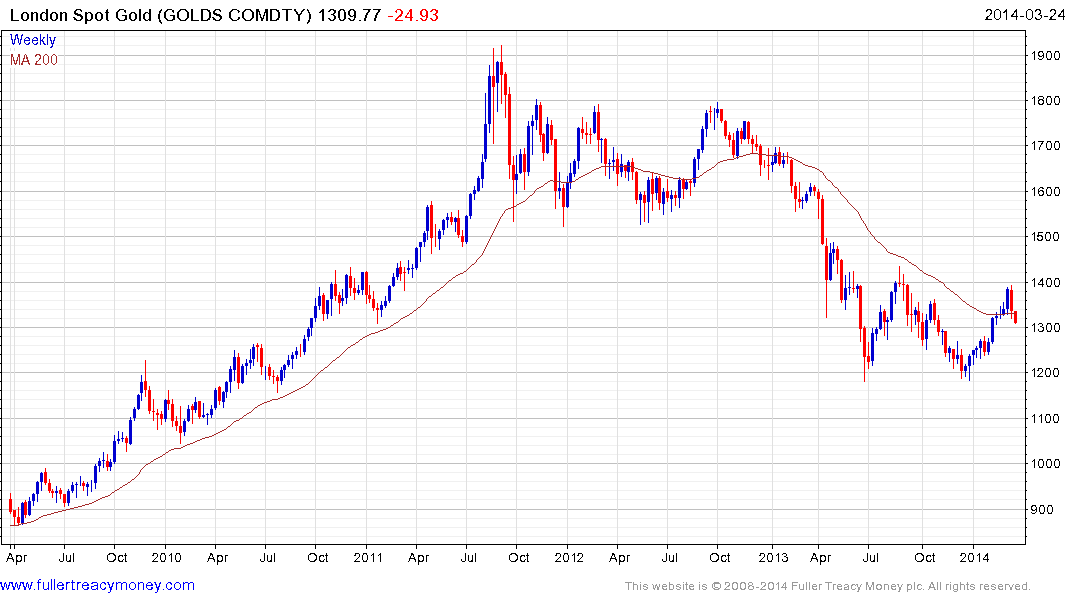 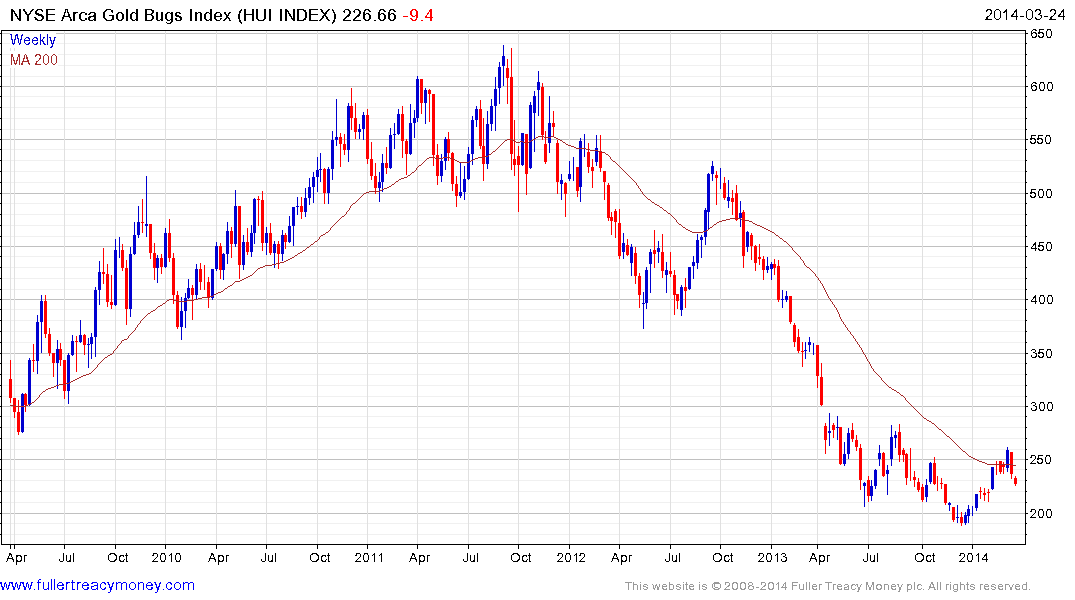 Gold mining shares have been under a cloud for at least three years but recently returned to test their 2000 low relative to gold prices. Even if one were to assume gold prices range between $1180 and $1400, this should be reasonably positive for gold miners that can demonstrate control over their cost base.