Cocoa shortages are poised to extend into the next decade as West African growers struggle with underachieving farms or switch to more lucrative crops, such as rubber.

As worldwide demand increases -- the average Chinese consumer eats only a little more than two candy bars’ worth of chocolate a year -- producers are considering ways to boost grower income and coax higher yields from cocoa farms in Ivory Coast and Ghana. Despite two years of shortages, prices haven’t risen enough to persuade many farmers to stick with cocoa while other crops pay more.

“Cocoa farmers are becoming more aware of the bad deal they’re getting on the cocoa value chain,” said Edward George, head of soft commodities research at Lome, Togo-based lender Ecobank Group. “It takes something quite dramatic to get a farmer who has been cultivating cocoa his entire life to tear up his cocoa plantation and switch to rubber. But you can see a trend is under way.”

Worldwide cocoa demand will outpace production again in the next season that starts Oct. 1, according to a Bloomberg survey of five analysts and traders. The deficit is expected to grow ninefold to 1 million metric tons by 2020, which would equal about one-quarter of global output if growers maintain the current rate of production, said Zurich-based Barry Callebaut AG, citing an industrywide forecast. How to satisfy global demand will be a topic discussed at the World Cocoa Conference, which starts June 9 in Amsterdam.

Sustainable Farming
​Part of the problem is unrealized potential, said Damien Thouvenel, a cocoa trader for Sucres et Denrees SA, or Sucden, in Paris. Growers in Ivory Coast, which, combined with neighboring Ghana, is the source of 55 percent of the world’s cocoa, harvest an average of 400 kilograms (882 pounds) of beans per hectare (2.5 acres) while a farm that’s well-managed with fertilizers and pesticides can yield up to 1.5 tons per hectare, Thouvenel said.

To address this, 12 of the world’s largest chocolate and cocoa companies, including Barry Callebaut, Ferrero SPA, Hershey Co., Mondelez International Inc., Mars Inc., Cargill Inc. and Nestle SA, signed an agreement with the Ivorian government in Abidjan on May 20 to “accelerate actions to make cocoa farming in the country sustainable,” according to a statement on the website of the World Cocoa Foundation, which will coordinate strategy.

The life cycle of a cocoa tree means that new supply is difficult to bring on line quickly. Additional measures such as modern farming methods including fertilisers and pesticides are required to boost yields over the next few years. Both London and New York traded Cocoa are in backwardation and both exhibit consistent medium-term uptrends suggesting demand dominance.

In absolute terms prices are still well below the highs reacted in 2010 which means they could rise further before demand destruction becomes a factor. A break in the progression of higher reaction lows currently near £1790 and $2850 respectively would be required to question medium-term uptrend consistency. 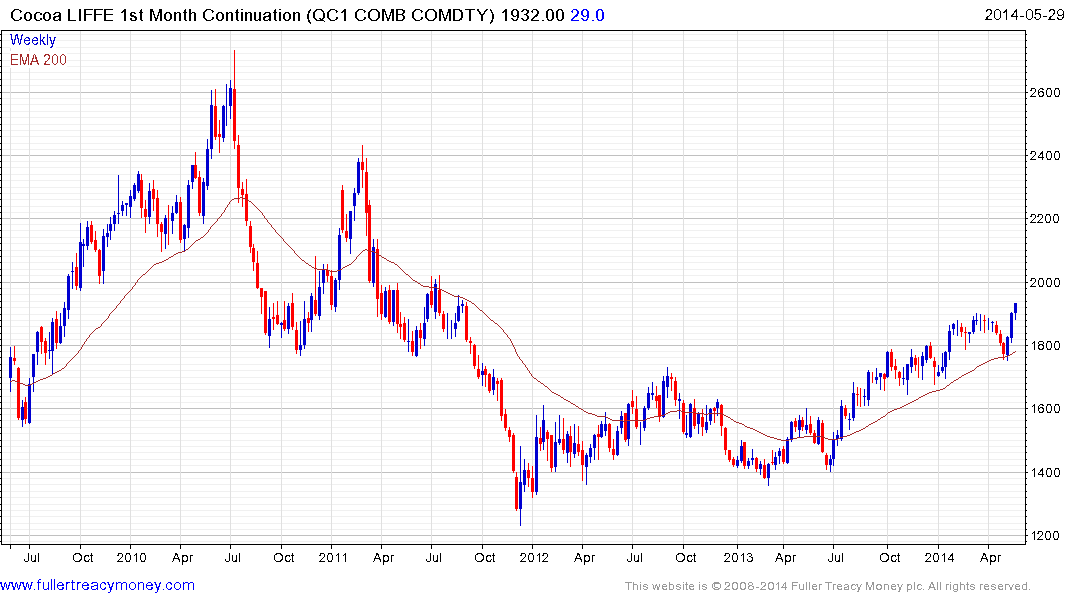 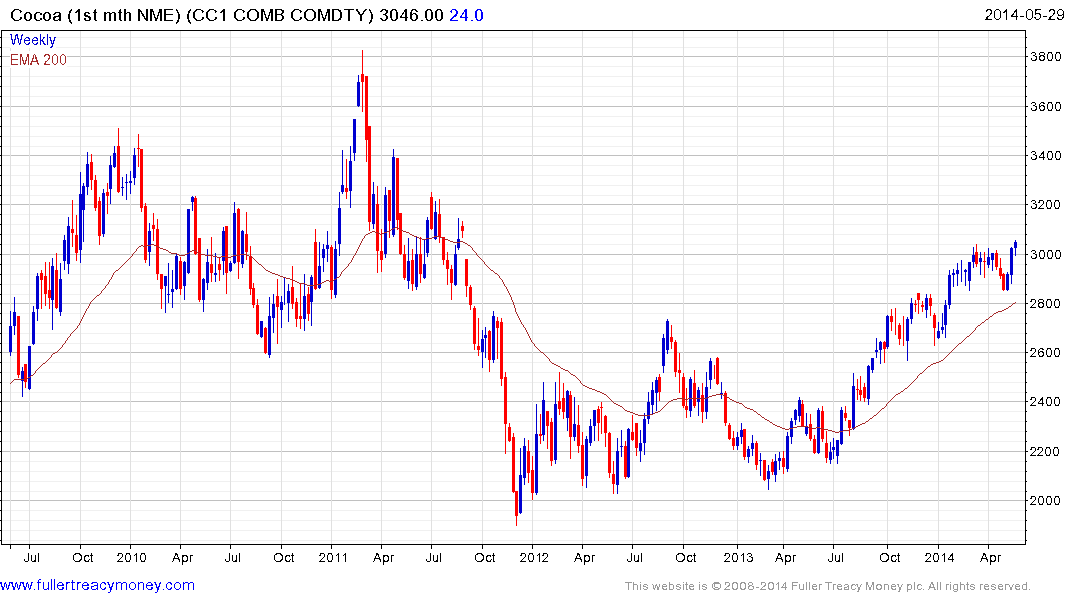 This article dated May 20th, includes the full list of companies involved in the CocoaAction group investing in raising Cote D’Ivoire and Ghana’s agricultural productivity. What is perhaps most notable is how few of the companies are publicly traded. Temasek’s recent offer for the remaining portion of Olam International will decrease that number further.  This helps to illustrate just how tightly controlled the global confectionary business is, while the performance and commonality of listed companies testifies to its profitability. This is well known by the investment community which helps to explain why the sector is trading at a premium to the wider market. 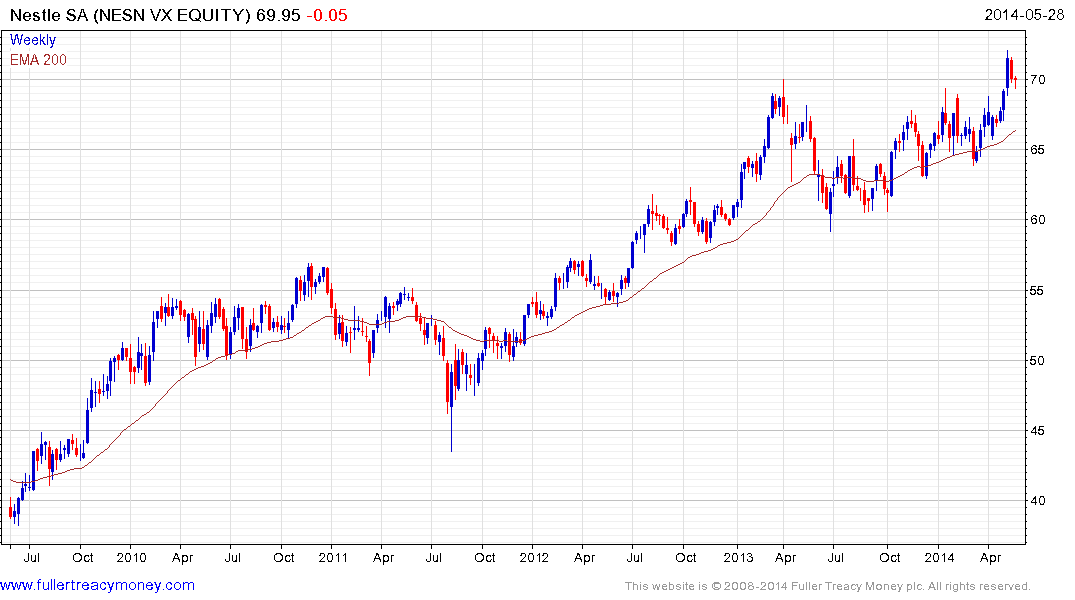 Nestle (Est P/E 20.07, DY 3.07%) is an S&P Europe 350 Dividend Aristocrat and one of our global Autonomies. The share broke out to new all-time highs two weeks ago and has pulled back to test the upper side of the underlying range. A sustained move below CHF67 would be required to question medium-term potential for additional higher to lateral ranging. 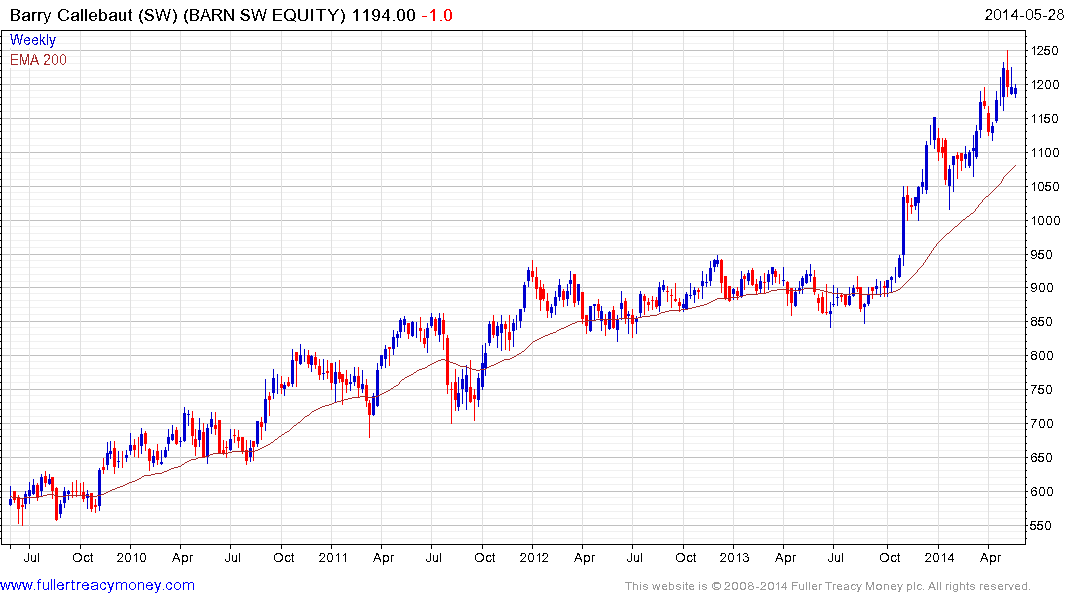 Elsewhere in Switzerland, the pace of Barry Callebaut’s (Est P/E 24.27, DY 1.21%) uptrend picked up from late last year and it continues to hold a progression of higher reaction lows. 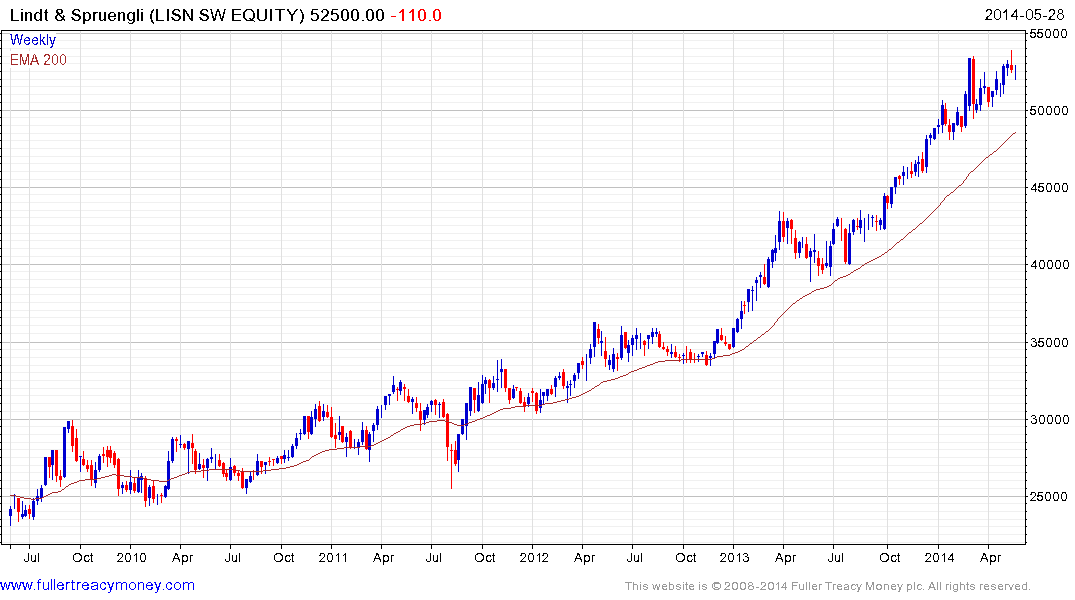 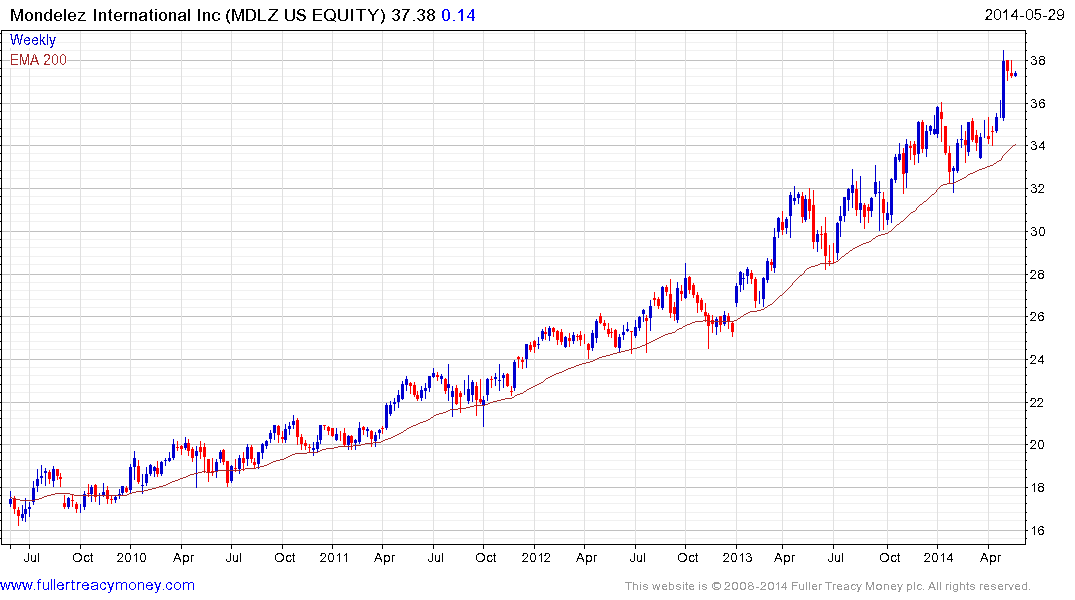 US listed Mondelez International (Est P/E 21.69, DY 1.5%) is also an Autonomy and looks likely to consolidate this month’s powerful advance. 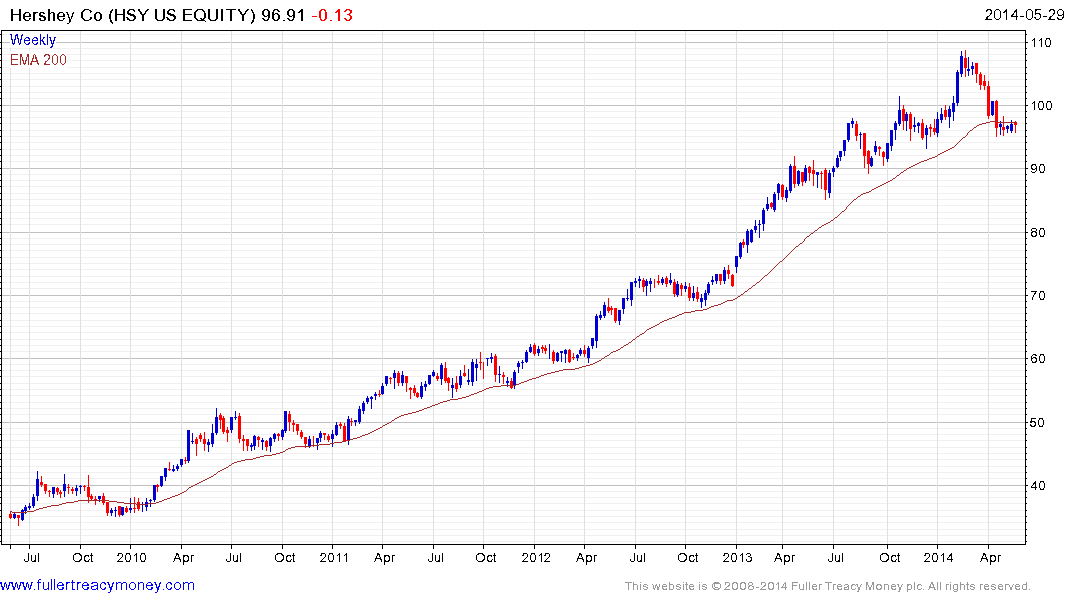 Hershey (Est P/E 23.53, DY 2.01%) generates more than 83% of its revenue from the USA. The share has pulled back to test the region of the 200-day MA but a sustained move below $95 would be required to question medium-term potential for additional higher to lateral ranging. 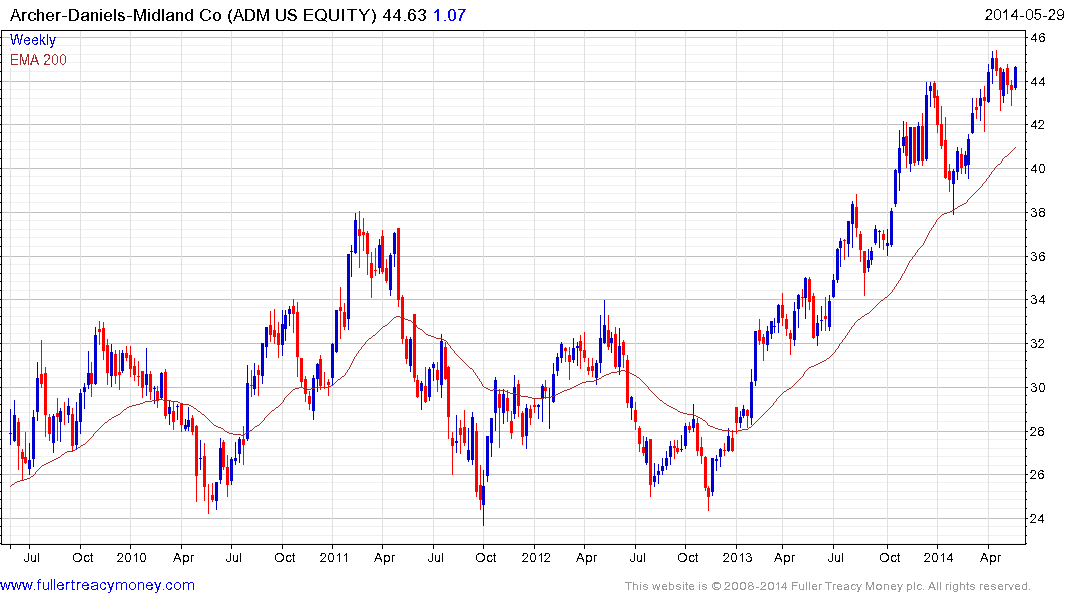 ADM (Est P/E 14.71, DY 2.15%) is not generally considered a chocolate company considering its position as a processor of grains. However the share is trading at a discount to the sector above and continues to trend consistently higher.