The cloud is a once-in-a-century general-purpose technology that, as we see it, will completely transform our economy and society. We are at about the same point in adoption that electricity was in 1920 and steam engines were in 1820, and both of them led to the “Roaring 20s” of their centuries as we expect the cloud will do for ours. We envision a ubiquitous cloud with intelligent edge devices collecting data and transmitting data back to the centralized cloud in a meshed fabric, allowing edge devices to act on the data. Microsoft calls this the “intelligent edge,” and we call it “fog computing.” We view this global mesh compute/network fabric as a core general-purpose technology that is the cradle of much of incremental innovation going forward. We outlined six new primary technologies (out of a few dozen) that require cloud computing to progress:

1) Artificial intelligence. We use this term to include machine learning and deep learning and we believe this is the killer cloud application.
2) Blockchain.  Protects data, automates trust, and with AI enables digital wallets, payments, and crypto currencies, among other innovations.
3) Robotics. Revolutionizes manufacturing and automates supply chains for step-function increases in productivity.
4) Autonomous vehicles.  A once-in-a-century transportation transition allowing transportation as a service or autonomous pooled taxi networks. This will extend to every mode of transportation (planes, trains, and logistics).
5) Genomics. Includes CRISPR, and other healthcare technologies.  And hopefully slash costs and improve quality on a $4 trillion industry.
6) IoT.  Enables every electrical device to be become a sensor with access to unlimited compute/data, will rely heavily on next-generation wireless/satellite networks.

I received a service call from Bloomberg this morning while I was reading this report and it occurred to me that I worked for a cloud company all those years ago and didn’t even know it. Back in the early 2000s Bloomberg insisted on dedicated lines before they would install a terminal. The system required the bandwidth to pump real-time prices and calculations through to the end user. Those calculators sat on the company’s servers rather than the desktop which is effectively what cloud computing is.

Today we receive all manner of services via our smartphones, where the calculation and storage are accessed remotely via internet. The two ways to play this theme are through the physical networks required to run applications and the software companies developing services which can be accessed via the cloud.

I have a lot of sympathy with the view that the rollout of 5G will have a transformative effect on the range of services that can be delivered over the web. One of the limitations currently taxing developers is speed and bandwidth. 5G represents 10 times the bandwidth of current 4G. That puts big data, machine learning and artificial intelligence at the finger tips of billions of people.

That’s a big promise but there are challenges. Many communities are rebelling at the idea of having high frequency transmitters located in high concentrations in such close proximity to consumers. That is slowing the rollout of the network even while the first 5G phones are now hitting the market. The other issue this is a well understood market opportunity with a great deal of emerging competition. The large incumbents like Microsoft, Google, Apple and Facebook continue to dominate the field. 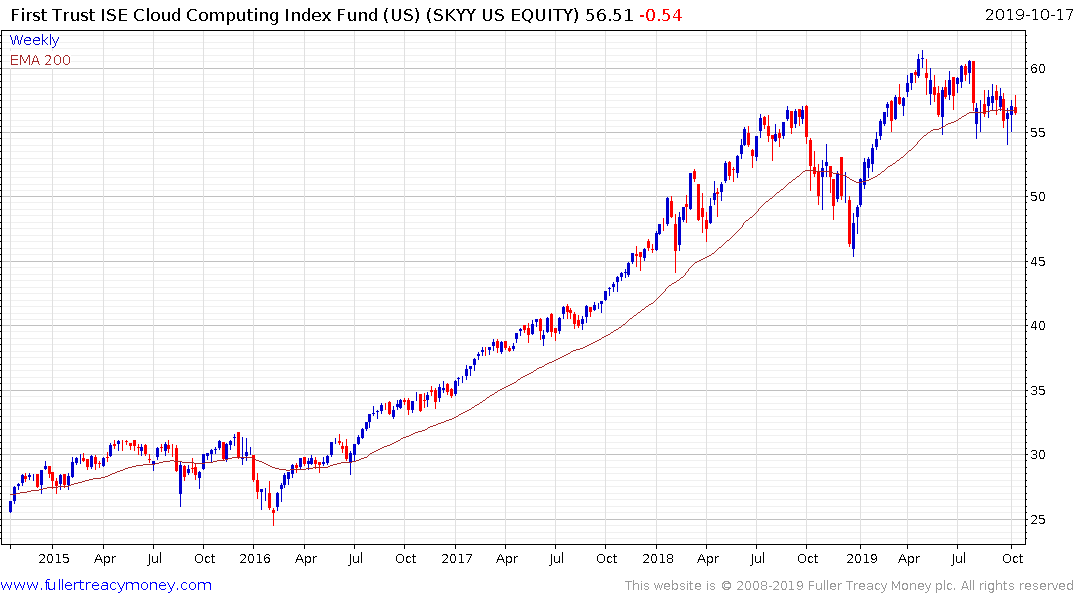 The First Trust Cloud Computing ETF lost uptrend consistency in late 2018 before rebounding impressively to hit a new high. It has held a sequence of lower rally highs since May and pulled back sharply this week from the region of the trend mean. One of the points we make at The Chart Seminar is powerful trends very often lose consistency at the penultimate peak. This occurs because some people’s stops get triggered so they become risk averse but others view it as a buying opportunity and have enough impetus to push on to a new high. However, without the support of the first cohort the highs are more difficult to sustain. The ETF needs to rebound above the trend to avoid top formation completion characteristics. 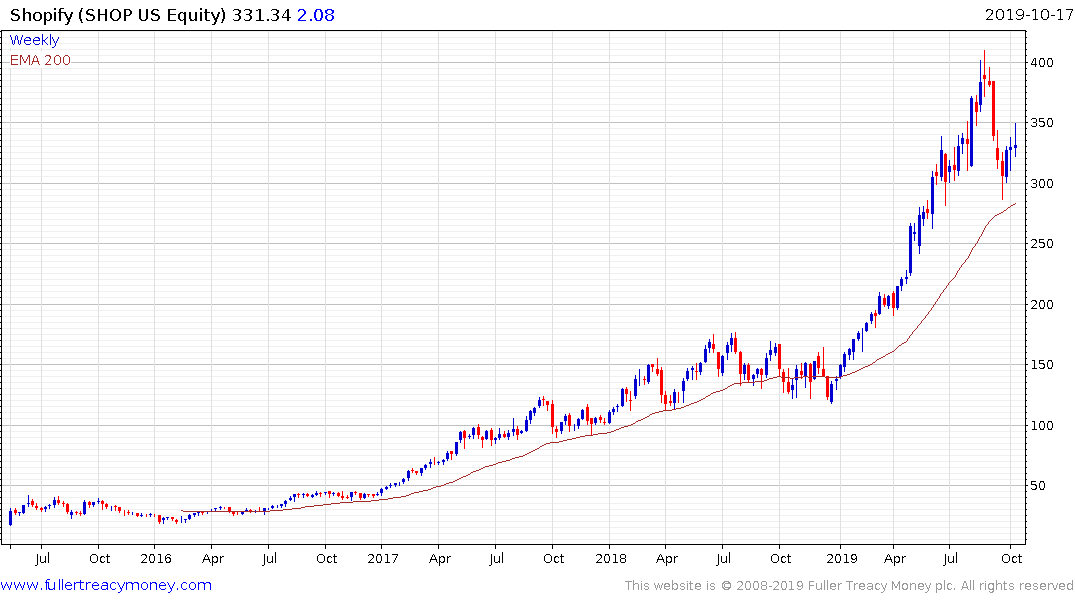 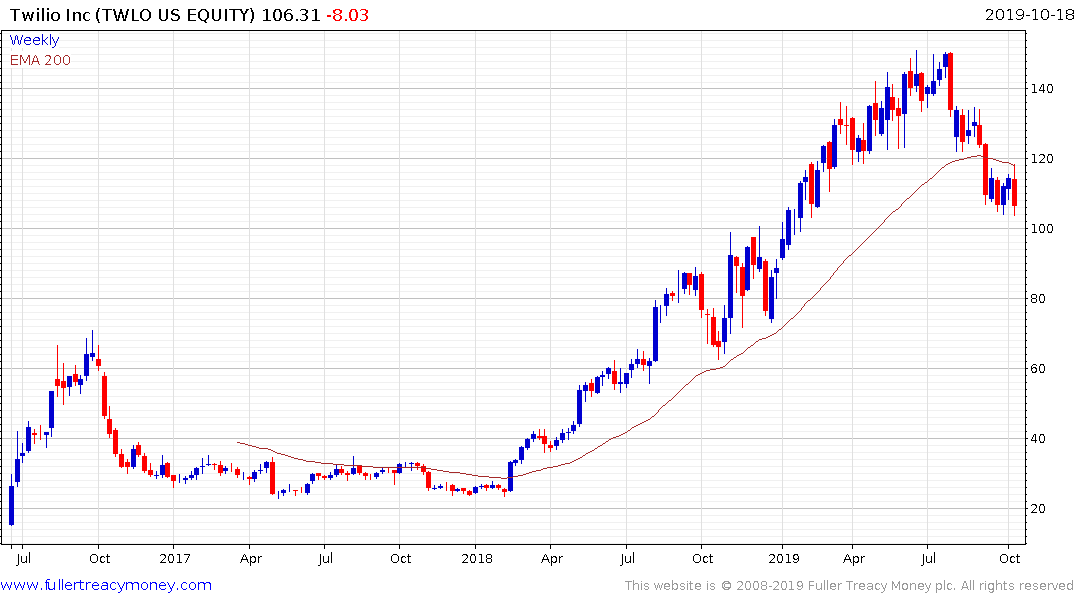 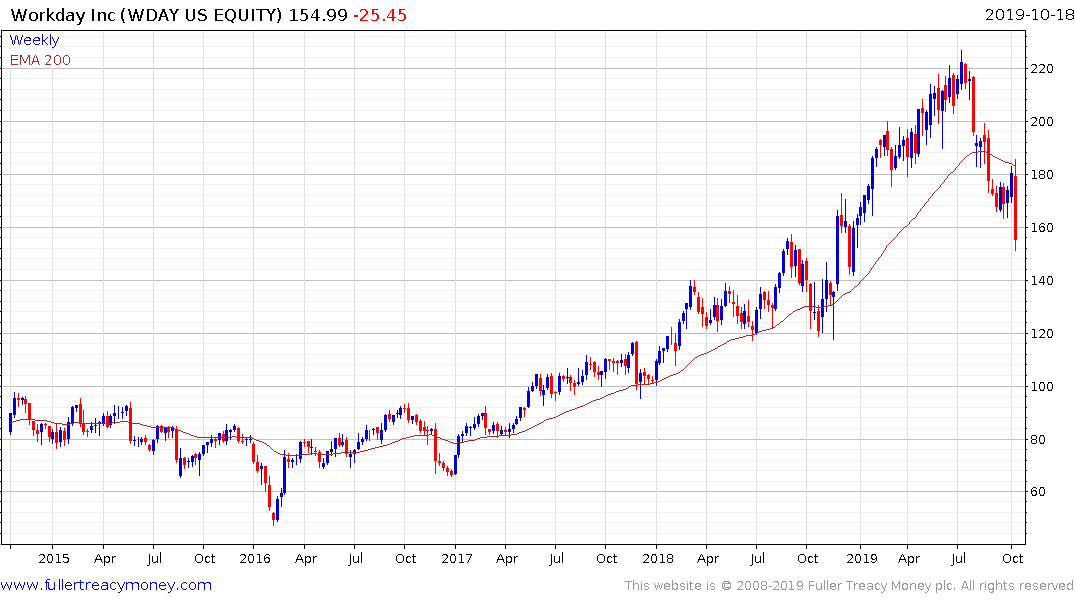 Workday (Est P/E 90) is now also trending downwards  Slack has done nothing but decline since immediately after its IPO. 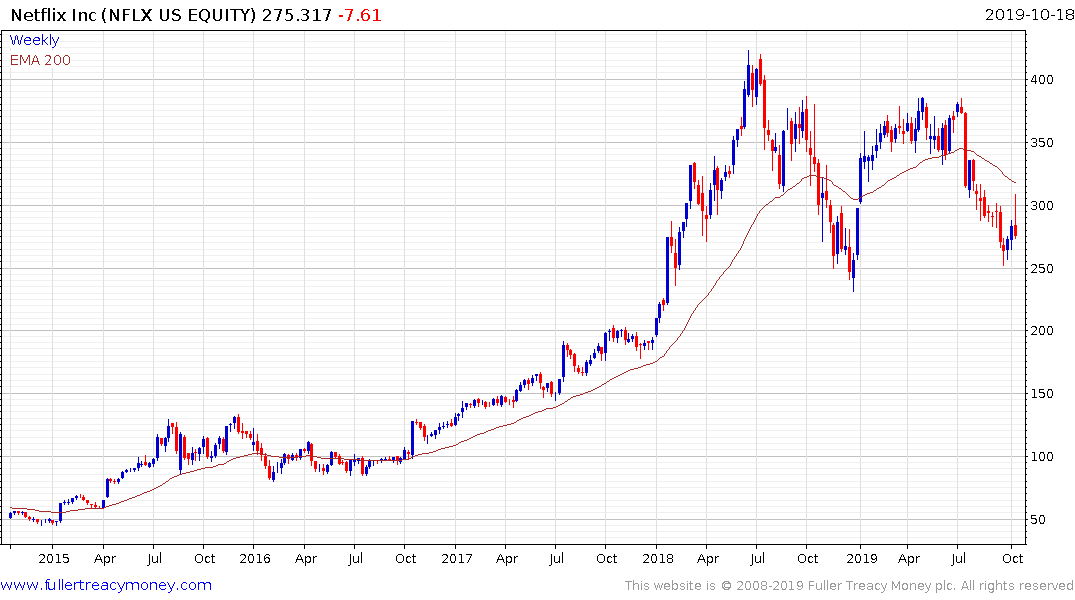 Netflix peaked in the middle of 2018 and remains under pressure; particularly as international competition increases.