In recent decades our microbiomes have been altered by poor dietary habits; overuse of disinfectants, antibiotics, and other germ fighters; dwindling contact with vital environmental microbes, including those carried by wildlife and livestock; and the rise in cesarean section births, which don’t immerse babies in the valuable bacteria found in the birth canal. According to one 2015 study, Americans’ microbiomes are about half as diverse as those of the Yanomami, an isolated Amazonian tribe. A series of studies begun in 1998 examined the relationship between bacteria and disease incidence in the Finnish-Russian border region of Karelia, where people share similar genetics. On the richer, cleaner Finnish side, people were as many as 13 times likelier to suffer from inflammatory disorders as on the Russian side, where the majority live in rural homes, keep animals, and tend their own gardens.

A comparable American study, published in 2016, examined the genetically similar Hutterites of South Dakota and Amish of Indiana. The Hutterites, who use pesticides and industrial farming techniques, had higher asthma incidence, 23 percent, than almost any other U.S. group. Among the Amish, who farm without chemicals and rely on manpower and horses, the condition is quite rare. To see whether each community’s respective bacterial populations were affecting people’s health, researchers collected dust samples from Hutterite and Amish bedrooms, mixed them with egg proteins, then gave them to mice with an egg-protein allergy. The mice exposed to Hutterite dust developed extreme asthmatic symptoms, whereas those exposed to Amish dust exhibited almost no allergic response.

These and many more studies have some scientists fearing that people, especially in the West, are cleaning themselves sick. The trick for companies hoping to cash in on the countervailing trend will be to figure out which microbes help restore human health. It won’t be easy. “Most of the species in our body don’t have names. They’ve not been cultured,” says Robert Dunn, a professor of applied ecology at North Carolina State University, whose most recent book, Never Home Alone, details the relationship between nature and health. “Nobody has studied them in any real detail.”

The cells of the organisms that make up the microbiome outnumber our own so there is a logical question as to whether we play hosts to them or they us. The rising incidence of autoimmune diseases and allergies is a serious cause for concern and recent research suggests there is a clear pathway of communication between the gut and the brain. There is also evidence that faecal transplants can improve the symptoms of autism and Parkinson’s patients.

The range of potential applications and the dearth of knowledge relating to the subject suggests we can expect this to be a potent area of scientific discovery for decades to come. Large companies such as BASF, Clorox, Unilever and S.C.Johnson are clearly interested but it will be some time before microbiome products represent a sizeable portion of these revenue. 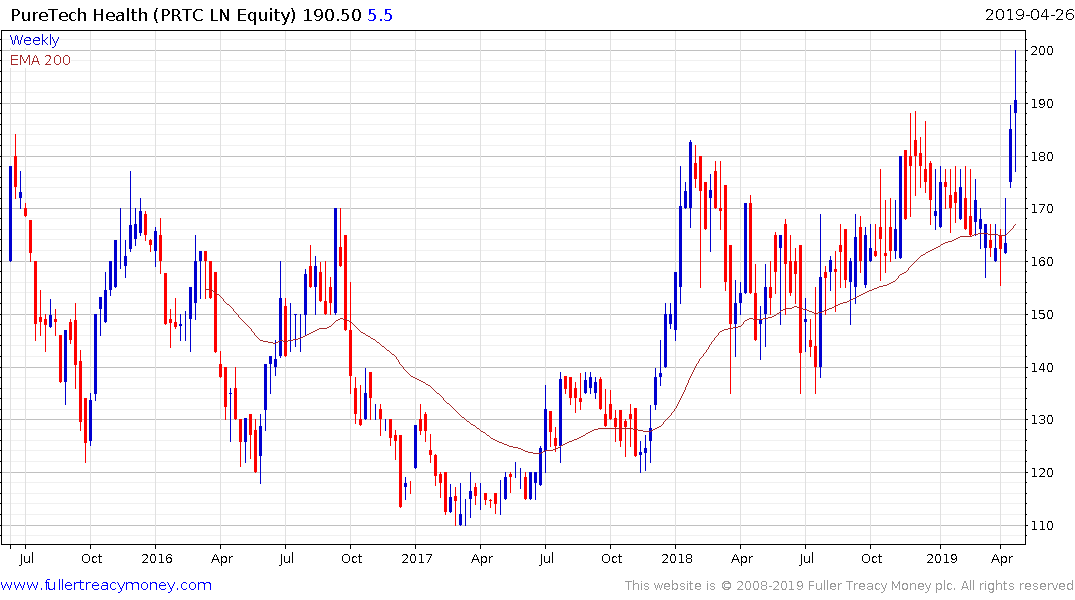 PureTech Health is a UK listed investor in early stage biotech companies with a particular focus on gastrointestinal issues. The share posted weaker than expected earnings yesterday but the share rallied well off its lows as it tests its highs.