Merger activity has underpinned gains for the sector. Valeant Pharmaceuticals International Inc., up 52 percent in 2015, has announced 10 acquisitions this year.

Managed-care companies, including insurers and hospitals, have also seen gains this year due to merger frenzy. Unlike their biotech peers, they’ve found strength since Clinton’s tweet, with HCA Holdings Inc., Aetna Inc., Anthem Inc. and Universal Health Services Inc. adding more than 1 percent over the past three days.

The best way forward for biotech investors may be to sell holdings, rather than hedge against potential losses, according to Walter “Bucky” Hellwig of BB&T Wealth Management.

Biotech stocks “substantially outperformed earlier in the year,” said Hellwig, who helps manage $17 billion as a senior vice president at BB&T Wealth Management in Birmingham, Alabama.
“It’s a logical place in the mind of investors as a place to start taking some profit.”

Clinton wasn’t the first influential public figure to criticize the industry. Federal Reserve Chair Janet Yellen called out the sector as overvalued on two occasions in the past 14 months, most notably in July 2014, when she referred to biotech valuations as “substantially stretched.”

A big question for the biotech and health insurance sectors is how likely is the feverish pace of merger activity to persist in an environment where the highest volatility levels in three years have been sustained for more than a month. Corporations were racing to close deals ahead of the Fed’s recent meeting in part because they anticipated they would lose access to cheap financing. The Fed might not have raised rates but confidence has deteriorated not least because of the extreme volatility experienced on August 24th. Politicians taking populist positions against companies also act as a disincentive to become so large as to become a target. 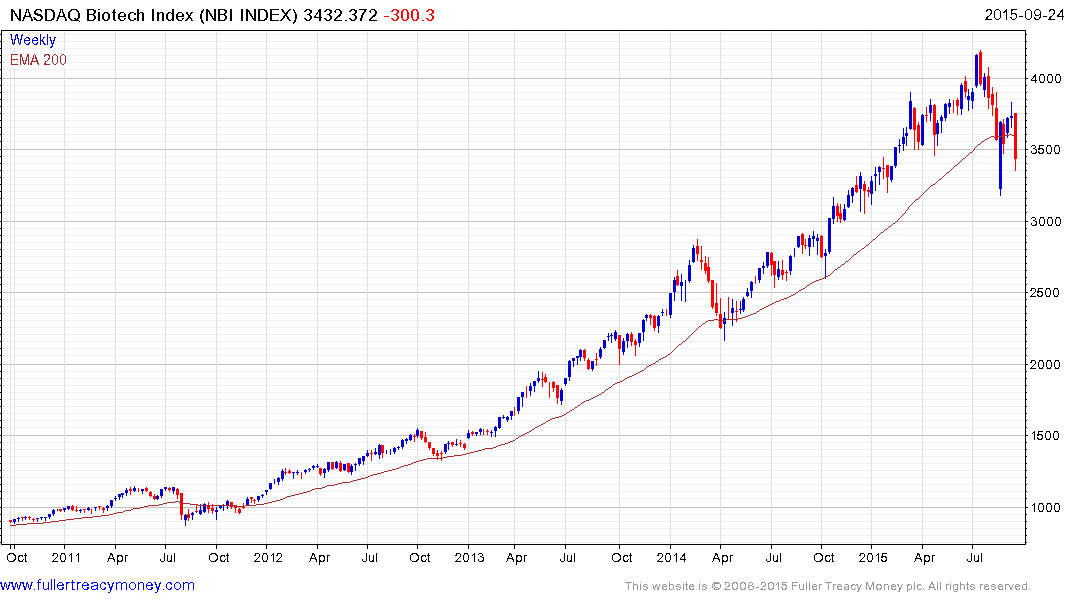 The Nasdaq Biotech Index exhibited one of the most consistent trends in the world between 2011 and July when it hit a medium-term peak and experienced a massive reaction against the prevailing trend. It has now encountered resistance in the region of the lower side of the overhead range and a sustained move above 3750 would be required to question medium-term supply dominance.