Citi Says Palladium in Total Disconnect, Jump In After Slump
Comment of the Day

Citi Says Palladium in Total Disconnect, Jump In After Slump by Eoin Treacy

The raw material used in autocatalysts has soared in the opening weeks of 2020 amid a sustained global deficit, with the extraordinary rally seeing prices hit records day after day before a pullback on Tuesday. Over the past 15 years, mine supply of palladium has shrunk by 1 million ounces, or 12%, while demand has risen 4 million ounces, or 57%, according to estimates from UBS Group AG. Palladium’s sister metal, rhodium, has jumped too.

“Commodity prices can completely disconnect from their marginal cost of production when inventories run down to critical levels, and this is precisely what is occurring in palladium and rhodium at present,” Citi said. “Palladium has for some time now presented the hallmarks of a genuinely tight market, including an extreme backwardation.”

Another day, another $100+ advance in palladium. This speed of the acceleration since the announcement of the trade deal is nothing short of historic. There has been a lack of a supply response to date not least because of the uncertainty about the trajectory of global growth. If the continued supply of liquidity has the desired effect of confirming the trough in global growth, it will both be a boon for palladium demand but will also encourage additional supply into the market. 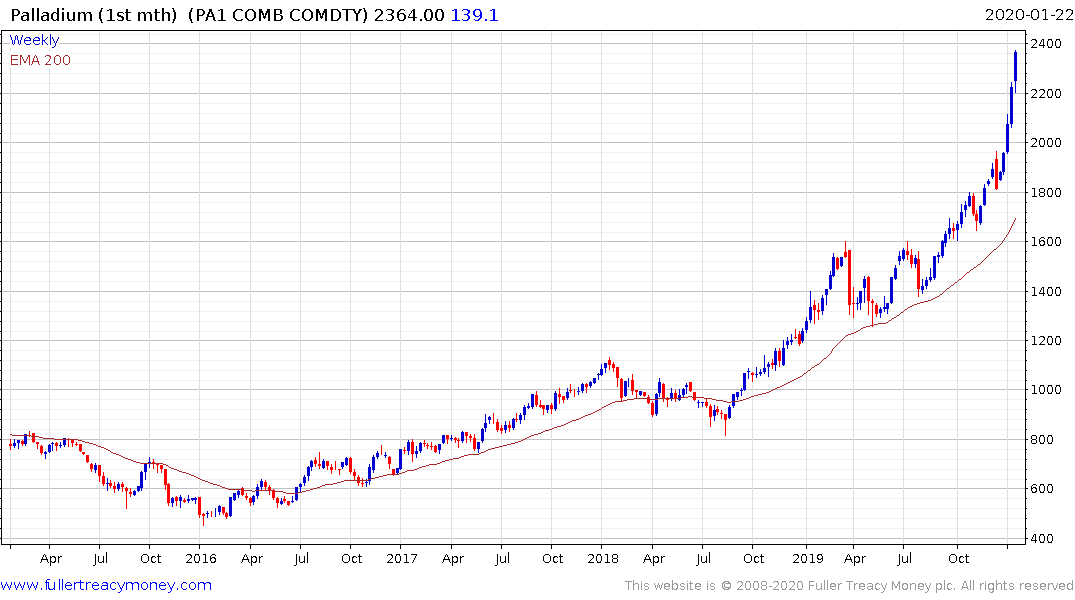 Palladium is most often produced as a by-product of nickel and platinum mining. Both of these metals have been subject to quite a bit of volatility over the last couple of years which has contained the supply of palladium. Neil Froneman, CEO of Sibanye was quoted today saying he was reluctant to lift platinum supply because it would pressure the price.  Here is a section:

“Palladium, rhodium and gold are I think in good territory from a supplier point of view. Platinum remains relatively depressed,” Mr. Froneman said. “So we need to be very careful about producing more platinum at this stage, because we will depress the price even more, and of course in South Africa that’s our primary product.” 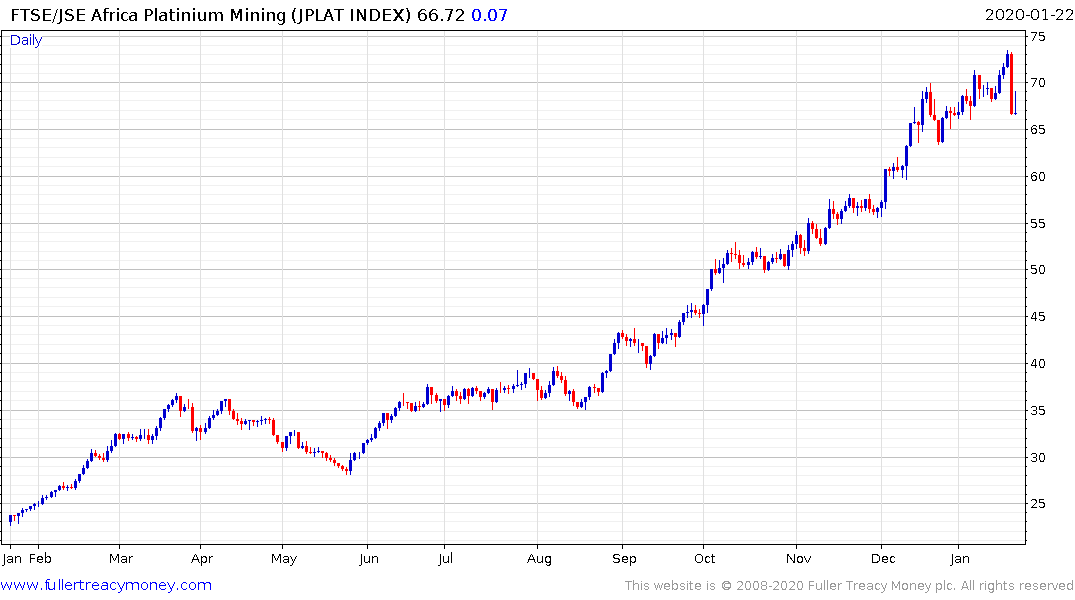 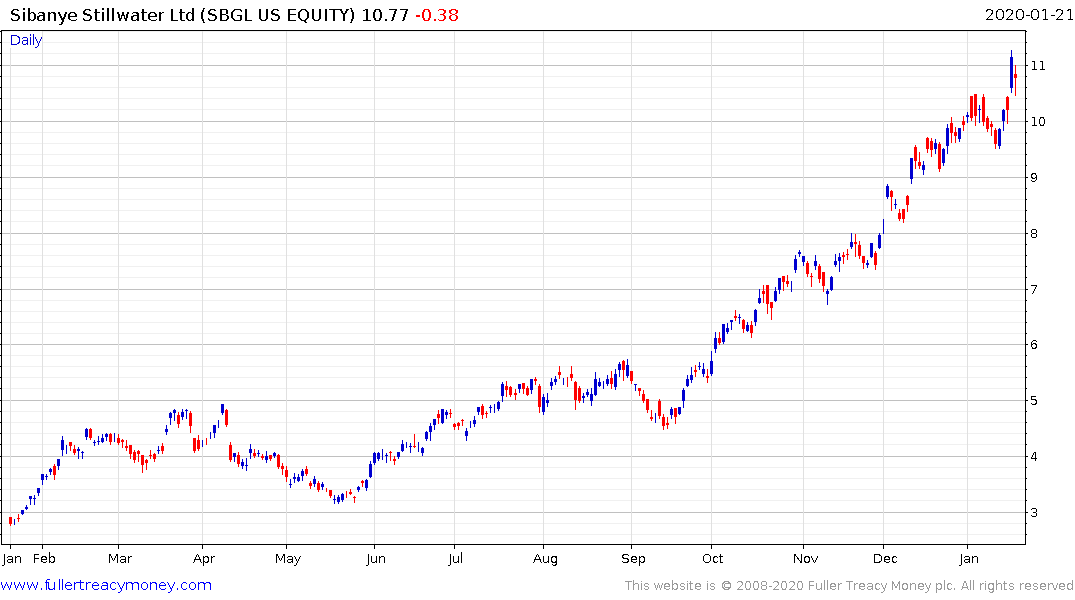 One of the oldest adages from the commodity markets is “the cure for high prices is high prices.” A supply response will come. The only question is when and the higher the price of palladium goes, the more compelling the argument for substitution becomes. Meanwhile platinum is consolidating above $1000 and has base formation completion characteristics. 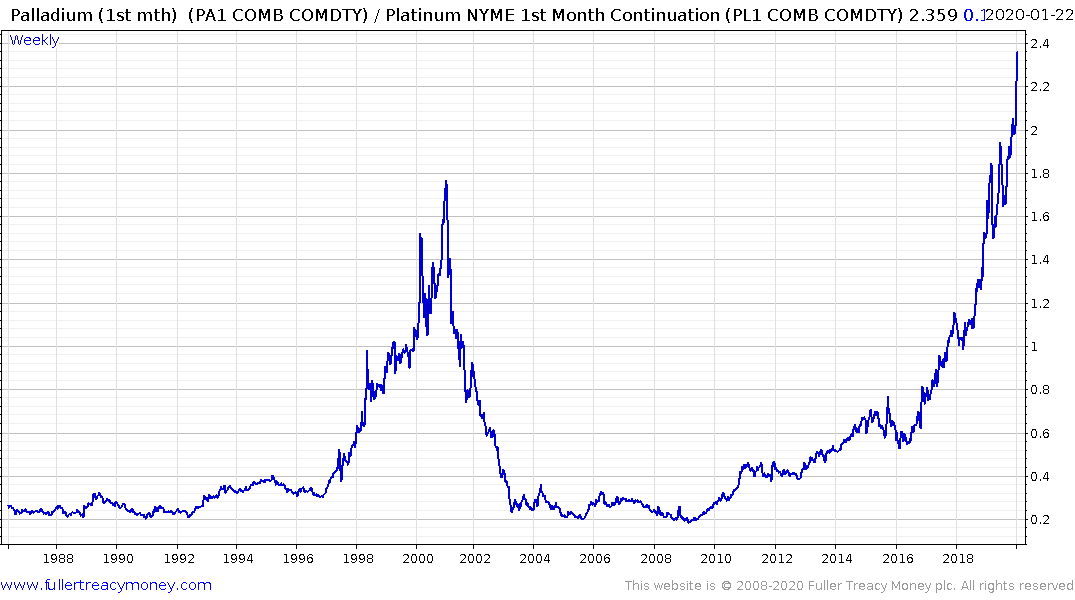 The Palladium/Platinum ratio is now considerably higher that the peak reached in the early 2000s and its acceleration is particularly noteworthy. The first clear reversal is likely to be a relative peak of medium-term significance.