Global sales of chocolate confectionary will gain 2.1 percent to a record 7.3 million tons next year, after a 2 percent gain in 2013, estimates Euromonitor International Ltd. Sales in China more than doubled in the past decade, outpacing gains in Western Europe, the biggest consumer. Tighter supplies will mean higher costs for food makers including Nestle SA, Barry Callebaut AG and Lindt & Spruengli AG.

"Demand for chocolate is great," said Ashmead Pringle, the president of Atlanta-based GreenHaven Commodity Services, which oversees about $340 million. "A lot of the world population is moving to the middle class and will have more money to spend, in particular in emerging markets and Asia."

Cocoa exhibits one of the firmer chart patterns within the commodity complex and has been supported by disappointing crops in West Africa as well as continued growth in demand. Since the life cycle of the cocoa tree involves five years from sapling to pod production, increasing supply represents a medium-term challenge.

LIFFE traded cocoa is trading in backwardation throughout the futures curve. Prices have held a progression of higher reaction lows since June and are now testing the 1800p region. A sustained move below 1700p would be required to question current scope for additional upside.

Sugar, another major ingredient in confectionary is also worthy of mention. The US traded contract has fallen for nine consecutive weeks and continues to post new reaction lows. While becoming increasingly oversold in the short term, a clear upward dynamic will be required to check the slide.

Against this background Nestle is an S&P Europe 350 Dividend Aristocrat and continues to range above CHF60. It will need to hold above this area if medium-term potential for additional upside is to continue to be given the benefit of the doubt. 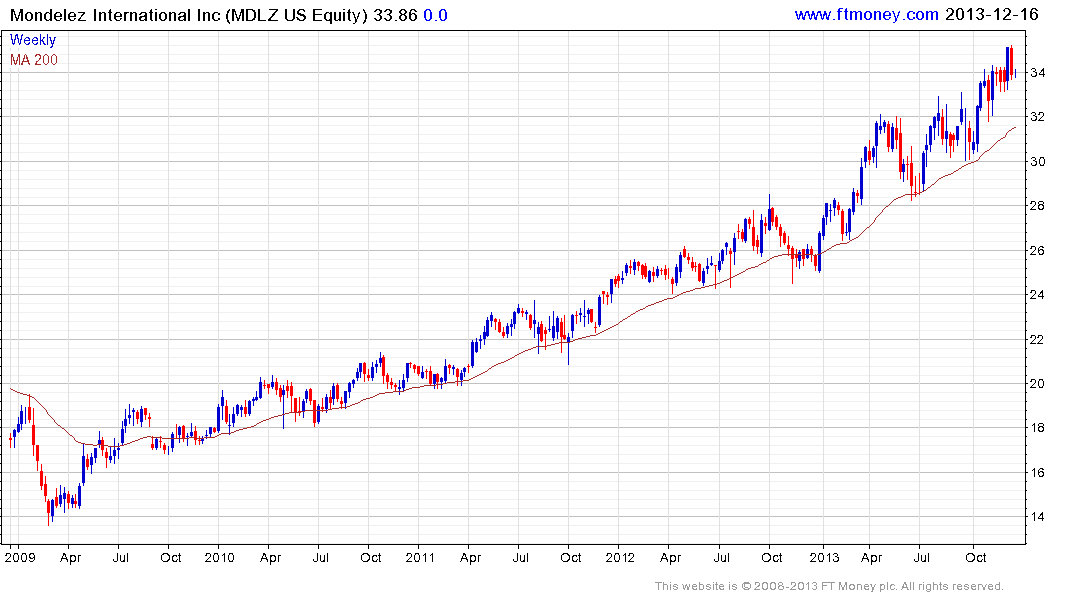 US listed Mondelez International has held a progression of higher reaction lows since 2009 and is now susceptible to one of its periodic reversions towards the mean.