Chip Crisis Shows Signs of Easing, But There's a Catch
Comment of the Day

Chip Crisis Shows Signs of Easing, But There's a Catch by Eoin Treacy

Still, it’s probably too soon to declare an end to the shortage. Outbreaks of the delta variant of Covid-19 and the long-term efficacy of vaccines make predictions even harder than usual. Some chip analysts have said that reports of weakness are primarily seasonal and that sales will pick up through next year.

Shortages also vary by part. So even if you can walk into a store and find plenty of laptops, you’ll still struggle to get a new car or a video game console. In some cases, chip delivery times are longer than 20 weeks, the longest wait in at least four years.

But as I wrote last month, the pandemic rush to computers and printers won’t repeat itself. Once a worker or student buys a laptop, they don’t need another one for several years. Retailers are offering extensive discounts on nearly every PC-related category, with the exception of graphics cards. (It’s still a good time to be in the games business.)

Semiconductors have an outsized impact on inflationary measures these days because of the reliance of the automotive sector on microcontrollers. Transportation represents 15.7% of the CPI figure and 9.8% of the PCE figure.

The steep increase in the price of vehicles because of a shortage of chips has been a significant contributory factor in the perception that inflation is running out of control. As supply catches up with demand that impact on price pressures will wane.

Nothing has happened to question the cyclicality of the chip manufacturing sector. High prices encourage significant investment in new supply lines which will keep running even as demand is overwhelmed. It is not a matter of if this will occur, only when the effects will be most acutely felt. 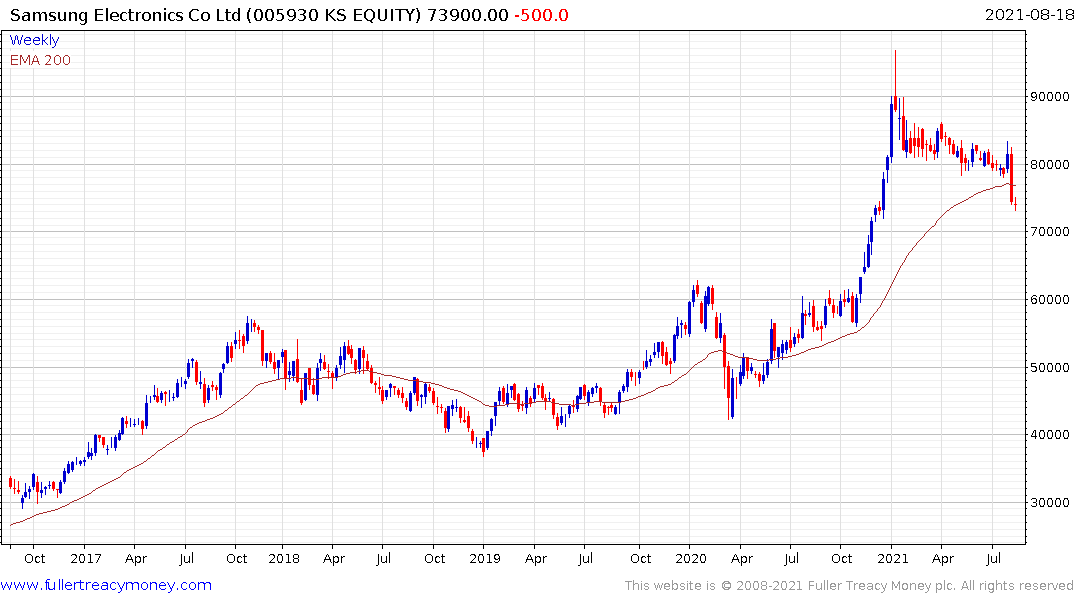 Samsung Electronics has broken downwards to complete a medium-term formation.

Taiwan Semiconductor accelerated to its January peak and has been ranging below TWD600 for most of this year. It is now testing the region of the trend mean and a clear upward dynamic will be required to confirm support in this area. 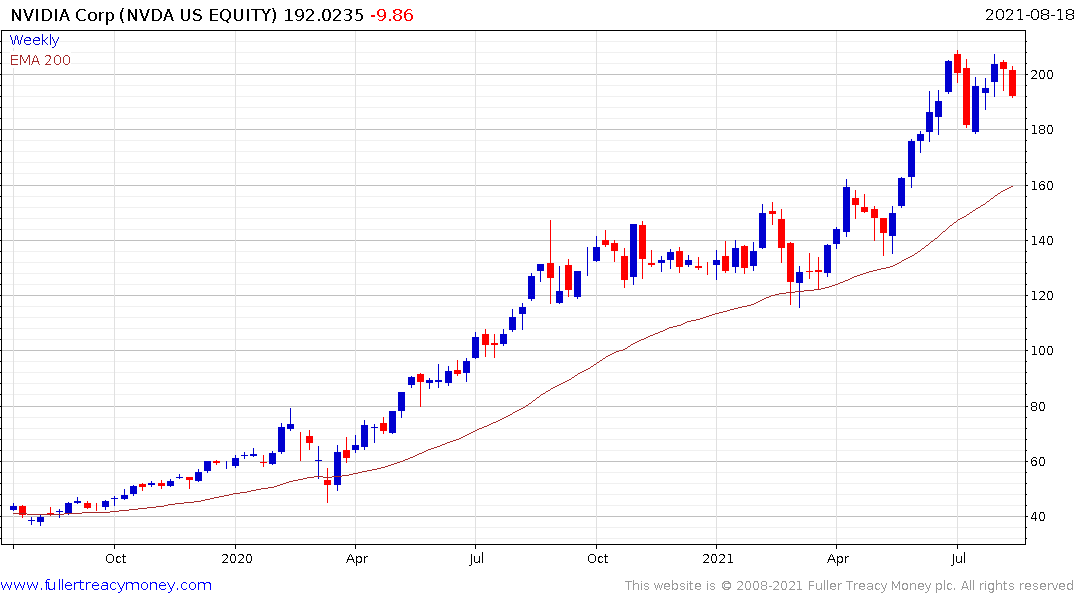 Nvidia continues to pause around the psychological $200 level is susceptible to additional mean reversion. 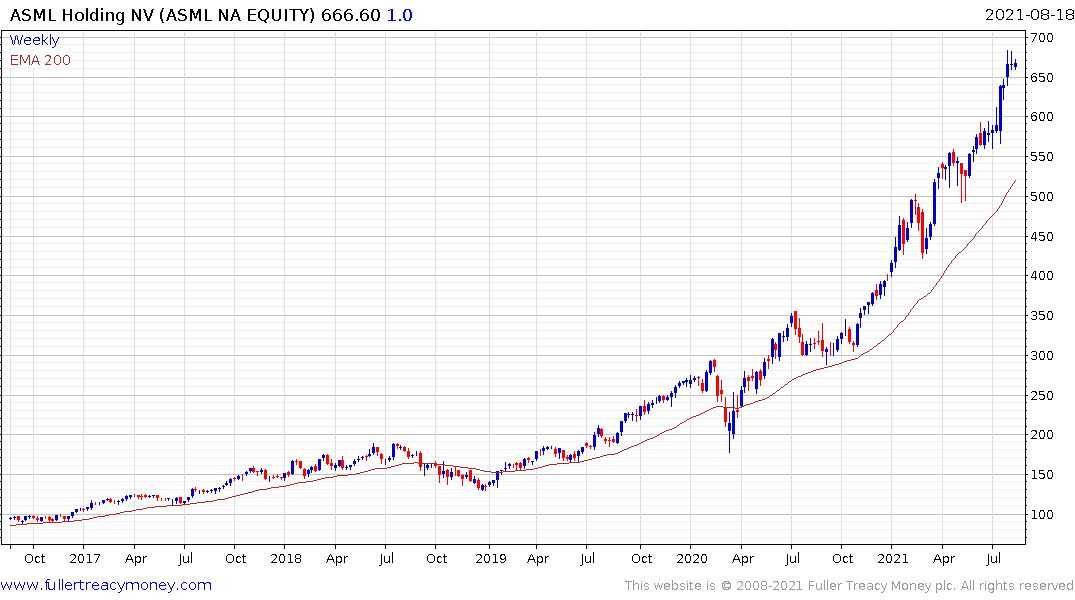 ASML remains a standout because of its steep but consistent uptrend. How long that is sustainable as chip supply ramps up is questionable but there is no sign of supply dominance for now. 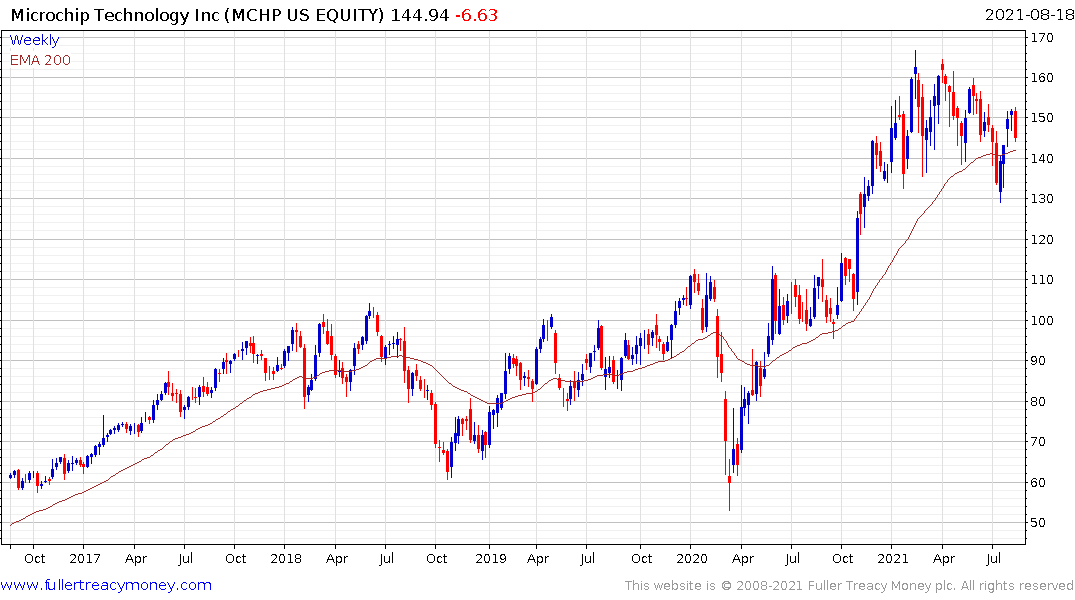 Microchip Technology has held a sequence of lower rally highs since February and is working on a downside weekly key reversal at present. The share posted a failed downside break in July and bounced impressively but the big question right now is whether it can hold the low. 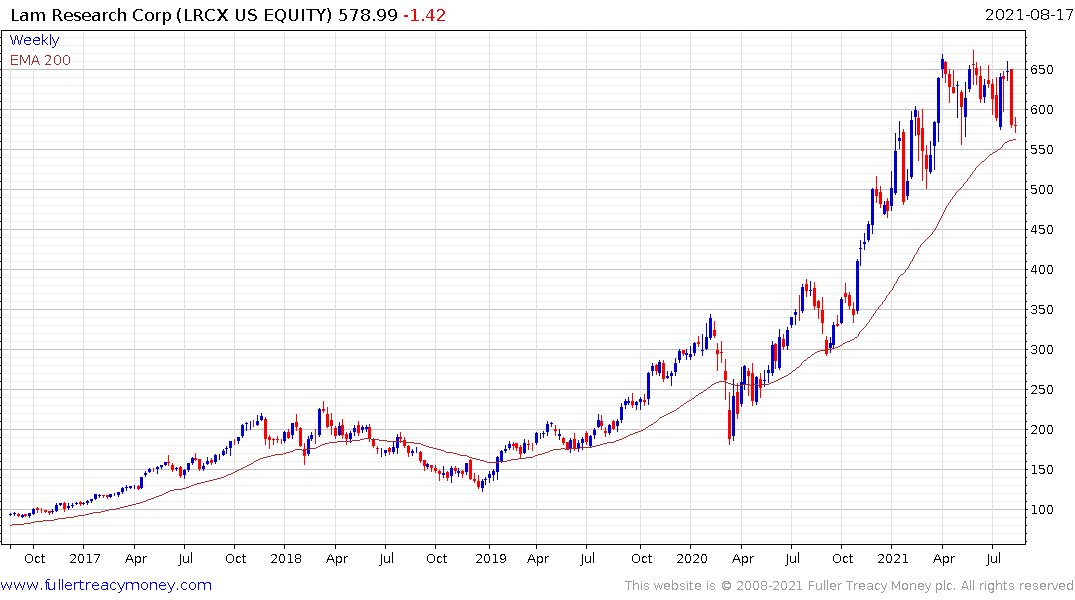 LAM Research has lost momentum and posted a number of failed upside breaks over the last five months. It is now back testing the trend mean and the lower side of the range. If demand is going to return to dominance this is the area that needs to happen to avoid top formation completion. 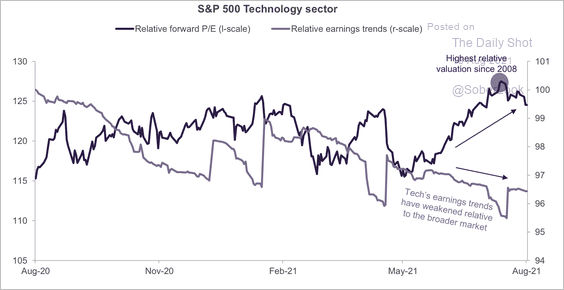 This chart of the S&P500 Tech sector’s relative forward P/E suggests a peak compared to the wider market. Apple and Microsoft are the two big weightings in that sector at 22.8% and 20.5% of the market cap respectively. 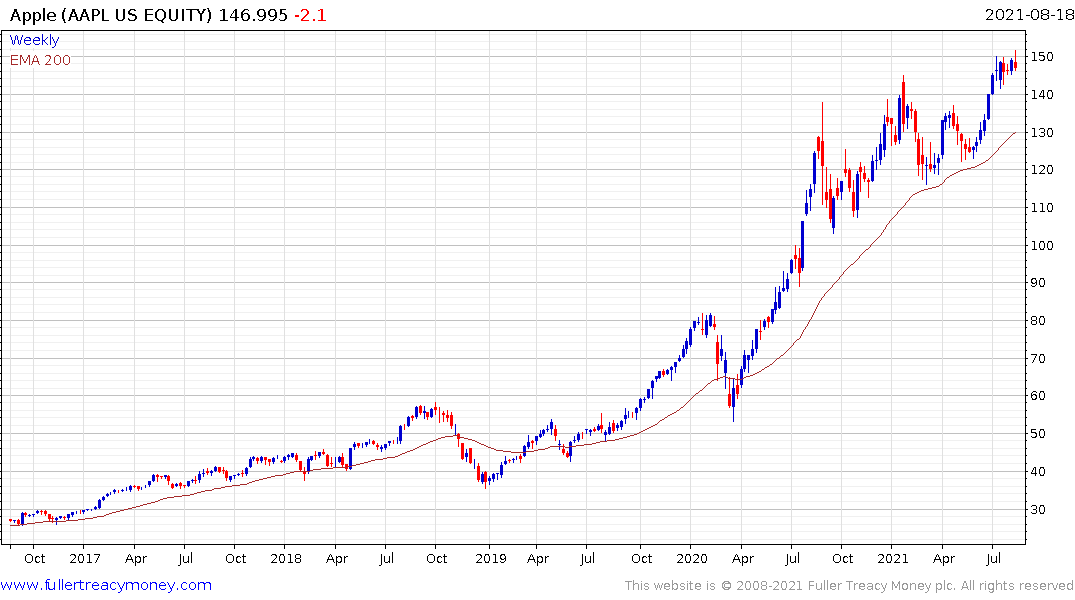 Apple has been ranging in a tight band for a month as it continues to hold the breakout to new all-time highs. 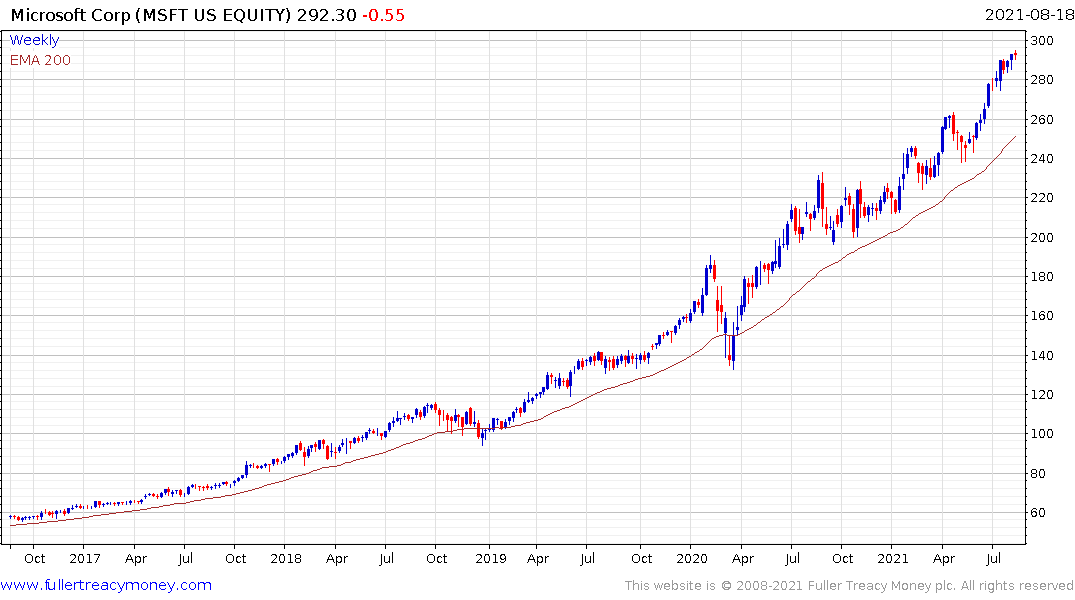 Microsoft remains in a reasonably consistent uptrend. It is worth considering that neither of these shares is as cyclical as they used to be following the adoption of a subscription business model.