Chinese vaccines sweep much of the world, despite concerns
Comment of the Day

Chinese vaccines sweep much of the world, despite concerns by Eoin Treacy

China’s vaccine diplomacy campaign has been a surprising success: It has pledged roughly half a billion doses of its vaccines to more than 45 countries, according to a country-by-country tally by The Associated Press. With just four of China’s many vaccine makers claiming they are able to produce at least 2.6 billion doses this year, a large part of the world’s population will end up inoculated not with the fancy Western vaccines boasting headline-grabbing efficacy rates, but with China’s humble, traditionally made shots.

Amid a dearth of public data on China’s vaccines, hesitations over their efficacy and safety are still pervasive in the countries depending on them, along with concerns about what China might want in return for deliveries. Nonetheless, inoculations with Chinese vaccines already have begun in more than 25 countries, and the Chinese shots have been delivered to another 11, according to the AP tally, based on independent reporting in those countries along with government and company announcements.

This map of China’s vaccine exports is very impressive and highlights just how high global demand for any form of vaccine is. China’s commitment to export hundreds of millions of doses before inoculating its domestic population and the spotty efficacy data for its shots suggests there is more at work than meets the eye. 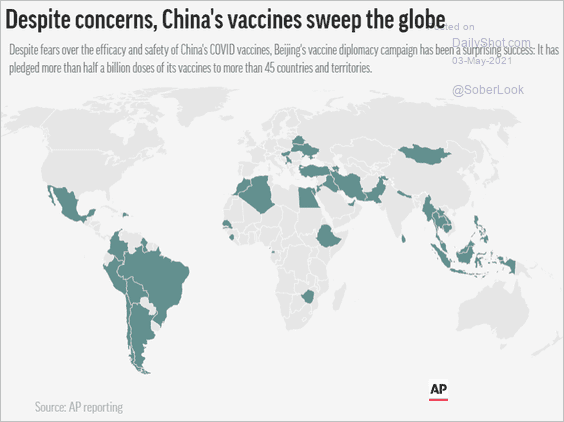 Exports are about building goodwill with other emerging markets, so a geopolitical agenda can be furthered. The fact that the Seychelles is the most inoculated country in the world and is now experiencing a fresh outbreak raises additional questions about the low efficacy data for some Chinese vaccines.

One of the first bills to be passed after the Biden Administration took office was a prohibition on Asian hate speech. It passed in the Senate 94-1. That’s laudable but it is also part of the wider high-level pivot to differentiate Chinese looking people from the Chinese Communist Party in the eyes of citizens. Dr. Lawrence Sellin has recently taken to YouTube to talk about his perspective on China’s history of developing biological agents as part of military research but has been careful to only mention the CCP and not China. This is another example of how the hardening of attitudes towards China is transferring into the current US administration.