The PBOC is expected to conduct its monthly MLF operation on Wednesday, with 600 billion yuan due. Last week a central bank official said that interbank liquidity should remain balanced in the coming months, damping speculation that there’ll be another cut in the required reserve ratio soon.

Money market traders are more cautious this month as cash demand could rise due to quarter-end regulatory checks and before China’s Golden Week holiday in early October. If the maturing MLF is not mostly rolled over or covered by another liquidity injection, market sentiment is likely to be further impacted, said Frances Cheung, rates strategist at Oversea-Chinese Banking Corp.

Evergrande Woes
Concern about the property sector amid the potential restructuring of China Evergrande Group -- the world’s most indebted developer -- could also be impacting swap rates.

Over the May holiday weekend, Didi snuck through an IPO in the USA while the Chinese regulators were away from work. That allowed the original investors to divest of at least some of their position before the company is dissected. As we approach the Mid-Autumn Festival Golden Week festival, where everyone will be on vacation for a week. and the stock market will be shut, it seems like an ideal time for creditors to make a move on Evergrande. 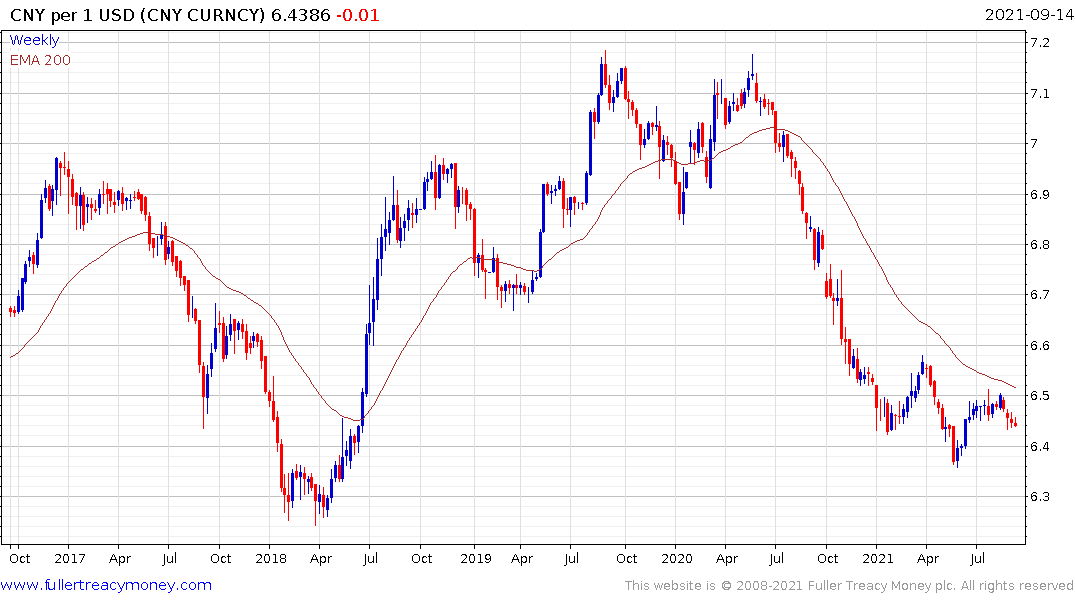 Selling of Dollars in the swap market is also a symptom of the need to raise onshore liquidity to provide a cushion against tight liquidity in the event of a major bankruptcy. That’s putting upward pressure on the Renminbi which is firming from the region of the trend mean. 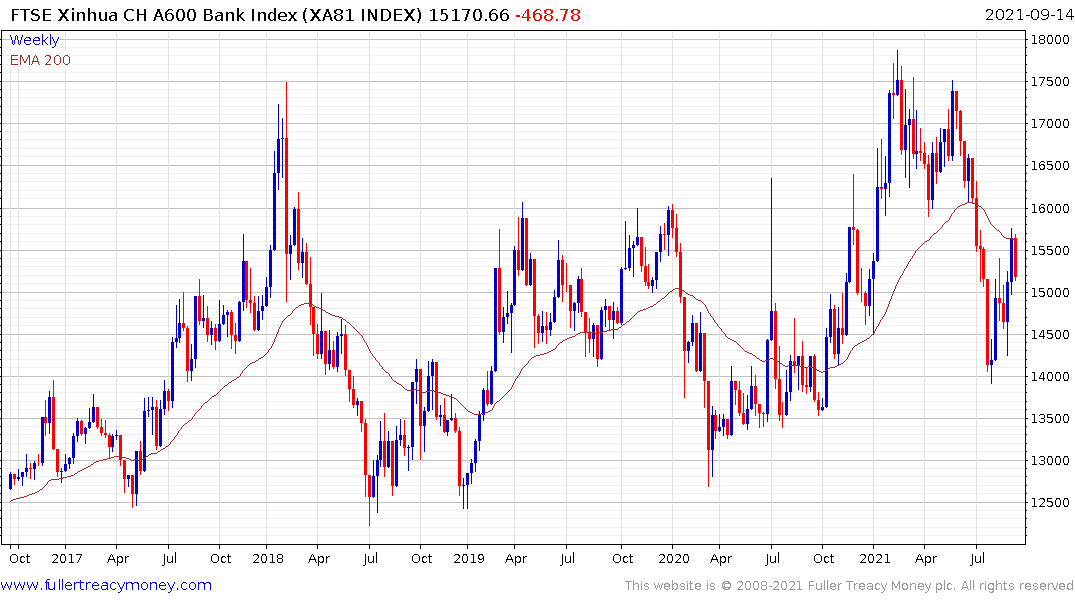 The Xinhua A600 Banks Index pulled back in a dynamic manner today from the region of the trend mean. That suggests at least some near-term reticence to continue to support the sector with so much uncertainty about the fallout from Evergrande’s failure. 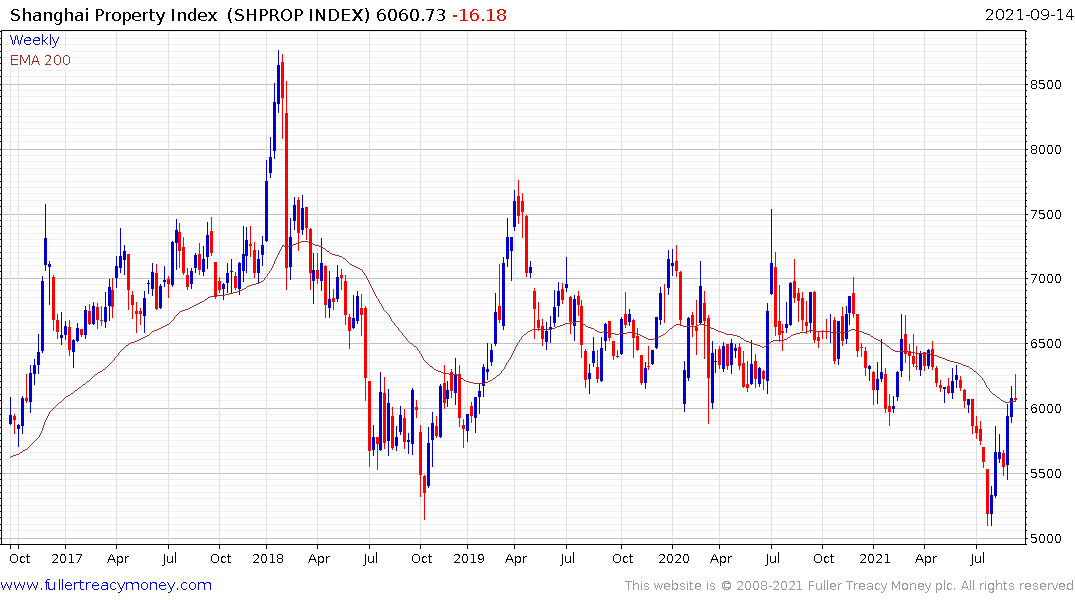 The Shanghai Property Index has also paused in the region of the trend mean and at least some consolidation of the six-week rebound appears likely. 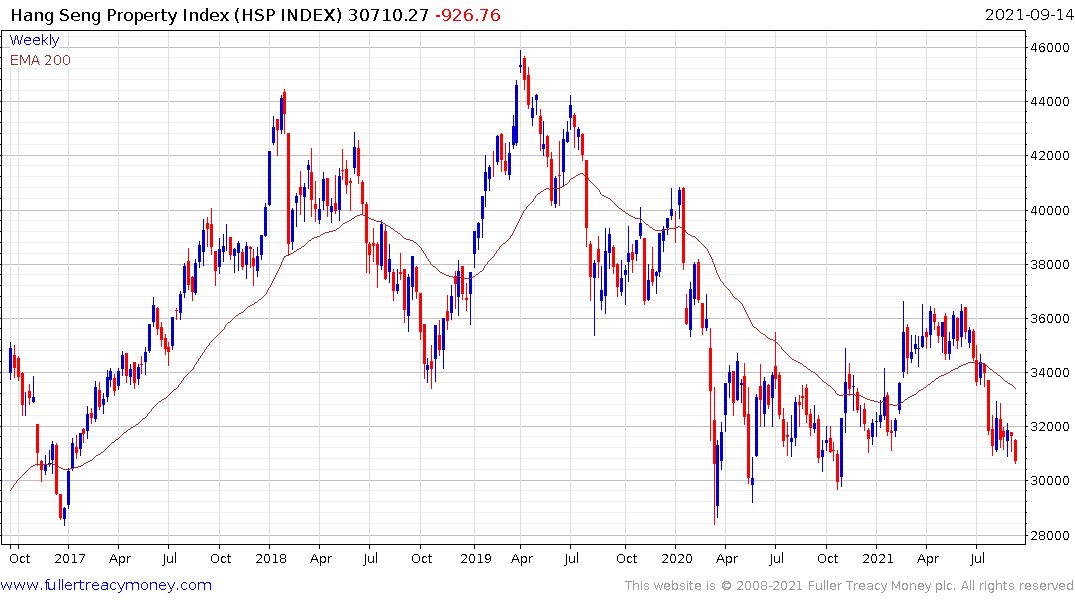 The Hang Seng Properties Index broke down to a new reaction low today. A clear upward dynamic, similar to those posted on past tests of the psychological 30,000 level will be required to check the downward bias.

Contagion within the property developers’ sector is the primary risk from a China Evergrande bankruptcy. So far, that risk has been relatively well contained but it is an important potential trend to monitor.

I am reminded of Europe’s sovereign wealth crisis. The Global Financial Crisis occurred in 2008 but the full effects of the liquidity crunch didn’t become evident in Europe until 2012 when Greece’s government bond yields peaked at over 40%. The upset from the GFC created ripple effects across the financial system that eventually forced significant recalibration of the Eurozone project. It is reasonable to conclude that the pandemic will have a significant impact as well and liquidity in the Chinese property market is a potential flash point that needs to be monitored for contagion risk. At a minimum it suggests China will need to rethink its tight liquidity policy.