China’s bracing for a cold snap this week, with temperatures in some regions forecast to fall by as much as 15 degrees Celsius. Vegetable prices typically rise when the temperature drops in winter and supply is unable to catch up with increasing demand before the Lunar New Year holiday.

The Monday statement told local commerce departments to coordinate more to improve local and inter-provincial supply chains for vegetables and also to strengthen monitoring of the prices of key staples such as vegetables and meat.

Major agricultural distributors were encouraged to sign long-term contracts with producers, while provinces in both southern and northern China were told to improve their vegetable reserve systems and also release meat and vegetables from the reserves in a timely manner to replenish supplies.

The call to stock up on food comes less than two weeks after a different government department told companies not to hoard food.

Food prices are rising everywhere and that is putting everyone on edge. The experience of empty supermarket shelves was isolated to only a few household items during the pandemic while supply of staples was relatively constant. We’re still eating the rice we bought in January 2020 as a precautionary measure for example. (The chocolate is long gone).

Right now, we are living the repercussions of a smaller harvest. Farmers did not plant their usual number of acres because they did not have ready access to labour. Therefore, yields were already lower before inclement weather struck in Europe, North American and Brazil. 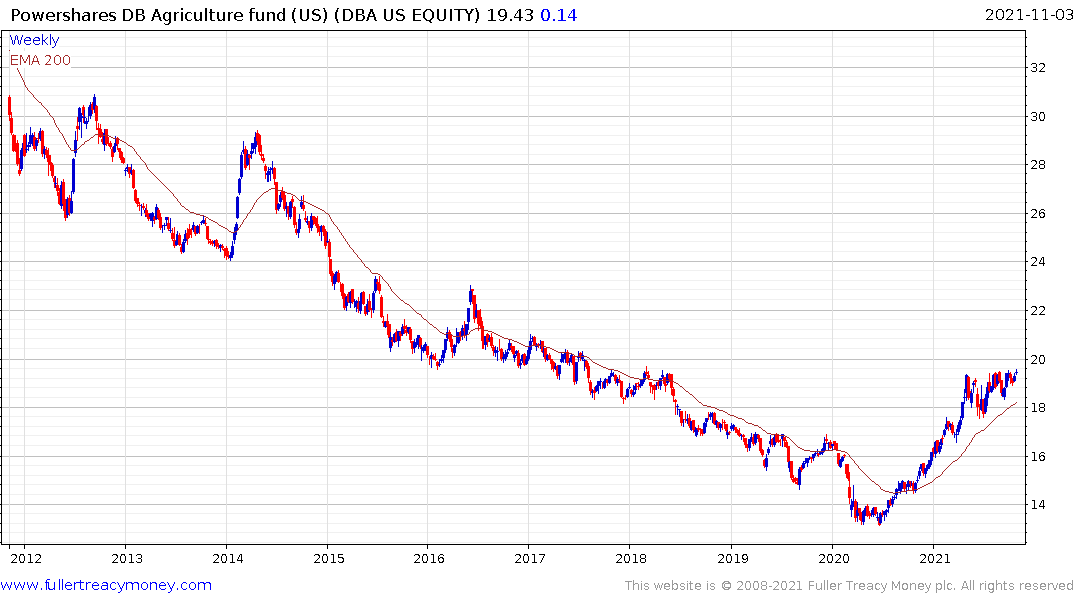 The Invesco DB Agriculture Fund is testing the upper side of its range and looks more likely than not to be able to sustain a breakout.

The challenge for China is the uncertainty of where the next lockdown will occur. The delta variant is extremely virulent and has been difficult to stamp out even with the strictest countermeasures. The slow rollout of western vaccines has hampered the removal of quarantines and that’s unlikely to change anytime soon. That suggests China is going to be a significant buyer of raw food commodities on the international market this winter.