Chinese steel mills are under pressure from poor demand growth due to slower economic growth, as well as an anti-pollution campaign launched by Beijing.

With cashflow already squeezed by weak margins and tighter access to credit, mills are looking to slash costs to help find the funds to meet stricter environmental rules.

A Xiamen-based iron ore buyer for a Chinese steel mill told Reuters he was negotiating to delay deliveries of iron ore shipments under long-term contracts that amount to 5 million tonnes a year.

A growing number of steel mills are running down their inventories, selling iron ore cargoes back to the market, often even before they arrive.

"There are more Chinese steel mills reselling their long-term contract cargoes this year and they prefer to buy from port inventories at lower cost," said an official at a state-owned Chinese steel producer.

Mills seeking short-term supplies can buy iron ore stocks sitting at Chinese ports for about $5 a tonne less than seaborne cargoes, on average, said a trader in Shanghai.
Stockpiles of imported iron ore at 44 Chinese ports hit a record high 113.3 million tonnes as of May 23, according to Steelhome, which tracks the data.

Big miners, however, argue that as prices fall, imports will replace high-cost Chinese producers who will be squeezed out.

Iron-ore prices are generally quite difficult to obtain. The Metals Bulletin price we used to receive from Bloomberg was discontinued in March. In the Chart Library, I would suggest looking at the price paid by Chinese steel companies for the ore they import which we can reasonably assume is reflective of the global benchmark. 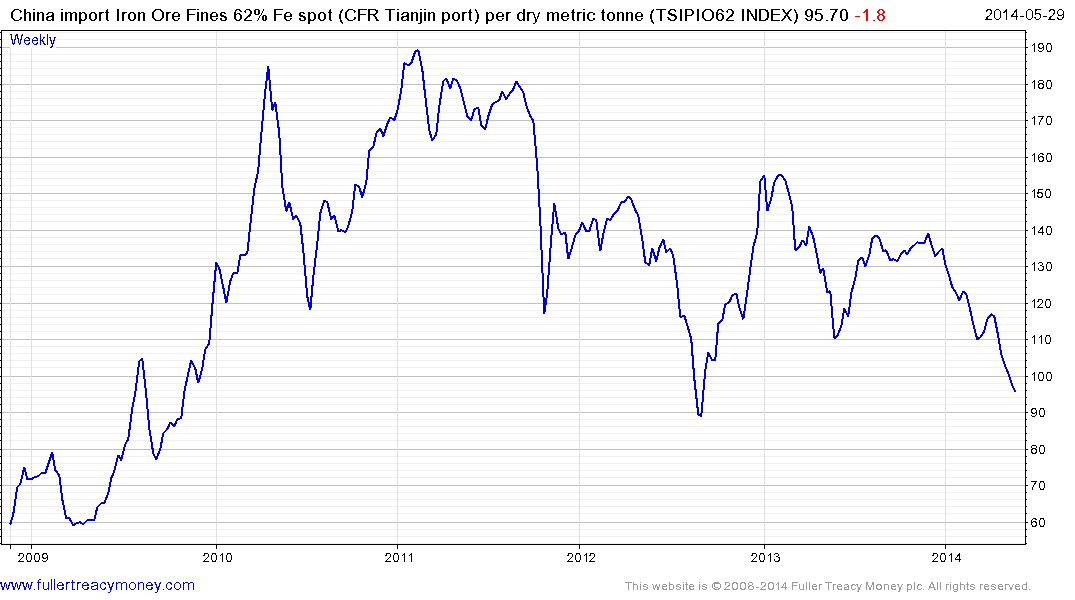 The China Iron-Ore Imports of 62% Fines to Tianjin has returned to test the 2012 lows near $90. While a short-term oversold condition is increasingly evident, a clear upward dynamic will be required to check momentum and increase the possibility of a reversionary rally.

The major iron-ore producers have a cost advantage relative to domestic Chinese producers which has allowed them to dominate the market over the last decade. As Chinese steel production rationalises, there will still be a place for iron-ore shipments and the major producer’s cost advantage will be burnished but there is little evidence yet that the oversupply situation has moderated.

A JP Morgan report that crossed my desk but which I do not have permission to post holds that VALE is priced as if iron-ore prices were already at $80. We might yet see those levels but this illustrates that a great deal of bad news is already in the price. If this worst case scenario fails to play out, the share could be considered cheap. 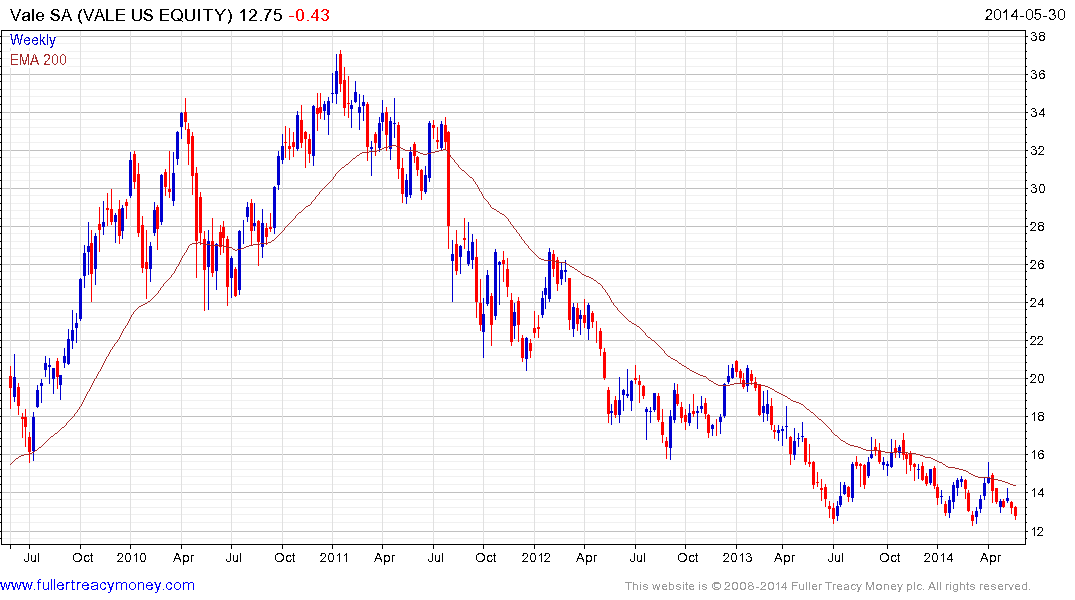 VALE (Est P/E 6.31, DY 6.39%) has been ranging above $12 since July 2013, but the more than 3-year progression of lower rally highs remains intact. A sustained move above $14 would confirm a return to demand dominance beyond the short term.