Companies currently listed in the U.S. and Hong Kong that use VIEs would need to make adjustments so their ownership structures are more transparent in regulatory reviews, especially in sectors off limits for foreign investment, the people said. It’s unclear if that would mean a revamp of shareholders or, more drastically, a delisting of the most sensitive firms -- moves that could revive fears of a decoupling between China and the U.S. in areas like technology. Details of the proposed rules are still being discussed and could change.

The overhaul would represent one of Beijing’s biggest steps to crack down on overseas listings following the New York IPO of ride-hailing giant Didi Global Inc., which proceeded despite regulatory concerns. Authorities have since moved swiftly to halt the flood of firms seeking to go public in the U.S., shuttering a path that’s generated billions of dollars for technology firms and their Wall Street backers.

It’s all part of a yearlong campaign to curb the breakneck growth of China’s internet sector and what Beijing has termed a “reckless” expansion of private capital. Banning VIEs from foreign listings would close a gap that’s been used for two decades by technology giants from Alibaba Group Holding Ltd. To Tencent Holdings Ltd. to sidestep restrictions on foreign investment and list offshore. It potentially thwarts the ambitions of firms like ByteDance Ltd. contemplating going public outside the mainland.

The era of China’s “don’t ask, don’t tell” regulation of the equity market is over. The government has been suspicious of the ease with which companies were raising capital overseas for years. The most particular concern is that foreign interests are gaining control of boards and companies are too independent from government oversight. That’s particularly true as plans become more ambitious and require national focus. Didi’s sneak listing, while regulators were away from the office, brought the issue to a head.

Forcing companies to relist from the US to China/Hong Kong is a long-term objective and will not occur overnight, but the trend is undeniable. The big question for international investors will be in how willing China will be to allow investors to take positions in Hong Kong listings or will they insist that majority ownership remains in the hands of mainland investors so boards can be controlled?

If the window for generating fees from overseas listings is closing, that begs the question, how will Chinese companies source funding and how will global investors play a part in funding new companies?

Punting on the value of a privately held asset seems to be flavour of month in the decentralized finance world. The omicron token took off over the weekend simply because interest in the word increased. Doesn’t it make more sense (as if that matters) to instead focus one’s attention on the sentiment surrounding the potential for pre-IPO companies in China, that may never be available to trade overseas. Since it is a completely unregulated market, there is no threat from Chinese regulators and since no ownership is claimed there is no risk to data. Many people have wondered at what the point is of digital tokens. This would appear to be a use case designed for speculation rather than ownership. 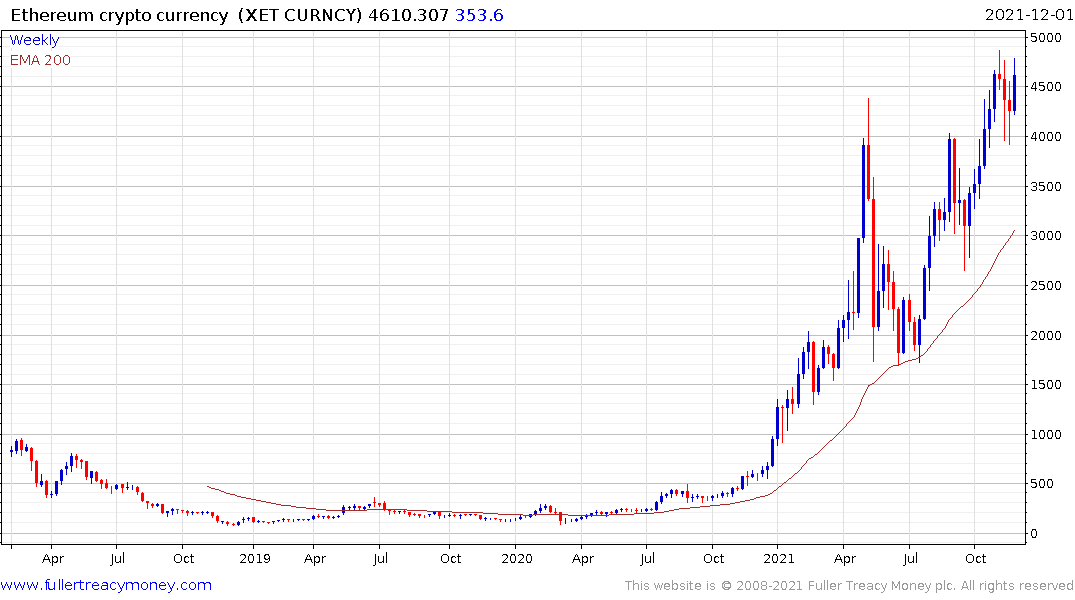 Ethereum continues to hold its relative strength compared to bitcoin and the ratio is testing the upper side of a seven-month range. 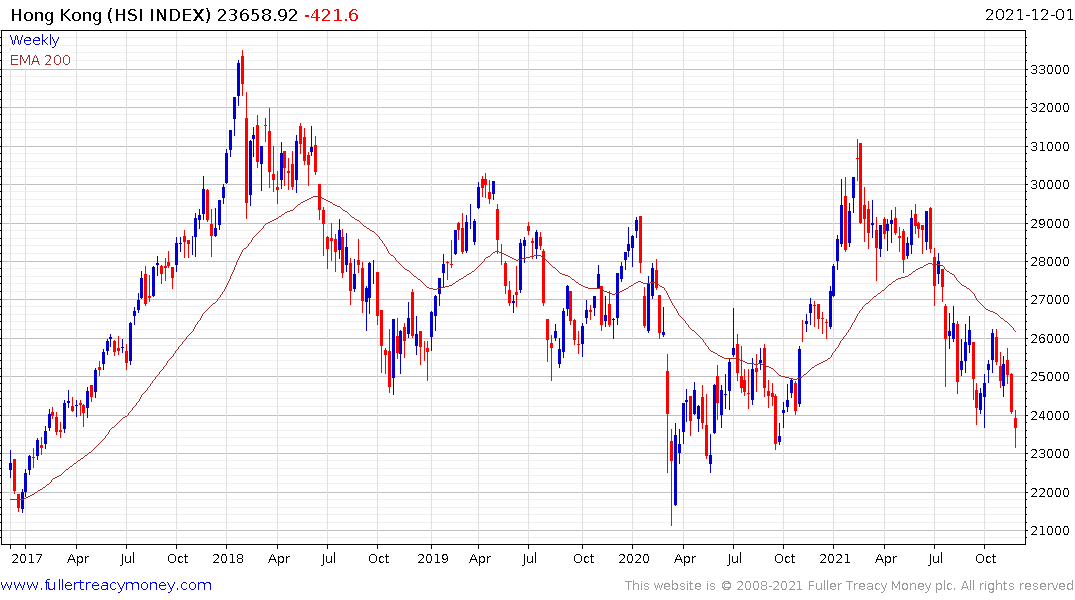 The Hang Seng steadied today but it has a lot of work to do if demand dominance is to be reasserted, despite the short-term oversold condition.