China’s property tax could be another casualty of the slump in the housing market, with analysts expecting the government to hold off on expanding trials of the levy because of a real estate-led economic slowdown.

In October last year, China’s parliament authorized the limited property tax in Shanghai and Chongqing be expanded to more cities, with some analysts forecasting that it could begin by the end of 2021. However, the rapid deterioration of the real-estate sector and the lack of any detailed implementation plan from the State Council is fanning speculation that the government is waiting for a market uptick before it starts the tax.

“Now may not be an appropriate time to launch the trials as the economy and the real-estate market are both under pressure,” said Liu Jianwen, a Peking University professor who is also the legal adviser to the Finance Ministry and legislative adviser to the standing committee of the National People’s Congress.

Although the nation’s top leaders are “very cautious” about it now, the trial won’t be shelved for a long time as officials are “very determined” to start it, Liu said last week.

China has been talking about rolling out a nationwide property tax to regulate the market and control soaring prices for over a decade, since before the trial began in Shanghai and Chongqing in 2011. Nothing has happened so far, likely due to opposition from home owners and developers who are afraid the levy would push prices lower.

Authorities returned to the land tax idea last year amid a broad effort led by President Xi Jinping to promote “common prosperity.” According to an October statement from the nation’s parliament, the tax is designed to guide rational property buying and will target all kinds of residential and non-residential properties in the trial areas except rural housing.

However, the rapid slowdown of the industry after the government’s crackdown on risky lending and other factors such as the announcement of the tax plan have now made it harder to actually start charging the levy. The government’s fine-tuning of some property curbs and support for mortgages haven’t been enough to halt the slide, according to analysts.

“These are just marginal policy easing and the regulatory tone of stabilizing home prices, land prices and market expectations is clear,” Bloomberg Intelligence analysts Kristy Hung and Lisa Zhou said last week. “It may be a better time to launch the property tax trials when the market is calm.”

One sign of a recovery in sentiment would be a halt to the decline in sales that began in July, Hung and Zhou said. Some analysts expect that could happen this year.

“The real estate market is expected to see signs of recovery in the first half of this year,” according to Xu Xiaole, chief market analyst at Beike Research Institute. “Transaction volumes will likely bottom out in the first quarter and home prices may stop falling in the second quarter.”

Another Chinese property developer, Shimao, filed for bankruptcy today and big questions are being asked about Guangzhou R&F’s sustainability as a going concern. Yuzhou yields on 2026 maturities are up to 65% so the long interval between thought and action by the Chinese authorities continues to take a toll on the privately-held portion of the property developer market. 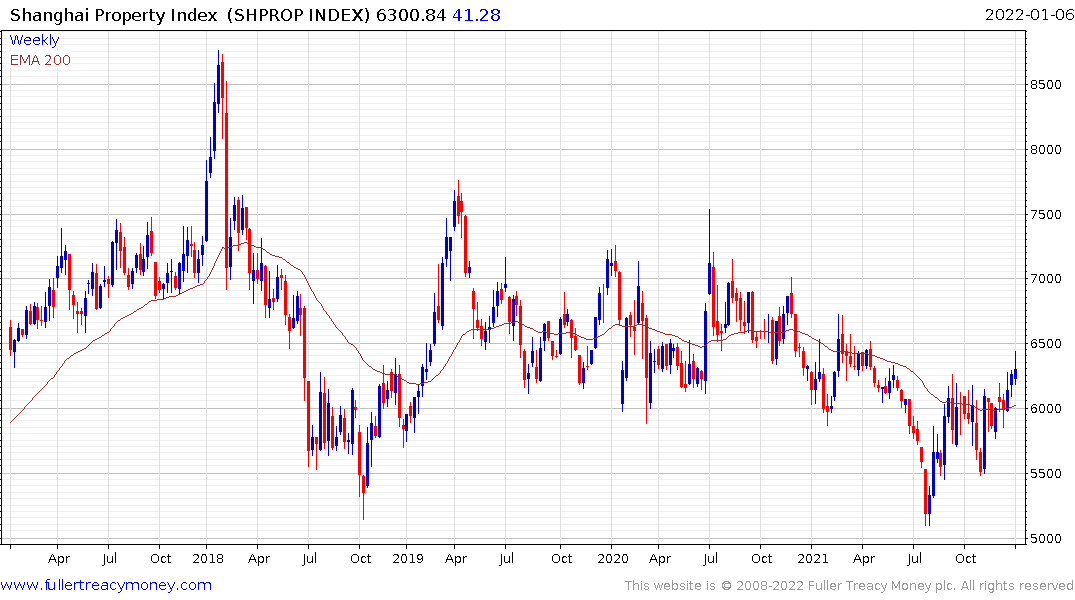 Meanwhile the predominately state-owned portion of the market, represented by the Shanghai Proprty Index is comparatively steady. That continues to point towards a de facto nationalisation of the Chinese property developers’ sector as the most likely means of putting a floor under the market. It’s a question of it, but when, additional assistance is provided. A property tax is the neatest solution but introducing one is fraught with uncertainty. Excising leverage from private developers and absorbing them into the state-owned apparatus is a more likely and manageable solution. 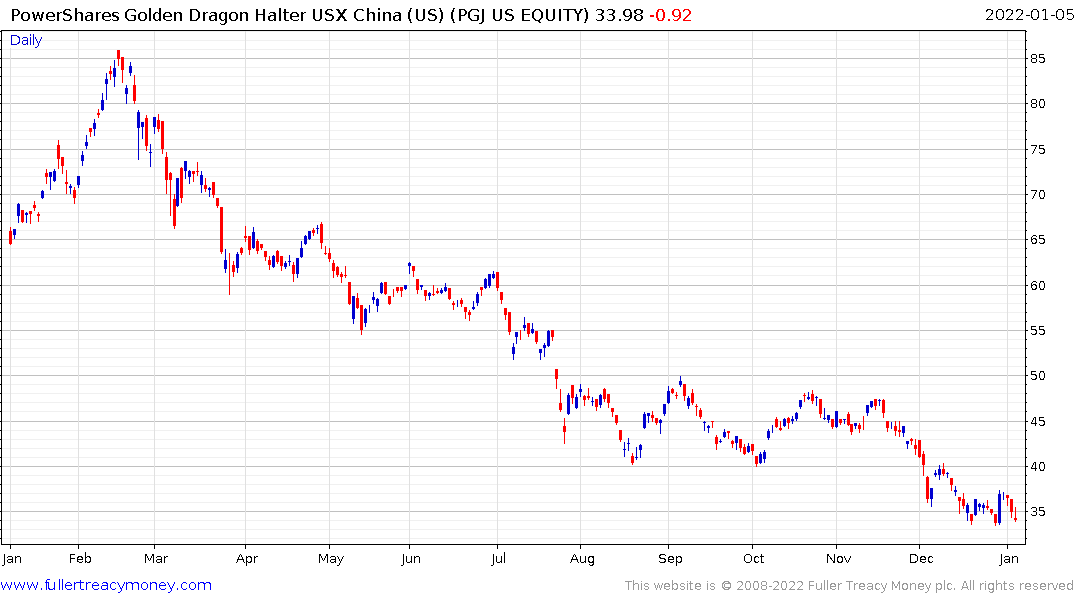 The Nasdaq Golden Dragon Index continues to steady in the region of the 2020 lows.