The signal of increasing urgency came just hours after purchasing manager reports showed an across-the-board deterioration that risks spilling into a broader drag on global growth. The world’s second largest economy is being damaged by its trade war with the U.S. and a domestic debt cleanup.

With those pressing constraints, officials have added modest policy support so far, ranging from tax cuts to regulatory relief, rather than repeating the fiscal firepower seen after a previous slowdown. Investors seem unpersuaded by the drip-feed approach with the yuan hovering around a decade low and stocks sliding.

“Accepting slower growth has long been a challenge for Beijing, but now the rate of slowdown is firmly out of the comfort zone,” said Katrina Ell, an economist at Moody’s Analytics in Sydney. “In recent years the balancing act has been addressing risks in the financial system against pressure to stabilize economic growth. It appears the latter is again more of a priority.”

Major rallies in Chinese mainland stocks tend to be state sponsored. It’s the Communist Party’s equivalent of a central bank put and it’s something investors have tended to wait for before committing to a rally.

The deleveraging process that has been underway is necessary considering how much leverage has been built up by the regional governments over the last decade and that process is far from complete. Here is a section from a report, kindly forwarded by a subscriber, discussing the recent changes to how social security contributions will be collected from companies:

Last, the reforms have raised concerns among businesses. Earlier this year, China conducted an institutional reform, which requires firms to pay social security expenses to the central tax office, instead of provincial and local agencies.

In the past it was common for Chinese businesses to calculate and pay social security fees based not on the actual salary of their employees, but on the minimum monthly salary set by local governments.

The practice, which is illegal, has been widely tolerated by local authorities. It is believed the latest reform will accompany more strict collection of social security fees, something already reported to be going on in some places.

This is another example of how the government is reining in the largesse that has been extended to the corporate sector. It is also representative of the way regional governments have been forgoing tax collection in favour of land sales and debt issuance which has contributed to the highly leveraged condition regional financials now find themselves in.

With the Fed Reserve continuing to raise rate, the ECB ending its QE program and Japan beginning to taper it is China where the greatest potential for additional liquidity to enter the market rests. If China does in fact embark on fiscal stimulus that would likely be a bullish catalyst both for its domestic stocks and the wider global market. 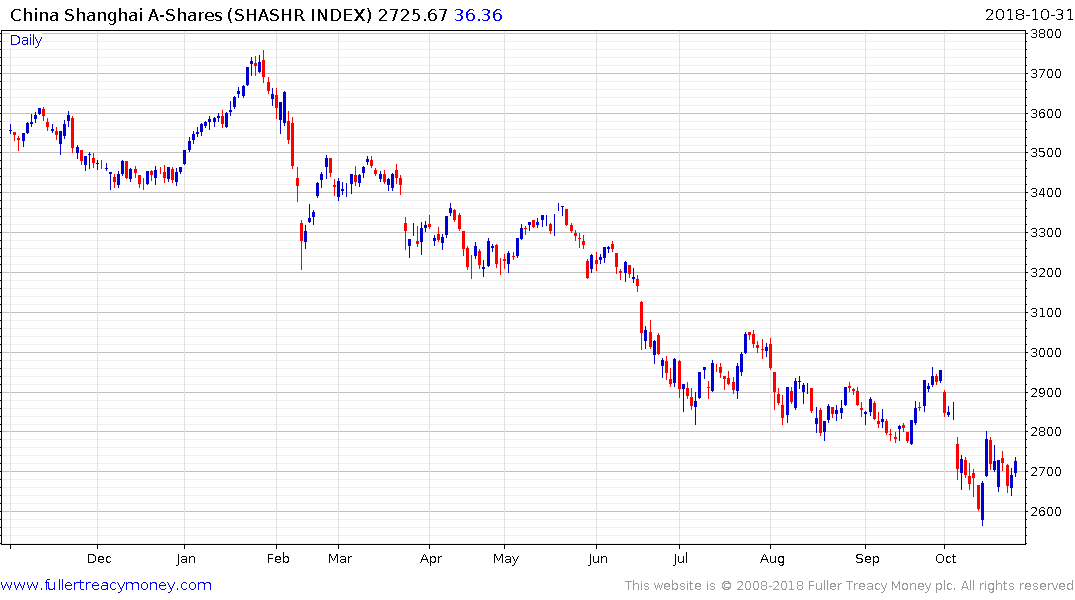 The Shanghai A-Share Index posted an upside key day reversal on October 19th and followed through on the upside the day after. It has paused over the last week but held the low near 2600. A push above 2700 would trigger a midpoint danger Line stop and question the consistency of the downtrend.