The widening gap between CPI and PPI “suggests an uneven recovery of the economy,” said Raymond Yeung, chief China economist at Australia & New Zealand Banking Group Ltd. “Despite the commodity boom, the service sector has yet to catch up.”

Wages are lagging and the central bank will likely keep its policy stance “largely neutral,” he said. The People’s Bank of China is seeking to scale back the stimulus it pumped into the economy during the pandemic last year, worried by the build up of debt. Economists expect policy makers to slow the pace of credit expansion rather than raise interest rates. The Communist Party’s Politburo, China’s top decision-making body, said last month there won’t be any sharp reversal of macroeconomic policies. China aims to keep consumer inflation at around 3% this year, but an NBS official said in a recent interview that the headline index is expected to be “significantly lower” than the official target in 2021.

China exported deflation to the world by producing goods at lower prices than anywhere else for years. The interconnectedness of the global economy means that if inflation does return as a trend, it will not only occur in one country but will be a global phenomenon. That suggests the world’s relationship with China and what happens inside China will have a strong bearing on the outlook for longer-term inflation.

China’s credit cycle is rolling over and the financial authorities are beginning to rein in stimulus. That stands in sharp contrast to what is occurring in the USA and Europe. China’s efforts to avoid a bubble are likely to be a moderating influence on global inflation.

China’s population growth is estimated to peak before 2025. That means the migration of low-end manufacturing will accelerate. The world needs a new large source of cheap young labour to take over from China. Right now, India is the best bet but it has plenty of competition. We might have a few years of acceleration but this trend has been underway for a decade already.

Governance is everything and that is particularly true as economies progress and grow. The greatest roadblocks to growth occur when innovation is stifled in deference to political ideals, whim or rent seeking. Against that background the government will be under even more pressure to support the higher end manufacturing and services portion of the economy.

The active measures underway to curtail the expansion of China’s most successful tech companies are a warning that the rewards from innovation are no longer open-ended. Quite how the spirit of limitless innovation can be fostered when there are clear limits on success is an unresolved quandary for central planners.

The one-child policy means China’s dependency ratio is much higher than might otherwise be that case. That’s also a moderating force on domestic inflation. At a minimum it implies more conservative spending patterns.

The thin margins of manufacturers mean they have no choice but to pass on commodity price rises to customers. That’s a knock-on effect from the surge in commodities prices. Commodities are volatile and prices jump around a lot, wage growth is permanent and has a much greater influence on inflationary pressures. If the trend of wage growth picks up in China that would be a red flag for global inflationary pressures.

Geopolitics are also likely to play a significant roll in future inflationary pressures. Globalisation worked because manufacturing was outsourced to China. The number of countries willing to sanction China for its actions in Xinjiang is growing swiftly. That implies more trade friction which is certainly inflationary.

The combined effect of the above trends points to near-term inflation but the number of moving parts makes the longer-term view more uncertain. Wage growth is the big missing ingredient for inflation to trend higher. 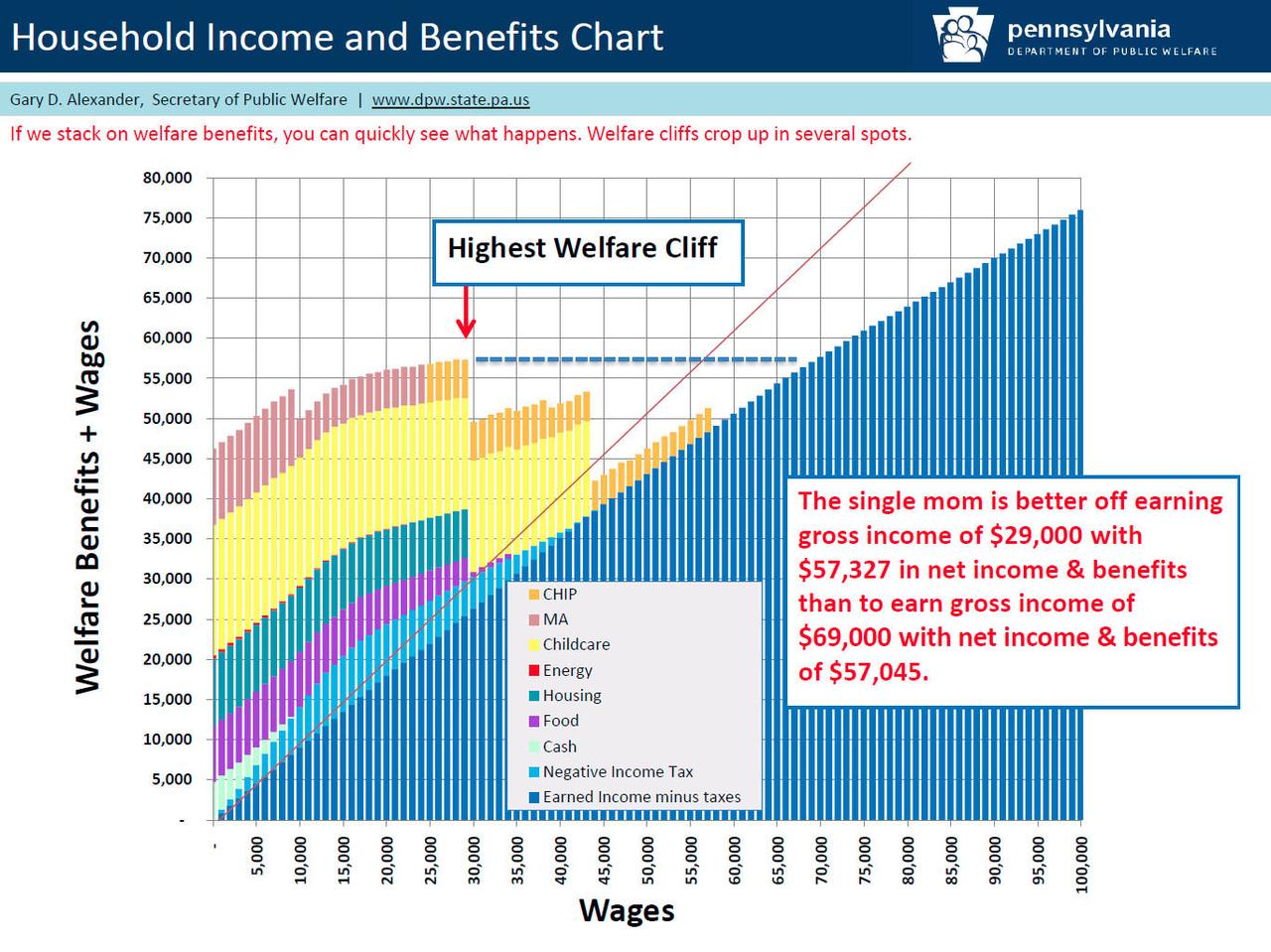 This chart from the Philadelphia Department of Public Welfare highlights the fact that a single mother earning $29000 a year receives almost the same amount again ($28,327) from welfare programs. If someone earned only $1000 more, they would be almost $10,000 worse off because of the loss of access to some welfare programs.

The additional welfare programs introduced during the pandemic are going to be extremely difficult to unwind. Once people get a taste of higher incomes, for doing nothing, they are going to protest loudly at the withdrawal of assistance. The end of the ban of evictions is also sitting on the horizon in a manner similar to a maturity wall for the bond markets. After the social unrest of 2020, it is unlikely politicians are going to have the appetite for stopping these programs. That’s the primary rationale for thinking the USA is where inflationary pressures are going to reappear first. 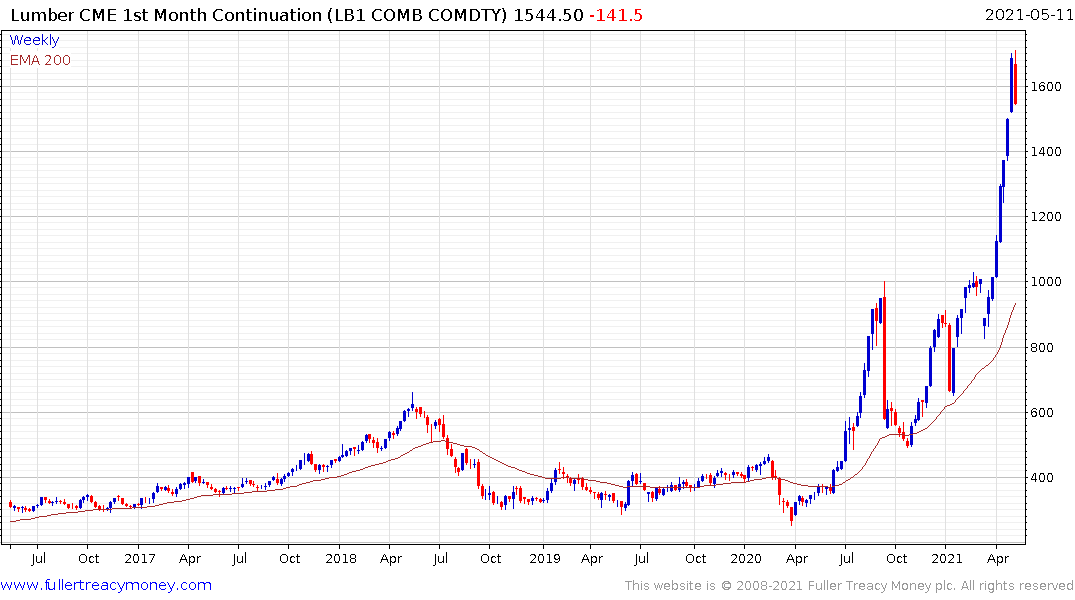 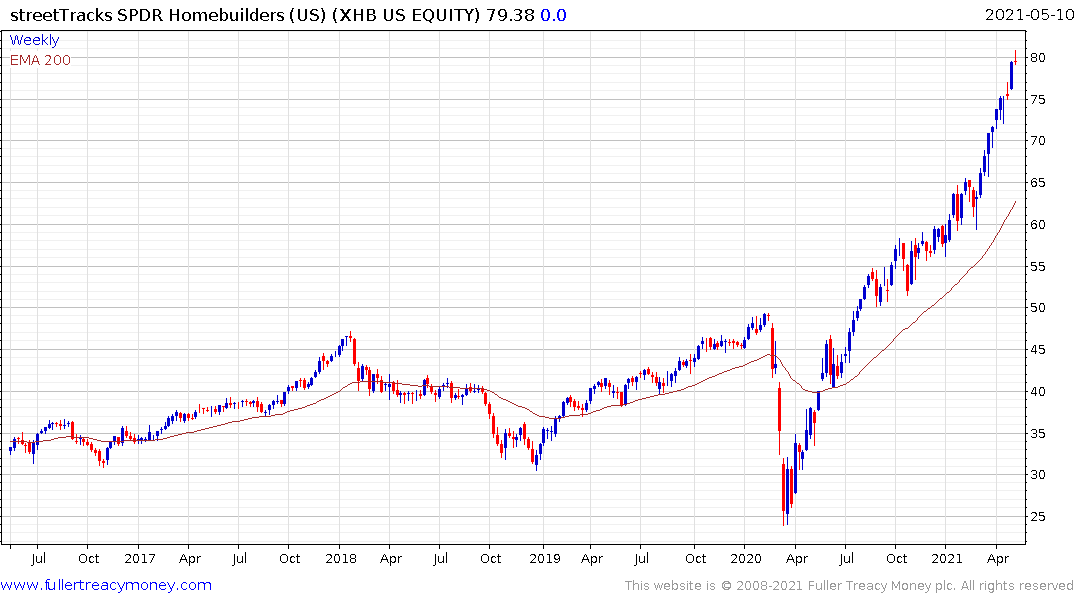 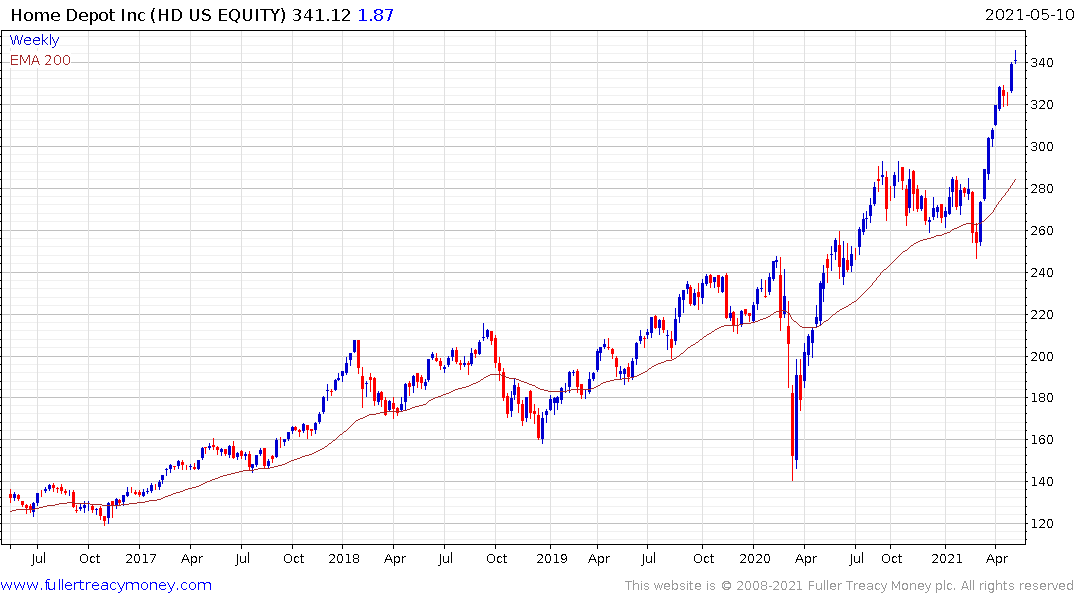 Meanwhile, lumber was limit down again today. That greatly increases the potential the peak is in. That is starting to weigh on home goods and housing companies.