3. Contribution to credit and financial stability: In 2013, the share of property loans (including mortgage loans and loans to developers) to total outstanding loans rose to 20% from 14% in 2005 (Figure 28). In terms of new loans, property loans accounted for an even higher portion, 26%, in 2013. In addition, we believe property developers are major borrowers in the shadow banking sector, although their actual exposure is unclear (see Q&A: Risks in China's trust sector, 28 January 2014).

China’s “ghost cities” made headlines over the last few years as examples of just how extensive bad planning decisions had contributed to overbuilding. Domestic investors took little heed of these examples because they were in remote areas and did not apply to major population centres such as Beijing, Shanghai and Shenzhen. However, the pace of building has picked up considerably since 2011 so that issues with oversupply have multiplied. As with any market, supply increases following major price advances can be considered late in the cycle developments.

Credit growth represents an important consideration. Let us draw parallels with the USA’s real estate bull market that peaked in 2007. The Fed’s response to the Nasdaq crash was to cut interest rates and boost liquidity. The concurrent advent of credit default swaps allowed banks to hedge exposure to bad loans and the subsequent bull market was fuelled by an unprecedented credit boom. This fuelled a building frenzy in residential real estate particularly in sunnier states.

China’s response to the global credit crisis was to embark on an incredibly large stimulus program which saw the pace of building accelerate from an already steep uptrend. Throughout this time, the Chinese government, through the banking sector, backstopped just about every loan, so that investors’ risk of default was negligible. That changed last month with the first default of a bond and more have followed. A significant quantity of debt is due to be rolled forward this year. Since we do not have a clear indication of what will be allowed to fail and what will be saved, we can logically expect credit conditions to tighten. This is not good news for the property sector. 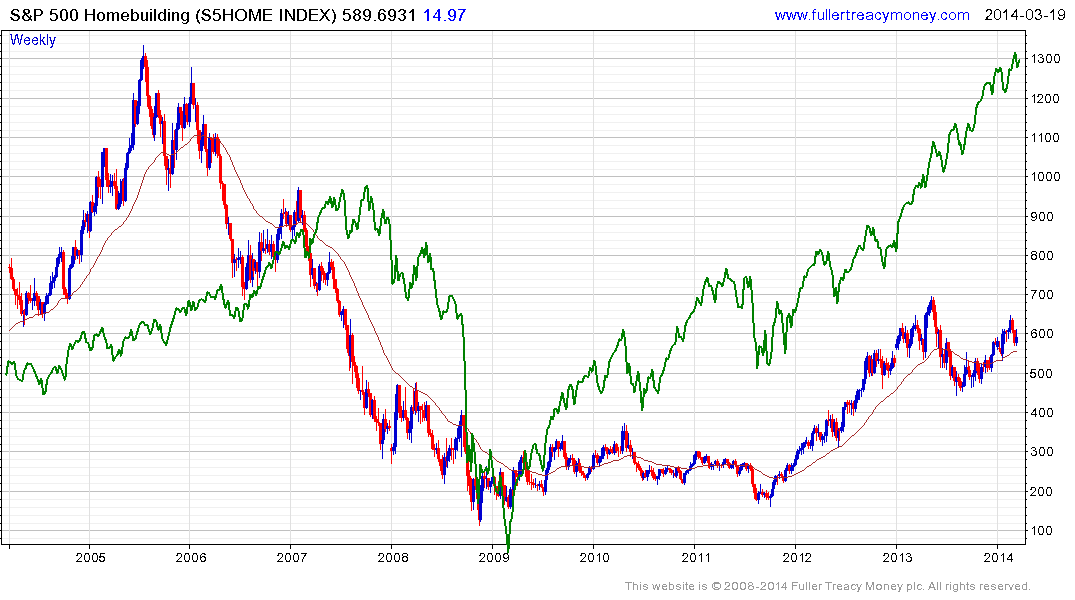 Generally speaking, the shares of property developers have already priced in a great deal of bad news. In another parallel the S&P500 Homebuilder Index peaked more than two years ahead of the wider market and bottomed approximately six months ahead of it. Assuming the Chinese property market is peaking, developers such as China Vanke will be worth watching for signs of early relative strength. 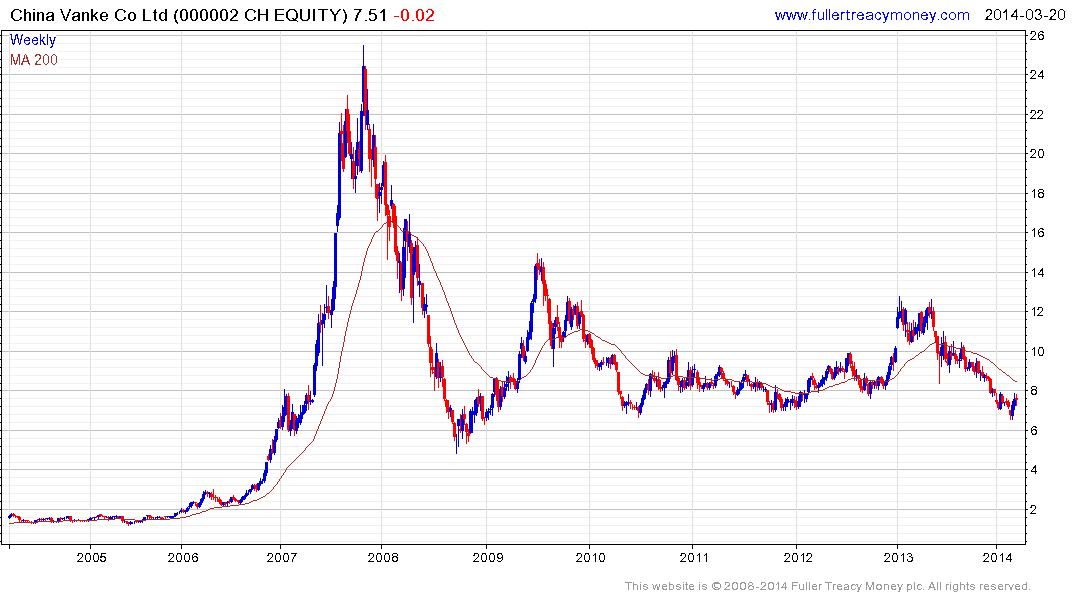 Following the Party Congress, a great deal of speculation has focused on what shape policy will take. It is generally better to watch what the government does rather than listen to prognostication. With that in mind, the weakness of the Yuan is particularly noteworthy. The decline from the January peak is the lengthiest and most pronounced period of weakness since the 1994 devaluation. China’s competitiveness has been hampered by a too strong currency for at least the last few years and efforts now appear to be underway to correct the situation. 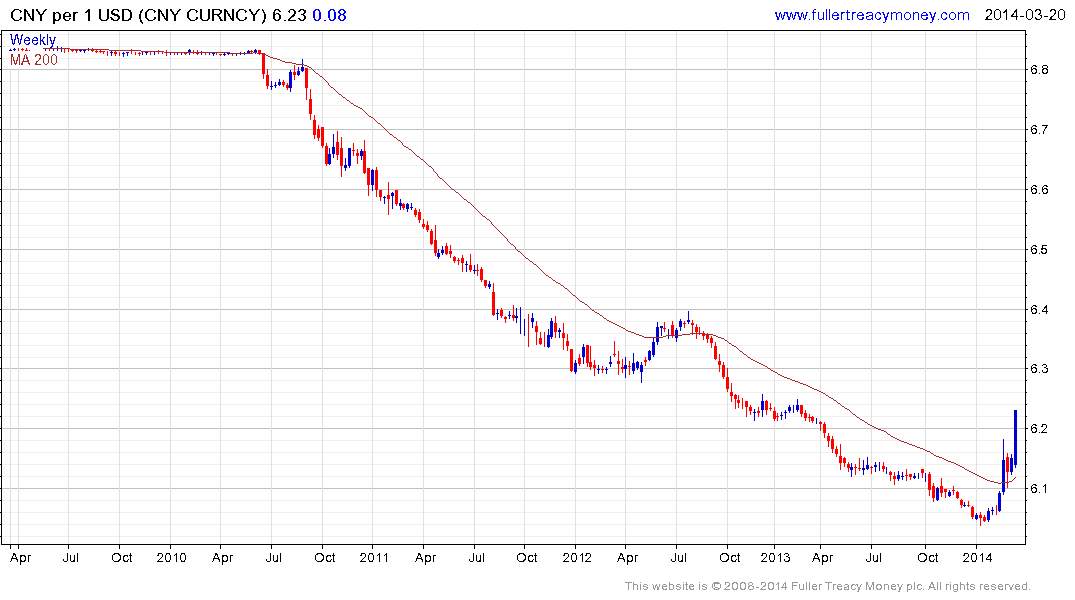 Chinese buyers have been widely reported to having built up considerable inventories of copper.  Prices fell to new three-year lows late last week, potentially signalling type-3 top formation completion as taught at The Chart Seminar. A break in the progression of lower rally highs will be required to signal demand is returning to dominance and to check potential for additional weakness. 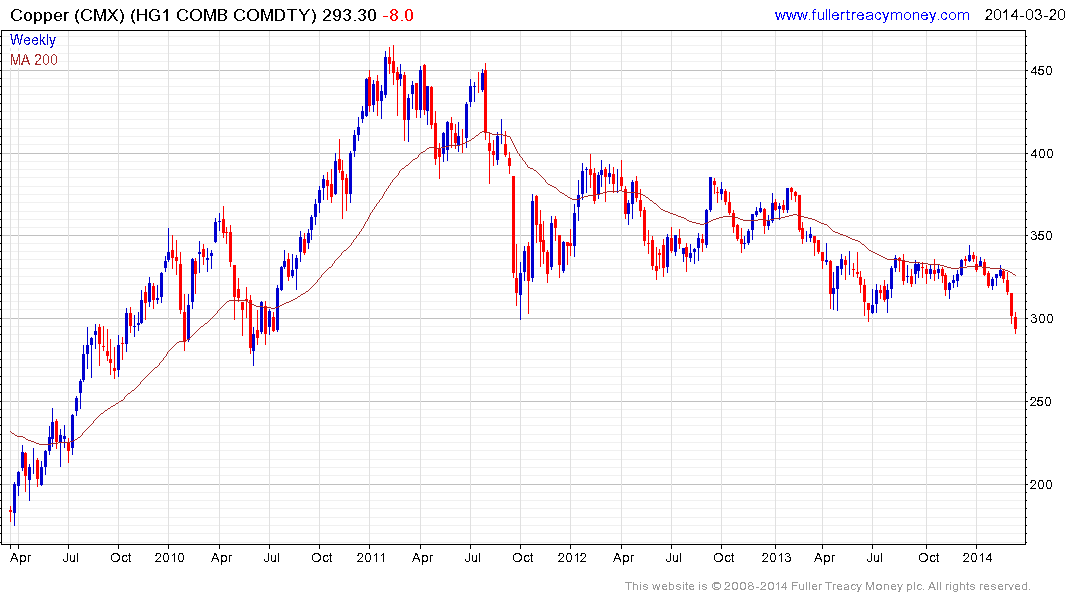 This article from Reuters highlights the fact that Chinese investors are increasingly offloading property positions in Hong Kong. Here is a section:

Cash-strapped Chinese are scrambling to sell their luxury homes in Hong Kong, and some are knocking up to a fifth off the price for a quick sale, as a liquidity crunch looms on the mainland.
Wealthy Chinese were blamed for pushing up property prices in the former British territory, where they accounted for 43 percent of new luxury home sales in the third quarter of 2012, before a tax hike on foreign buyers was announced.

The rush to sell coincides with a forecast 10 percent drop in property prices this year as the tax increase and rising borrowing costs cool demand. At the same time, credit conditions in China have tightened. Earlier this week, the looming bankruptcy of a Chinese property developer owing 3.5 billion yuan ($565.25 million) heightened concerns that financial risk was spreading.

Hong Kong residents will be aware that Li Kai Shing (Asia’s richest man) was liquidating his Chinese property portfolio last year and has been selling some of his Hong Kong interests more recently. Since he has such a good record of buying low and selling high his actions will have had an effect on sentiment.

Hong Kong isn’t the only city where Chinese buyers have been responsible for significant price appreciation. Vancouver and Sydney properties have been among the more high profile beneficiaries of speculative flows. At The Chart Seminar in Sydney last month, delegates highlighted that Chinese buyers could only purchase new builds. To avail of this market a significant number of apartment buildings had been built particularly with the Chinese buyer in mind. Generally speaking when the marginal buyer in a bull market runs into difficulties it can be considered to coincide with the latter stages of an advance.

This article by AustralianBankingFinance.com suggests Commonwealth Bank and ANZ have been most aggressive in growing their mortgage books over the last year. Here is a section:

Taking that a step further by looking at the level of each bank’s new funding as a percentage of its outstanding mortgage book, Westpac was only writing 16 per cent of its book in new funding per annum versus 21 per cent at National Australia Bank (NAB) and 25 per cent at CBA and ANZ. 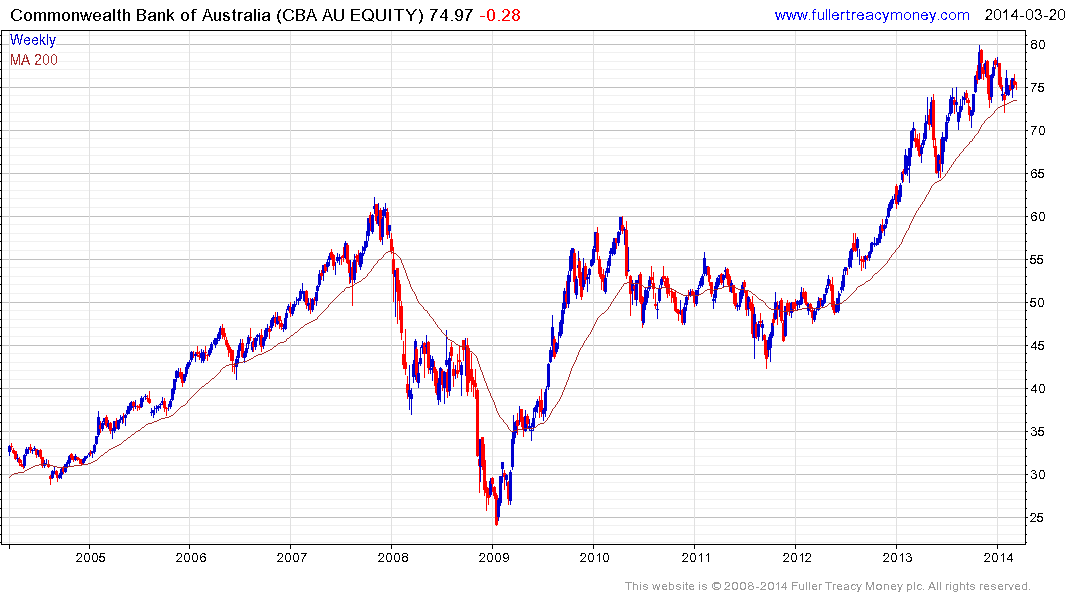 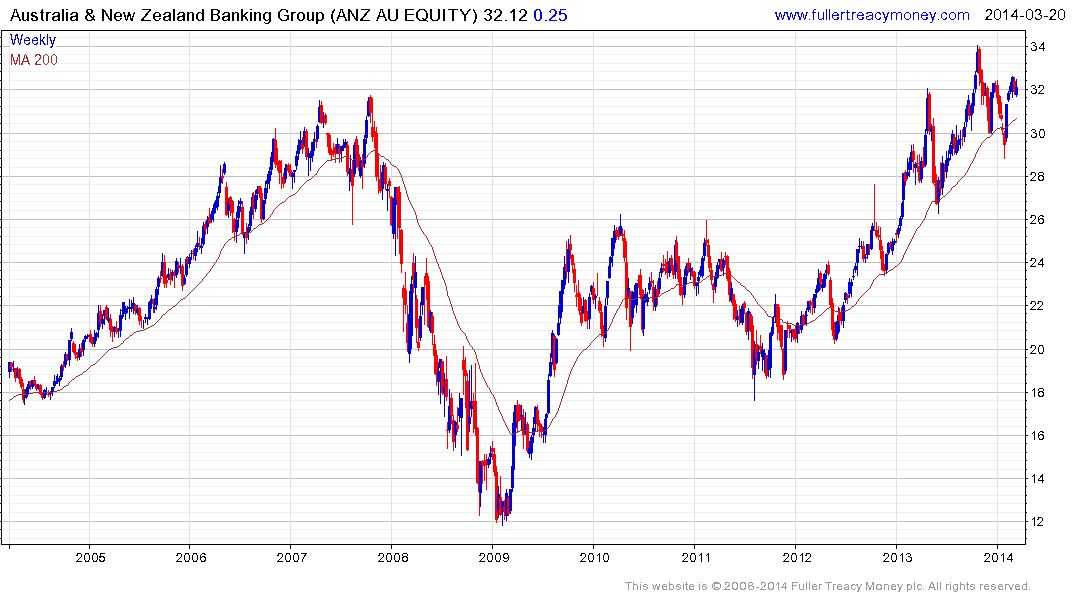 Their gross yields of more than 7% have helped propel them to their current heights but they will need to continue to hold above their respective 200-day MAs if potential for medium-term upside is to continue to be given the benefit of the doubt.