China's investments in research and innovation
Comment of the Day

China's investments in research and innovation by Eoin Treacy

Here are links to the first and second articles.

China was making headlines today because Xi Jinping’s bid to remain in power following the end of his official term was rubber stamped by the People’s Congress today. It has been a key object of Xi’s to do everything possible to ensure China sits on a level playing field with the USA on the international stage. Modernisation of the military, greater surveillance of the domestic population, strengthening the nation’s censorship of the internet, the Belt and Road infrastructure program, dominating international engagement with African countries, spending on research and development and infiltration of university campuses in the OECD are all part of that plan.

China like any other country has a vested interest in developing a domestic technology sector. That’s exactly the same objective countries like Japan, Taiwan, South Korea and Singapore pursued effectively and there is no reason China cannot do the same. In fact, when it comes to artificial intelligence it has a singular advantage. So much of the field depends on manually labelling millions of images and painstakingly teaching a computer program to recognize everyday items that having a large, comparatively cheap, tech savvy workforce is a major advantage.

Cheques are still commonplace in the USA while cash is increasingly hard to use in China. That’s a testament to the sticking power of financial infrastructure once it has been bought and paid for. Emerging markets therefore have a considerable advantage in skipping the introduction of legacy systems and can make considerable leaps in product roll out as a result.

China is educating hundreds of thousands of students overseas with the hope of encouraging many of them home to work in its domestic research sector. It will not have escaped the notice of any one reading the many technology blogs how many Chinese doctoral and post-doctoral students are involved in cutting edge research in the West. Therefore, it is only reasonable that if even a fraction of those people move home, then China will have the ability to do innovative research on its own. 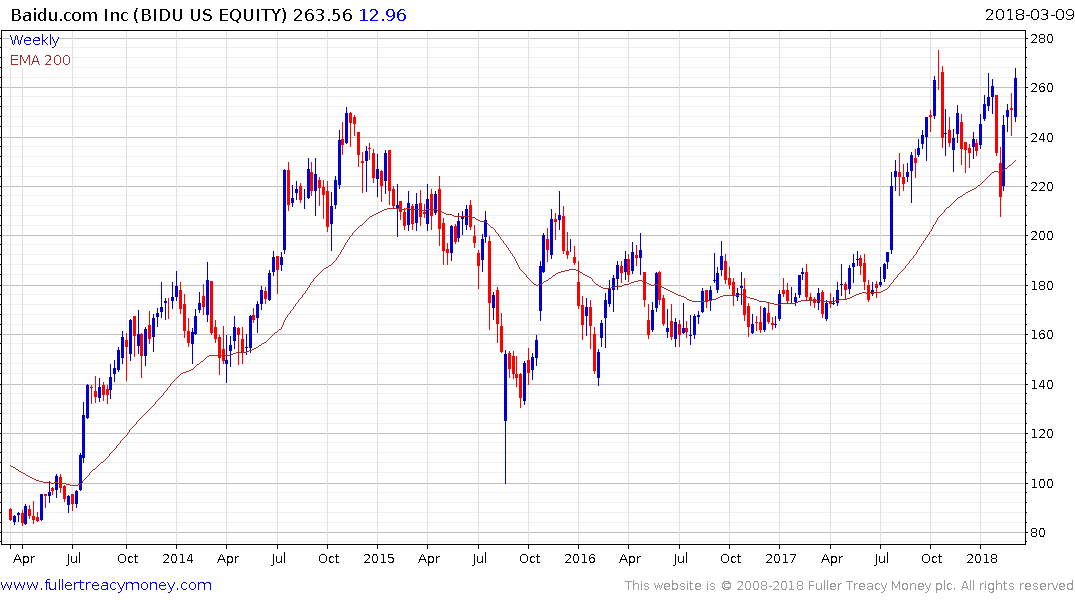 Baidu has been touted as the national champion in artificial intelligence not least because the Party has every intention of using whatever tools they come up with to exert greater control over the population. The share has rebounded from the early February low to test its peaks over the last month and some consolidation is looking likely. However, a sustained move below the trend mean would be required to question medium-term scope for continued upside.