There are “individual problems” in the real estate market, but the risks are controllable overall, Vice Premier Liu He said at the same event, according to the official Xinhua News Agency. Reasonable funding needs in the sector are being met, Liu was quoted as saying.

Some analysts expect the current real estate slump to be less harsh than previous ones because inventories remain relatively small. Developers have been more rational about building projects in coastal cities where demand is higher, said Chen Long, a partner at Beijing-based consultancy Plenum.

“The relatively low stock of unsold housing limits the risk of a major downturn,” Oxford Economics said in a note on Wednesday. “We think the most likely scenario is a contained short-term downturn.”

Still, any recovery will be difficult until home values resume rising.

“If property prices stop growing, we won’t buy,” said Jack, a tech worker in Shenzhen who didn’t want to be identified by his surname for fear of reprisals from his company. “Right now, I’ll sit and watch.”

The Federal Reserve is sensitive to equity prices because it is the most favoured asset class of US citizens. For the same reason the ECB is more concerned with bond prices than other asset classes. In China the vast majority of savers have some exposure to property prices so it is reasonable to ask how much pain can the government tolerate before they bend to market pressure?

This report from UBS may be of interest. Here is a section:

We've been underweight Chinese equities since summer 2020. A recovered economy and expensive market faced tighter monetary policy while the rest of the region offered better cyclical recovery prospects and more attractive valuations. 16 months on we reverse this call. Tighter policy is working through the economy, most notably in property. But we think this is now in the price and policy is already moving though it's tightest point. Relative earnings which have been very poor this year should bounce back in 2022, as cyclical upgrades in the rest of the region fade and weak earnings in Chinese internet stocks abate. Tao Wang and our China economic team's forecasts have Chinese growth troughing and improving sequentially from here; conversely, global growth is likely to slow progressively through 2022. Relative valuations have also reversed and should look better in 2022. Regulatory concerns are also overdone in our view, which is supported by our accompanying Q series. 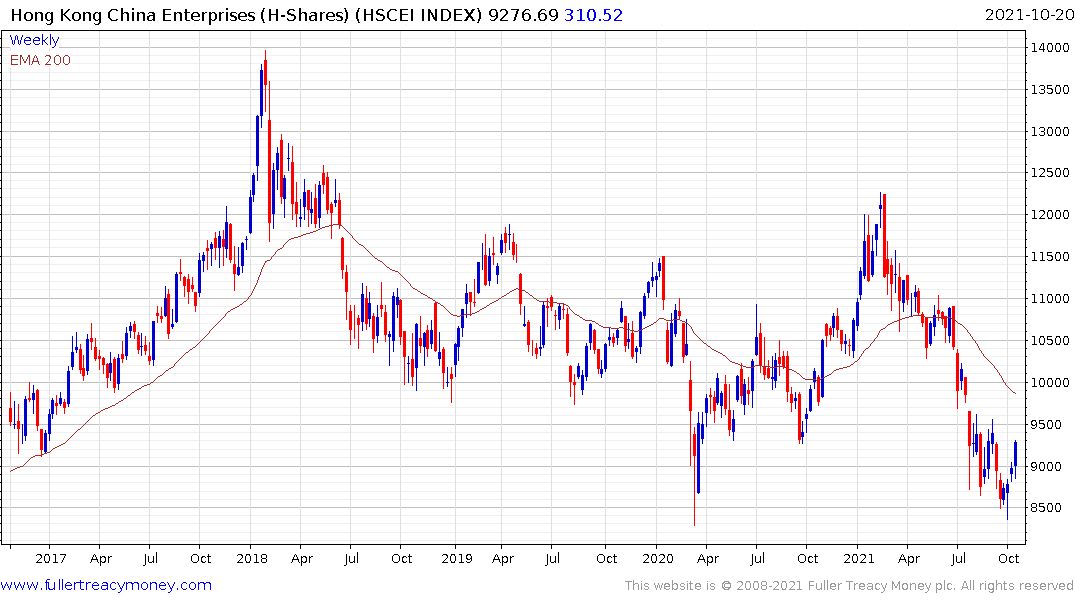 The Hang Seng China Enterprises Index is rebounding from the lower side of a decade-long range. The downtrend from the February peak has evolving Type-2 bottoming characteristics with a loss of momentum and failed downside breaks in place. A break back above 9500 will complete the formation and increase scope for a significant reversionary rally.

If we accept that stability is the byword for China’s administration then an unruly property market is a serious challenge. Measures to support the market has been paltry to date but that is not a sustainable strategy. The stock market is already pricing in the potential for a significant upswing in the credit impulse.