“Our research has found that China’s PPI has a high positive correlation with CPI in the U.S.,” said Raymond Yeung, chief economist for Greater China at Australia and New Zealand Banking Group Ltd. “The higher-than-expected PPI data could impact people’s judgment of inflation pressure in the U.S. and globally, and this impact shouldn’t be underestimated.”

Surging commodity prices have gained the attention of China’s top policy makers, with the Financial Stability and Development Committee -- chaired by Vice Premier Liu He -- calling this week for efforts to stabilize prices. Authorities should “keep a close eye on commodities prices,” the committee said in a statement Thursday evening.

“If inflation pressure starts to manifest in consumer prices, policy could begin to tighten,” he said.

China’s massive stimulus bailed out the world following the Global Financial Crisis. It also contributed to a significant credit expansion, a bubble in shadow banking and risked asset prices turning into the mania. They have spent much of the last decade attempting to unwind the over stimulus which has contributed to rising defaults, stricter lending criteria and more market controls. 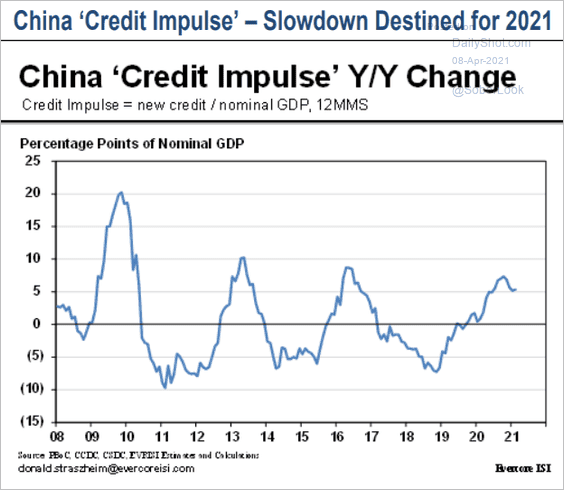 As the economy climbs out of another crisis, China is not about to overstimulate again. The coronavirus might have originated in China but the swift lockdown succeeded in mitigating much of the economic risk. Meanwhile, the domestic demand portion of the economy is now considerably more influential than it was in 2008/09.

China’s credit impulse is rolling over. That suggests they are already beginning to rein in speculation in the credit markets. With producer prices ramping higher that only increases potential for additional tightening.

Commodity prices are rising but it is not yet apparent whether that is a lagged effect of the pandemic and the damage done to the global supply chain or is it a more sustainable trend. The broader point is that Chinese wages are rising as the availability of young cheap workers dries up as the population ages. That’s not about to reverse anytime soon.

On this occasion it is the USA which is overstimulating and attempting to drag the global economy out of recession. That is fuelling asset price inflation in everything from food, energy, used vehicles and homes. That’s a medium-term trend.

The Federal Reserve is confident the effect will be transitory and that they have the tools to control inflation if it proves persistent. We should at least consider that the tools they are talking about are much higher interest rates, much tighter money supply and controls on credit. None of that is appetising for stocks with no earnings and high valuations.