The weakening of retail sales surprised analysts who were expecting a boost from the annual online “Singles Day” shopping festival. Spending in the restaurant and catering sector fell year-on-year in November, while car sales dropped for a fifth straight month.

China has been facing persistent outbreaks of the delta-variant and recorded its first cases of the more-contagious omicron variant this week, adding to pressure on authorities to implement local lockdowns.

What Bloomberg Economics Says...
China’s November activity data suggest the economy is still under strain, though the production side appears to be stabilizing. The pressure on the demand side was clear, with growth in both fixed-asset investment and retail sales extending slowdowns. We expect fiscal and monetary policies to become more supportive in the months ahead.

The central bank refrained from easing monetary policy on Wednesday. It kept the interest rate for one-year loans to banks unchanged and only rolled over about half of the maturing debts, withdrawing liquidity from the banking system. A recently announced cut to the reserve requirement ratio for banks takes effect from Wednesday, which should make it cheaper for them to extend new loans.

A weak labor market further worsened the outlook for consumer spending. The surveyed jobless rate inched up to 5% while the average number of hours worked per week fell slightly from the previous month.

The contrast between China and the rest of the world is growing increasingly stark. The demand surge during the pandemic has not yet ebbed in much of the rest of the world but is quickly receding in China. The key variable is liquidity. The USA and Europe spent inordinate sums to support their economies. China clamped down on personal freedoms and did what was necessary to ensure factories were operational, but did not engage in anywhere near the same level of monetary and fiscal accommodation.

That contributed to the trouble being experienced by the property sector. The determination of the administration to clamp down on overleverage pushed a rising number of developers into insolvency. The Party now appears to deem the property market a threat to the sustainability of the one-party system so they are clamping down on leverage. How sustainable this parsimonious approach to a sector in dire need of liquidity is debatable.

The result of this policy has been to heap further pressure on the CSI 300 Real Estate Index which is pulling back from the region of the trend mean as it distributes at the lower side of the six-year range. 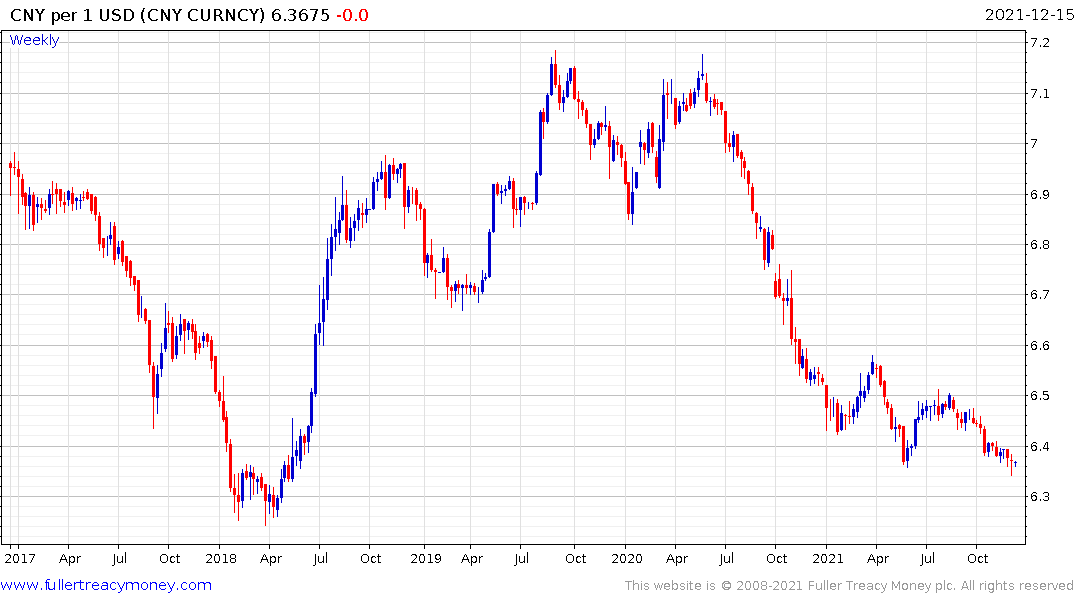 The Renminbi by contract has been a tower of strength amid low supply. The time to tighten up on overleveraged portions of the economy is expending in a robust manner. China’s growth is slowing and unemployment is rising. This seems an odd time to try and combat excesses in the property sector. Ultimately, they will need to devalue the currency and pump more money into the economy or risk a recession. That may not happen until next year so there is scope for a global liquidity crunch in the short-term as the Fed prepares to accelerate the pace of tapering.