China’s top leaders have kept their official deficit target below 3%, partly through belt-tightening, as a gesture to deter excessive borrowing as the nation fights debt on multiple fronts. Yet it has also given way to all types of off-balance sheet borrowing, a problem S&P Global Ratings said may re-emerge this year.

Signs of more proactive fiscal policy have already appeared. The Ministry of Finance allowed local governments to sell more than 1.8 trillion yuan ($258 billion) of debt before the annual budget has been approved. The ministry has also announced targeted tax cuts to help companies and households hit by the virus, partially waived social security premiums or delayed taxes.

​“Fiscal policy ought to be counter-cyclical, and the tension between revenue and expenditure shouldn’t be a reason to constrain it,” said Xu Gao, chief economist at BOCI Securities Ltd. in Beijing. “The government should increase the fiscal deficit to cope with the virus, and ease spending pressure by selling more debt.”

Economic activity in much of China has ground to a halt. Factories are struggling to get back to full capacity, where they can open at all, and consumer confidence has taken a significant hit so discretionary spending is cratering. That is particularly true in the leisure and travel sectors. There was news today that casinos in Macau are now allowed to open again but it will be a while before consumers have the confidence to go back. We were at lunch with another expat Asian couple yesterday and they are going to skip visiting Asia this year. That’s a pretty common reaction to the evolving scenario. Most people’s conclusion is why take the risk?

Similar risk awareness conditions are evident right across the region with workers being sent home and consumers deserting malls, theatres, hotels and restaurants in South Korea, Taiwan, Singapore and Japan. The hit to economic growth in the 1st quarter is going to be serious and will probably exceed the average estimates of economists.

That ensures there is going to be a fiscal response. How that is dressed up will take different forms depending on the political priorities of different countries but there is just no way that this kind of risk can be ignored. The parlous state of regional government finances in China and the knock-on effect of Japan’s VAT hike are all going to contribute to fiscal stimulus combining with monetary accommodation already in place across a host of countries. That is the primary reason stock markets have been so steady. Investors are betting on a large and prolonged stim that outlasts the short-term (3/4-month) slowdown. 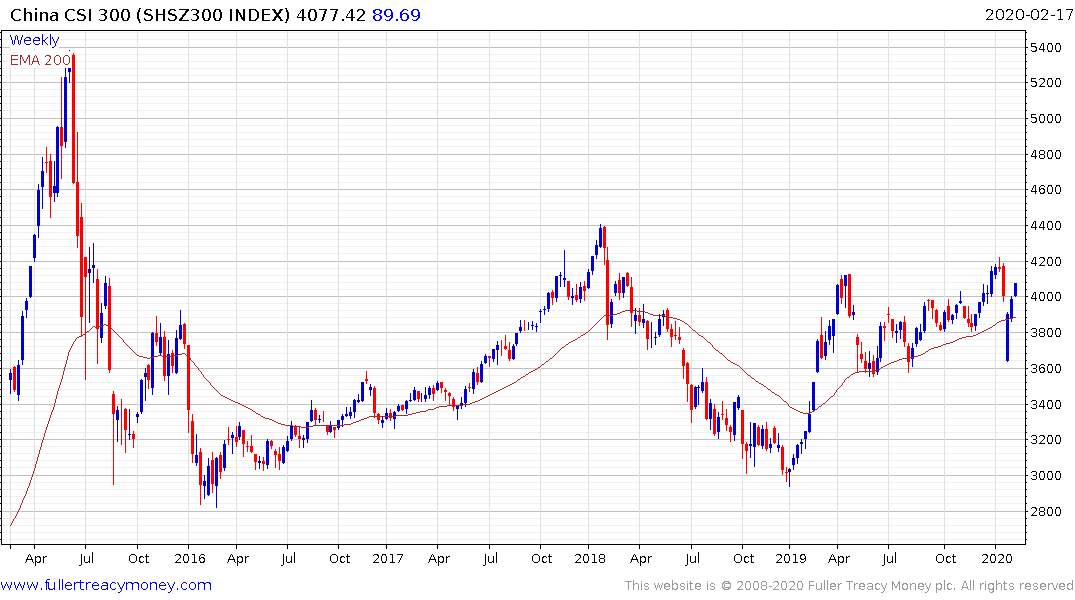 Chinese mainland investors are clearly emboldened by the relaxation of restrictions on credit creation and shadow banking, with the CSI 300 continuing to rebound. 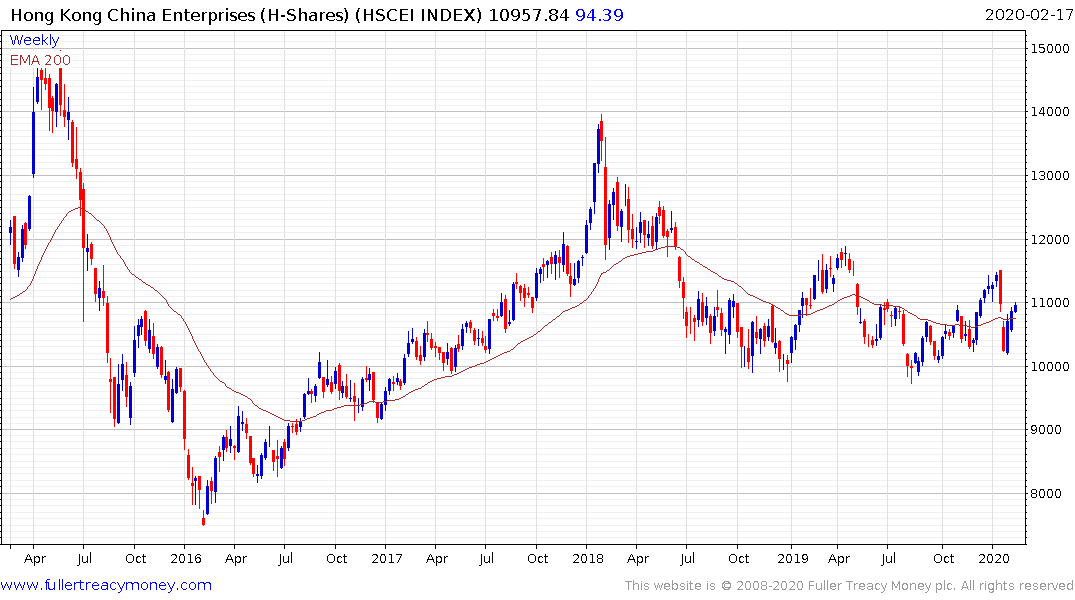 The H-Share Index is also continuing to rebound from the most recent test of the psychological 10,000 area.

This article from the BBC quoting the WTO supports the view that the extreme efforts to contain the virus’ spread are succeeding. The pace of infection is slowing down and that is supportive of the view that we will see a SARS-like V-shaped recovery. Here is a section:

Coronavirus cases are not rising dramatically outside China despite a spike in Hubei province, the World Health Organization (WHO) says.

The only exception was on a cruise liner docked in Japan, where 44 new cases were reported, bringing the total there to 218.

There was also no major shift in the coronavirus's pattern of mortality or severity, according to the WHO.