The central bank has added a total net 750 billion yuan via open market operations since Sept. 17. When onshore markets reopen on Oct. 8, 340 billion yuan of 14-day reverse repurchase agreements will fall due. Later in the month, 500 billion yuan of medium-term lending facility is set to expire.

Overnight interbank funding costs slid 43 basis points to 1.48%, the lowest since May, after the cash infusion. The seven-day repurchase rate, which covers the week-long break, rose 36 basis points to 2.55%, a level last reached at end-June.

The injection is also expected to allay fears of a contagion stemming from Evergrande’s debt problems. In a bid to contain the fallout from the property developer’s woes, China has stepped in to buy a stake in a struggling regional bank from Evergrande.

“The purpose of liquidity injection is mainly to give market confidence amid the Evergrande crisis,” said Tommy Ong, managing director for treasury and markets at DBS Hong Kong Ltd. “Having said that, there is still a possibility of a RRR cut in October due to a slowdown in economic activities caused by supply constraints and slower export growth.”

Speculation of an easing comes after recent data indicated that the pace of expansion in the world’s second-largest economy is slowing. A power crisis is adding to the strain and economists from Goldman Sachs Group Inc. are among those who have slashed their growth projections for this year.

China’s 10-year sovereign bond yield fell one basis point to 2.86% on Wednesday. It sank to a 14-month low after the PBOC unleashed 1 trillion yuan of liquidity into the system via a reduction in the RRR in July.

For China watchers, the big question over the last year was when would the credit cycle turn. It is looking increasingly likely that the China Evergrande default is the catalyst for additional infusions of liquidity that will likely last for at least the next year and potentially longer. 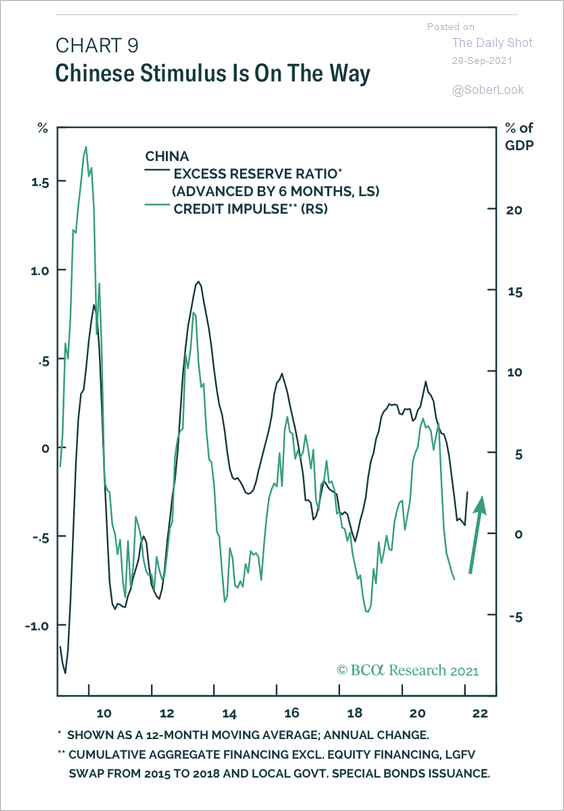 The credit impulse has tended to move in a multi-year wave where the government gets worried about ebullient behaviour in the credit markets and tightens until there is a serious risk of a rout. Then the cycle begins again.

Actions are underway to have state owned businesses acquire portions of China Evergrande’s portfolio. There is also evidence of foreign investors stepping in to buy the debt in the hope the recovery rate is above the current price of some bonds. That should help to reduce the potential for additional contagion.

There is also an increasing awareness of just how large China’s off balance sheet liabilities. Local governments financing vehicles (LGFV) might be against the law, but they have been the only way for local governments to fund themselves. Goldman Sachs today estimated them to be approximately half of GDP. That’s why the central bank’s admonition about other countries deploying quantitative easing is so humorous. The outstanding local government debt is as large as the sovereign debt and totally reliant on land sales for funding.

With challenges piling up from property to energy and economic output, the potential for substantial additional liquidity provision has to be the base case. 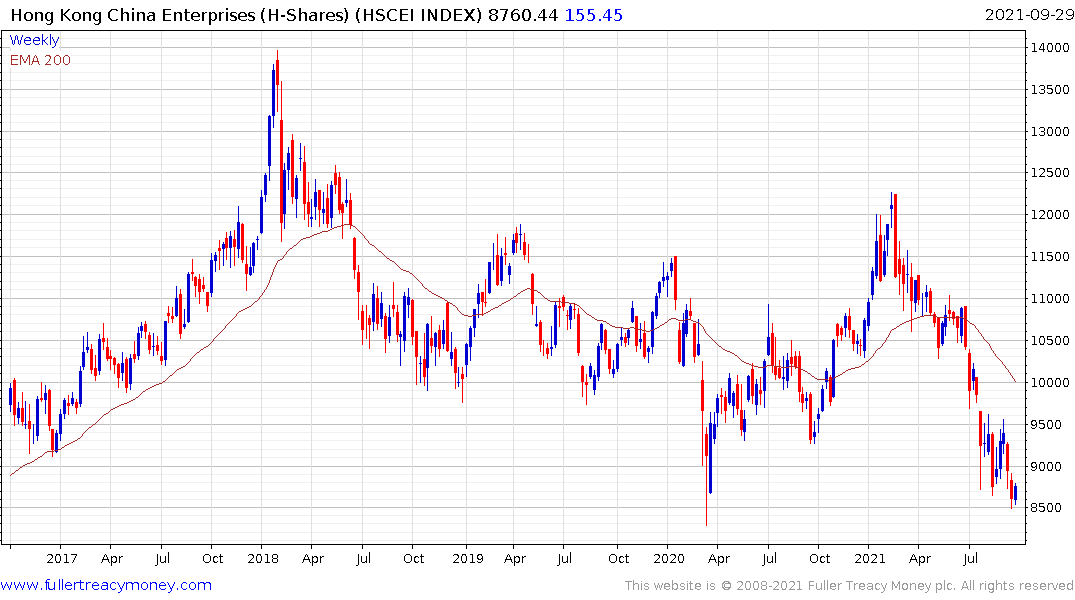 The Hang Seng China Enterprises Index (H-Shares) is currently steadying the region of the July and August lows and has ample scope for a reversionary rally.