From rural bank runs to surging consumer indebtedness and an unprecedented bond restructuring, mounting signs of financial stress in China are putting the nation’s policy makers to the test.

Xi Jinping’s government faces an increasingly difficult balancing act as it tries to support the world’s second-largest economy without encouraging moral hazard and reckless spending. While authorities have so far been reluctant to rescue troubled borrowers and ramp up stimulus, the costs of maintaining that stance are rising as defaults increase and China’s slowdown deepens.

Policy makers are attempting to do the “minimum necessary to keep the economy on the rails,” Andrew Tilton, chief Asia-Pacific economist at Goldman Sachs Group Inc., said in a Bloomberg TV interview.

Among China’s most vexing challenges is the deteriorating health of smaller lenders and regional state-owned companies, whose financial linkages risk triggering a downward spiral without support from Beijing. A landmark debt recast proposed this week by Tewoo Group, a state-owned commodities trader, has raised concerns about more financial turbulence in its home city of Tianjin.

Concerns have popped up across the country in recent months, often centered around smaller banks. Confidence in these institutions has waned since May, when regulators seized control of a lender in Inner Mongolia and imposed losses on some creditors. Authorities have since intervened to quell at least two bank runs and orchestrated bailouts for two other lenders.

Two years ago China’s central banks Zhou Xiaochuan gave a speech where he talked about the risk of a Minsky Moment and what could be done to avoid it. A Minsky Moment is when asset prices experience a sharp reversal following a long and prolonged advance. That kind of risk evolves from deploying procyclical policies for a prolonged period.

China’s administration took his warnings seriously and in the last two years there have been increasingly vocal warnings that the public needs to brace for difficult times ahead and not to expect continued supports. At the same time, access to credit has been curtailed in the nonbank lending sector and the administration has been reluctant to lean on the traditional levers of assistance such as infrastructure and property development. That newfound fiscal and monetary probity is one of the primary reasons China’s growth is undershooting. It is a significant gamble whether they can avoid a hard landing by following this program but it bets the almost surety of a bust bubble had they not attempted a deleveraging. 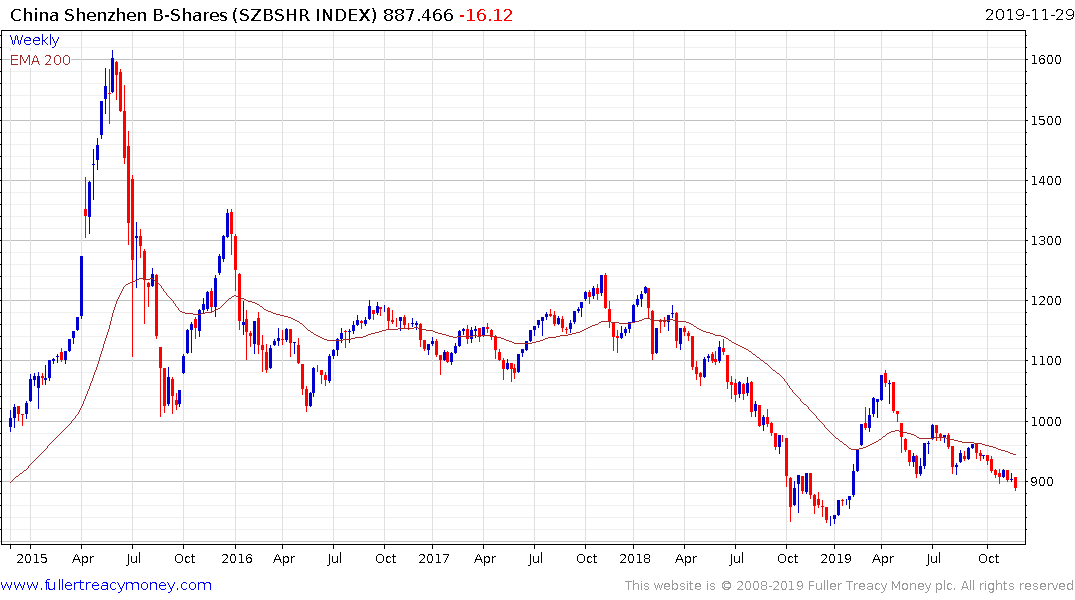 The Shenzhen B-Shares Index broke downwards yesterday and extended the decline today. A clear and sustained upward dynamic will be required to question the downward bias. 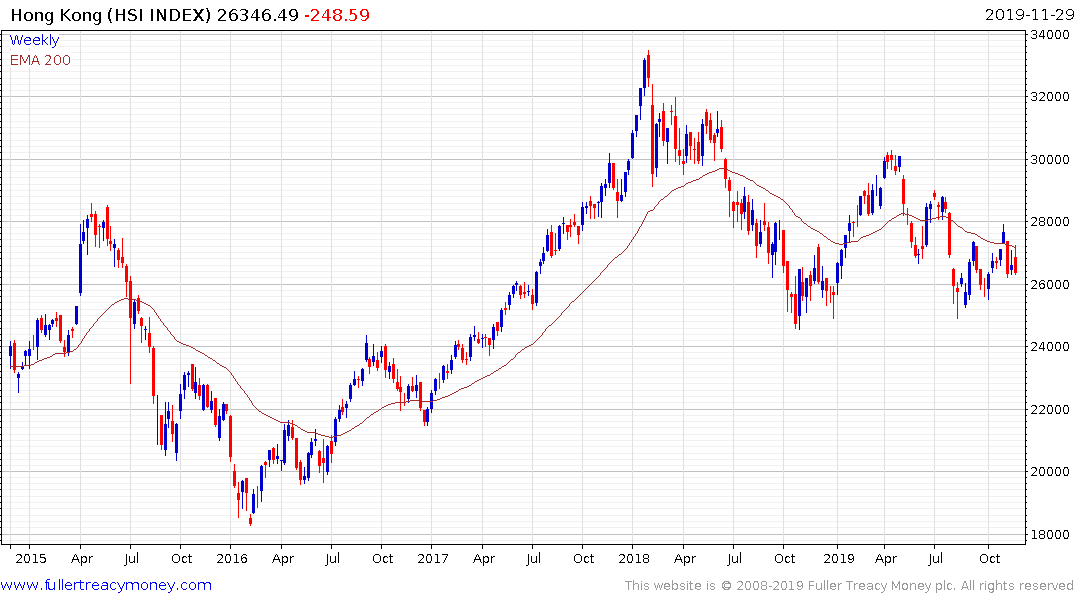 The Hang Seng Index pulled back today to test its November low. It confirmed resistance in the region of the trend mean earlier this month and needs to hold the psychological 25,000 level to confirm support building.