China Defaults Hit Record in 2018. 2019 Pace Is Triple That
Comment of the Day

China Defaults Hit Record in 2018. 2019 Pace Is Triple That by Eoin Treacy

China continues to press banks to extend credit to the private sector, and small and medium-sized companies especially. The latest move came Monday, when the central bank loosened some reserve-requirement rules for lenders. But President Xi Jinping’s team has also focused on shrinking the shadow-banking system, where credit decisions were made with less regulatory oversight and where it was easier to build up unsustainable leverage.

​It’s that funding squeeze that explains the default surge that began in late 2017 and continues today. By contrast, 2016 was more a story of China’s push to shrink excess industrial capacity having reverberating effects in credit markets. “Short bond tenors mean the companies need to refinance frequently,” and weaker ones will likely have difficulty, analysts including Hong Kong-based Nino Siu at Moody’s Investors Service wrote in a note last month. “Banks are reluctant to lend to weaker companies. Additionally, shadow banking, on which weaker Chinese companies rely, continues to contract as the government tightens regulation,” she and her colleagues wrote.

One of the companies listed in the above article is Neoglory. I visited their headquarters in Yiwu about seven years ago. Mrs. Treacy had a tourist focused store at the time and was sourcing costume jewellery. Neoglory was the largest, splashiest company around and was one of our first calls. We never purchased from them because when it came to negotiating prices, they had a complex web of discounts and promotions. When we questioned the accuracy of a salesman’s calculation he said “that’s how I do math”. At that point we walked. That phrase has passed “that’s how I do math” is something we still smile about. It looks like we were not the only ones to walk away from the company.

The much bigger issue with China’s debt markets is we do not know what the natural default rate is. No one does. That is a major uncertainty and might be considered a known unknowable. The efforts underway to provide additional liquidity to the private sector are a vital set of policies against a background where weak companies are being allowed to default.

In a market of $13 trillion renminbi ($1.91 trillion) a $22 billion default annual rate spread is low at 1,15% but it can be expected to continue to grow aggressively for the foreseeable future. There are a lot of companies that only exist because of the munificence of the Party and how many are to be saved is an open question. The default rate in the USA is somewhere around 8% in a crisis. For a market where there is been a long-term trend of misallocation of capital is it to be expected China’s default rate will be higher than $200 billion.

That’s still a manageable figure which is why the government is so active in curtailing shadow banking practices now rather than later.

The Solactive USD China Corporate High Yield Index is somewhat overextended in the short-term but a sustained move below the trend mean would be required to question the upward bias. 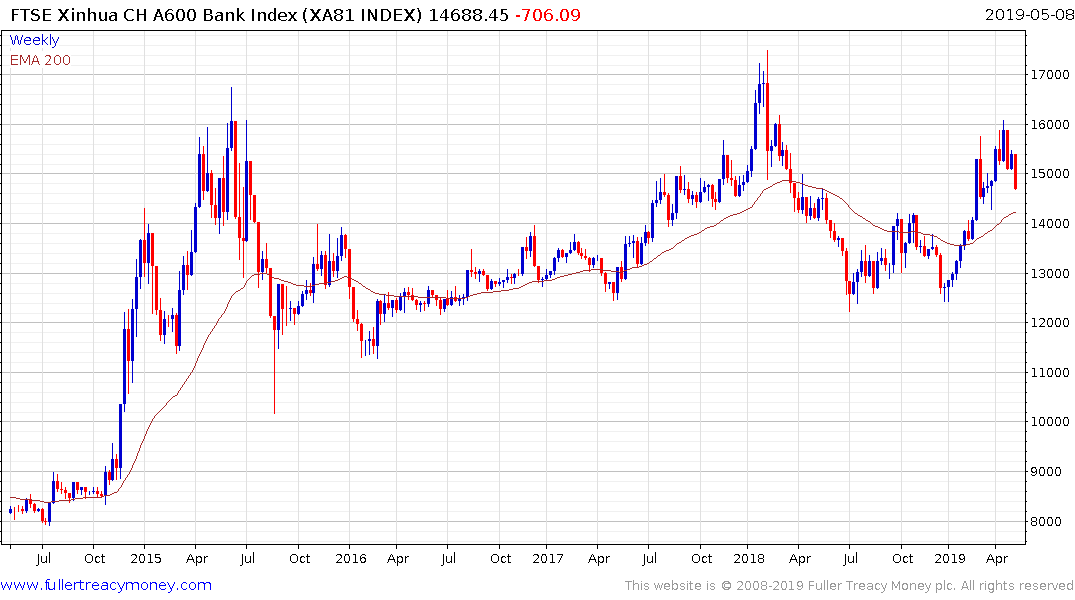 The FTSE/Xinhua A600 Banks Index continues to unwind its overextension relative to the trend mean but a sustained move below 14000 would be required to signal more than consolidation is underway.