The first principle of attempting to solve the China riddle is to assume nothing is ever as simple as it seems. Rather than focus on what the government or official statistics say, the only way to interpret the future is to monitor real world actions.

In the last few months, the Chinese government has neutered the domestic blockchain industry. It has gone from being the primary mining location for bitcoin to banning mining. The rationale used was because of the environmental toll bitcoin mining has because of its reliance on electricity that is often sourced from coal fired power stations. That’s despite the fact that many miners were located next to hydroelectric dams.

The alternative interpretation is the government wants to ensure there are even fewer ways to enable capital flight. Pioneering a domestic digital currency is an additional way to control fungibility of the payments process. Strengthening capital controls are not the hallmark of a self-confident regime. 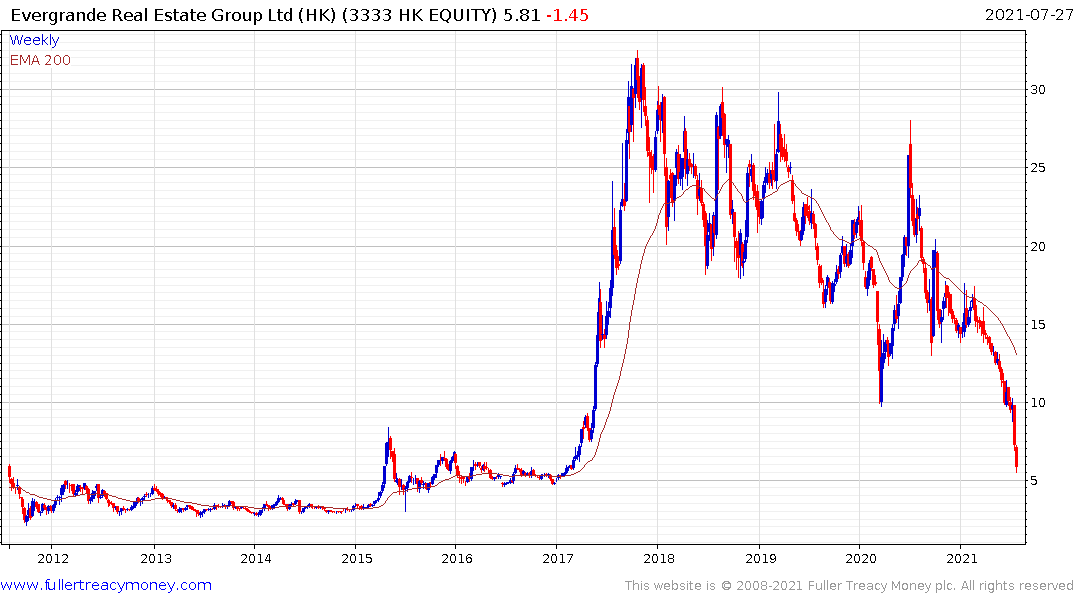 The yield on China Evergrande’s 8.25% 03/2023 bonds is currently 108% and the share continues to trend lower. China began to allow defaults a few years ago and the number of companies allowed to fail has been ramping higher. The challenge for the emerging market bond sector is Evergrande is its largest issuer. The result is most funds tracking the benchmark hold the bonds. 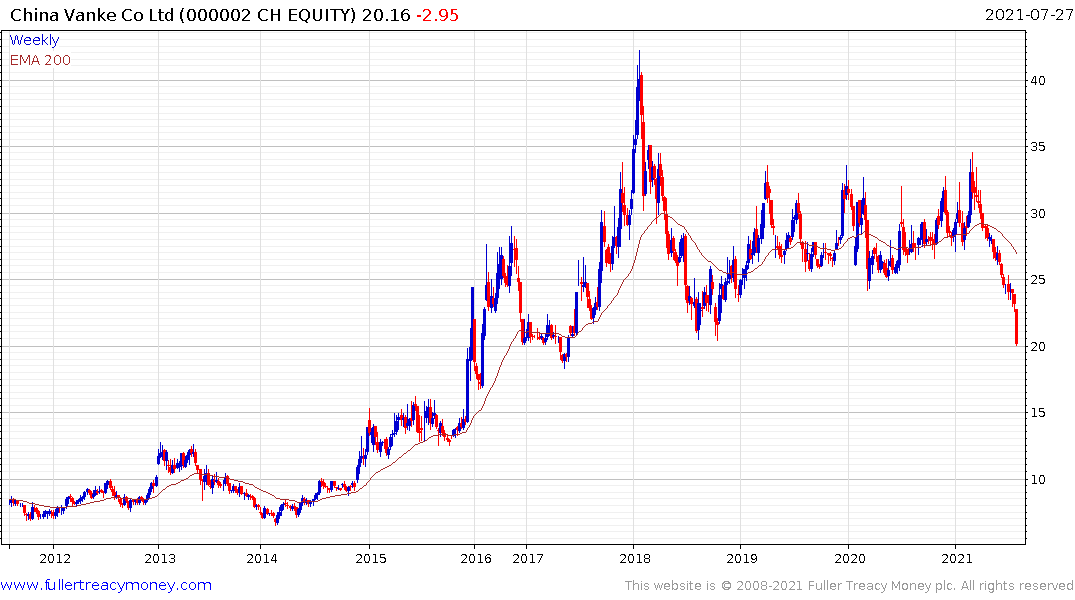 China Evergrande is a property developer and is pulling down the whole property sector. China Vanke, the largest stock in the sector, accelerated lower this week and is now testing the 2018 lows. A clear upward dynamic will be required to check momentum beyond a pause.

Chinese property prices in 3rd tier cities have more than doubled since 2014. These are cities most foreigners have never heard of. At CNY 16892/sqm that is a fraction of the official tier 1 price of 50875/sqm. Restrictions on trading property in large cities resulted in leakage of liquidity into smaller cities which fueled their boom over the last three years.

In the USA monetary authorities monitor the stock market, in Europe the focus is on bonds. In China the property market is where the vast majority of people have stored excess savings.

There is no evidence of stress in property prices yet, but the difficulties experienced by property developers are nontrivial. Chinese corporates came from nowhere to become the largest US Dollar borrowers because the supply of credit to the property sector was choked off during the shadow banking purge. They have constant requirements to replenish capital and the range of options open to them is now very narrow.

China kept foreigners out of its financial system for decades but opened up the sector in the last couple of years. The first rule of insurance is to diversify the risk. That’s what they have done by allowing foreigners into the banking sector. That ensures a domestic financial crisis becomes everyone’s problem and not just a Chinese one.

Efforts to clamp down on every possible public forum, whether in the real world or online, together with increasingly stringent social engineering and “reeducation camps”, point to a regime worried about the potentially negative effects of a deflating property bubble.

This has been a developing risk for years and has not resulted in a crisis. Therefore the big question is whether foreign investors pulling assets out, in response to the war on private enterprise, will represent a negative catalyst for the whole economy?

The world appears to be awash in liquidity but access is unevenly distributed. The evolution of China’s markets is likely to be relevant to the whole global economy however.