Iron Ore
While the state-linked Global Times earlier this year raised the possibility that Australian iron ore supply could be targeted, it’s likely to be low on the list of possibilities. The country dominates China’s iron ore supply, accounting for more than 60% of its imports, with next-biggest supplier Brazil making up less than 20% so far this year.​
​
In fact, the trade is booming, with China importing a record amount of Australian iron ore in July. Still, investors will keep a close eye on any sign of tensions spilling over as even small moves to restrict the movement of Australia’s most valuable commodity -- worth about A$100 billion this fiscal year -- would send a powerful signal.

LNG
Australia has accounted for just less than half of China’s liquefied natural gas imports this year. The proportion has grown in recent years as new Australian projects came online, including two in Queensland in which Chinese oil majors are partners.

Those partnerships, along with long-term contracts that obligate Chinese buyers to purchase millions of tons of LNG a year from Australia well into the 2030s, make the trade flow a
more complicated candidate for disruption.

China’s demand for commodities is likely to remain robust for the foreseeable future but that will not deter the administration from using resources as a bargaining chip in trade talks. The reality, however, is rising living standards create demand growth for products and services. If China is going to succeed in its aims of creating a modestly wealthy society for its billion plus people that is going to entail continued imports. Obviously, it is more dependent on imports for some commodities than others. 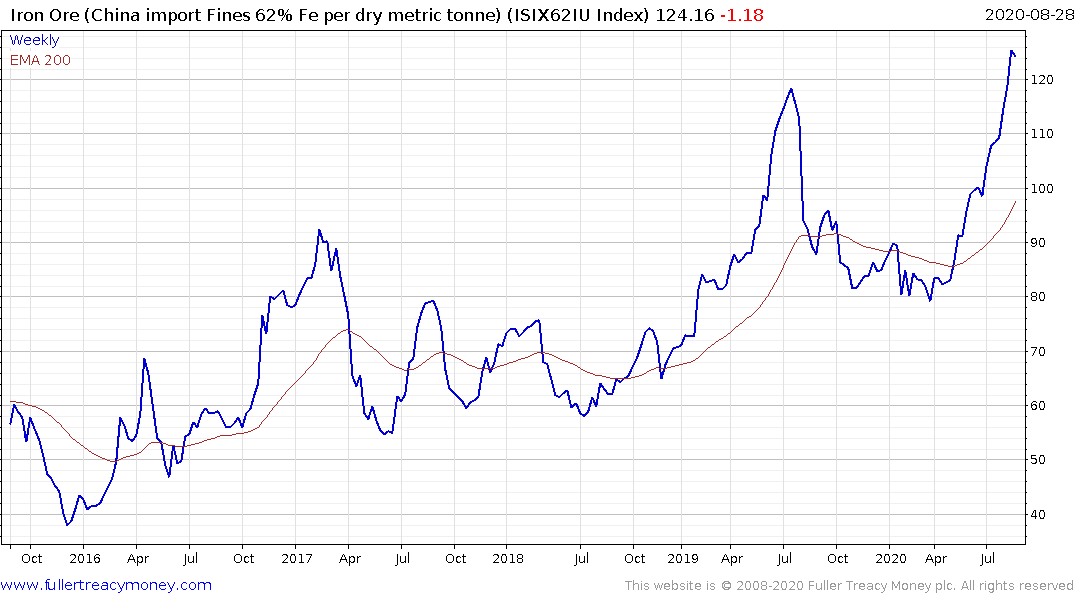 The run up in iron-ore, copper and nickel prices begs the question whether demand has really returned to pre-pandemic levels or is China building a strategic stockpile? The latter option would suggest they expect to exert additional pressure on countries like Australia for opposing their actions in Hong Kong and elsewhere. 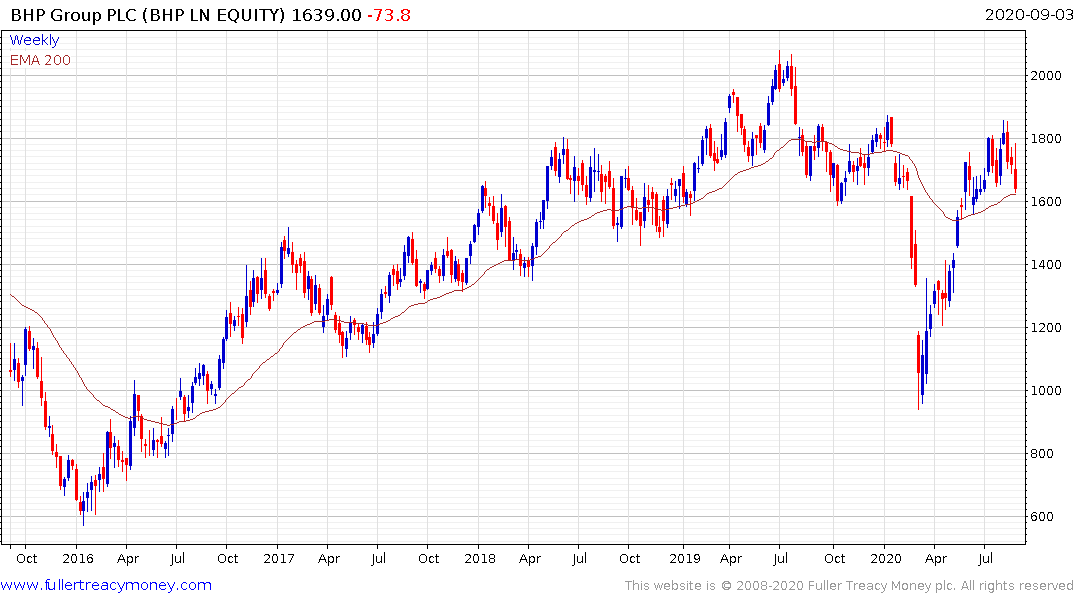 BHP pulled back sharply today in sympathy with the wider market and will need to hold the region of the trend mean near 1600p if the recovery is to continue to be given the benefit of the doubt. 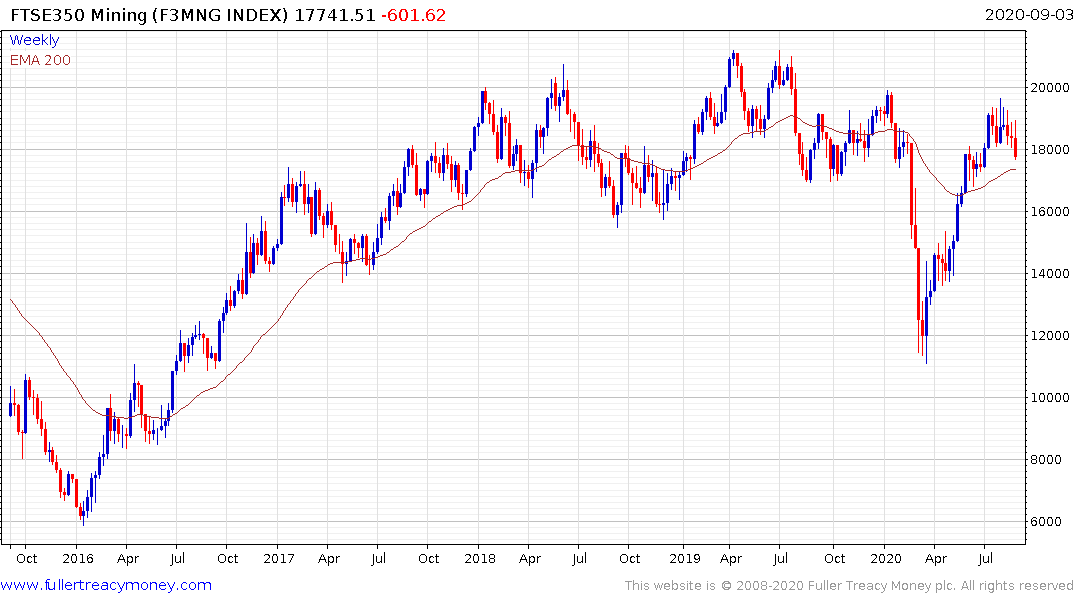 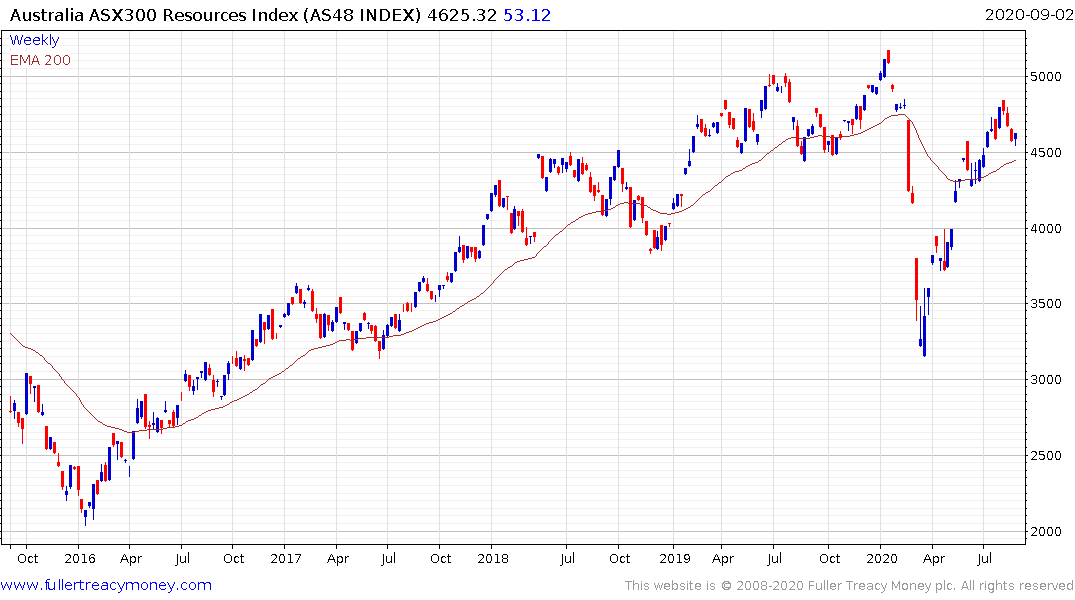 The FTSE-350 Mining Index and the S&P/ASX 300 Resources Index have similar patterns.

These charts suggest we are at a critical juncture. They could have just posted lower highs or this is just a consolidation in a broader recovery scenario. There is a good chance the latter option is the most likely but price action will need to confirm it. 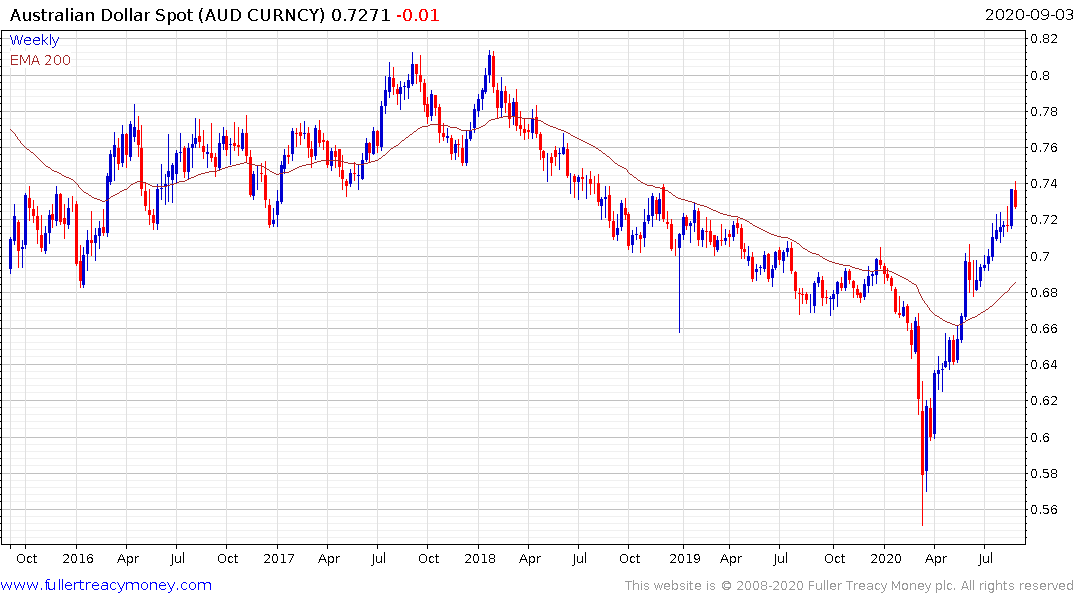 The Australian Dollar’s rebound has paused over the last couple of days but the sequence of higher reaction lows remains intact and it has plenty of room in which to consolidate.