Already on Friday, Federal Reserve Chairman Jerome Powell opened the door to cutting interest rates to contain what he called the “evolving risks” to economic growth from the virus. The Paris-based OECD now expects the weakest global growth this year since the 2009 recession, and said a “long lasting” epidemic would risk a worldwide recession.

The prospect of central banks’ action temporarily halted the worst rout in stocks since that crisis. But the selloff resumed on Monday, with U.S. futures falling and Treasuries rallying.

Money markets now see the Fed lowering its main rate by 50 basis points this month, and give a 70% chance the European Central Bank will pare its by 10 basis points.

Economists at Goldman Sachs Group Inc. predicted the Fed will ultimately slash by 100 basis points in the first half of the year. The BOE will cut by 50 basis points and the ECB by 10 basis points, it said.

There is even speculation that the Fed will move before its policy makers gather on March 17-18, and some economists see the potential for international policy makers to coordinate cuts for the first time since 2008. Investors increasingly bet the central banks of Australia, Canada and Malaysia will ease at meetings already scheduled for this week.

“Global central bankers are intensely focused on the downside risks,” Goldman Sachs economists led by Jan Hatzius said in a report on Sunday. “We suspect that they view the impact of a coordinated move on confidence as greater than the sum of the impacts of each individual move.”

Government bonds are very overbought in the short-term, with US-10-year Treasuries testing the 1% level. That’s been possible because investors have rapidly priced in four quarter point cuts this year with the potential for the first two to be announced within the next two weeks. The potential for synchronised action from a number of central banks is rising, with the aim of lending assistance but also boosting confidence.

The helicopter money initiatives announced in Hong Kong for both individuals and business and the extreme measures delay or stretch loan terms in China are exactly the kind of measures we can expect if/when the virus hits economic activity in the OECD. Italy has already received unofficial support for a fiscal stimulus in typical European “don’t ask, don’t tell” form. 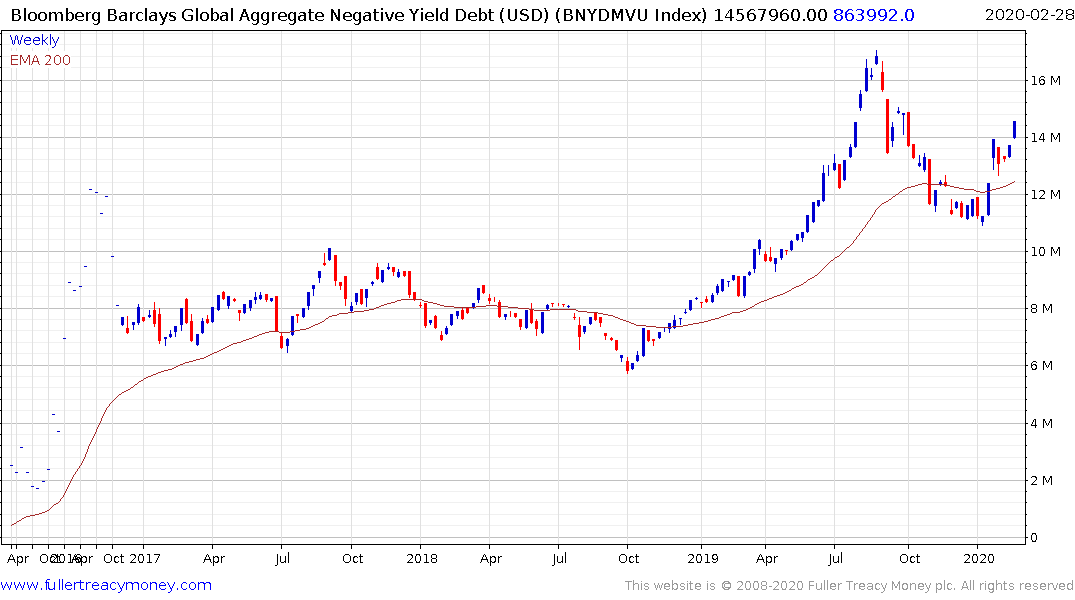 The number of bonds with a negative yield continues to rise but with such a large overbought condition there is clear near-term scope for at least some consolidation.

The scenario I believe is most like but it getting little discussion is the monetary and fiscal response to the virus pandemic will be on par or in some cases even exceed what we saw following the credit crisis but the problem is not as a large. 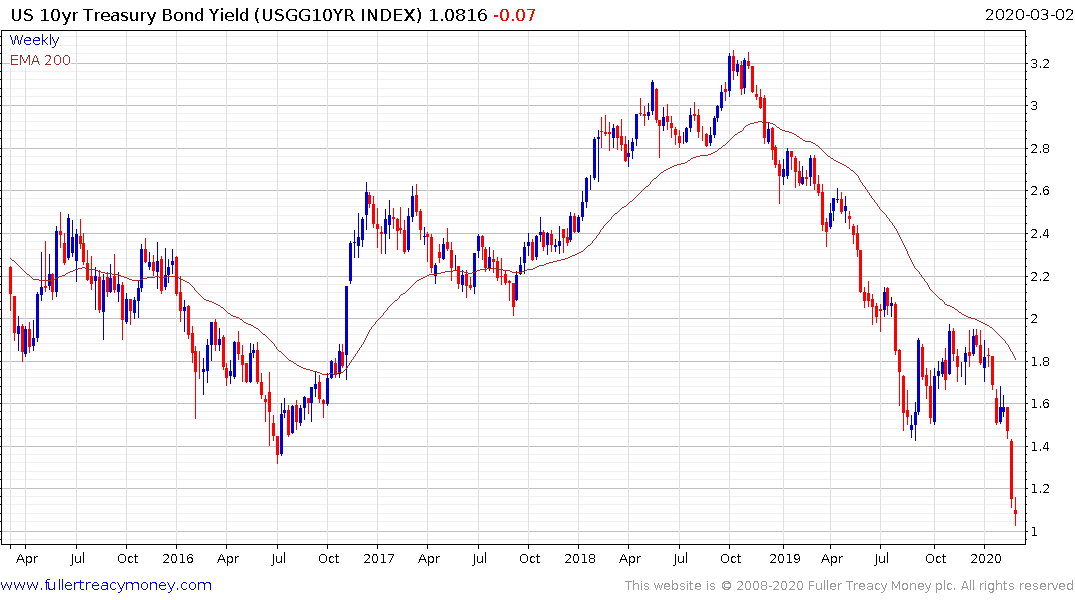 The lower bond yields go, across the global, the more intense the hunt for yield will become. That’s potentially positive for bonds, equities and gold, while the purchasing power of currency will come under pressure. The quantitative signals from falling volatility and wide yield differentials between asset classes holds out the potential we get more than a dead cat bounce. The bull case will not be proved however unless we see a higher reaction low. The collapse in the VIX is supportive of the case for at least a near-term low. 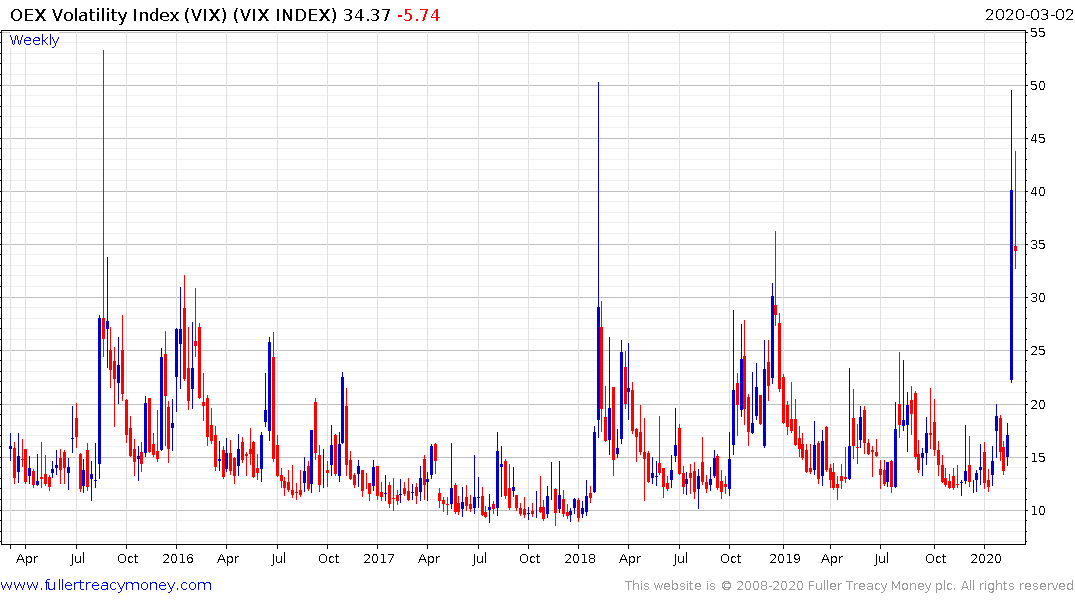 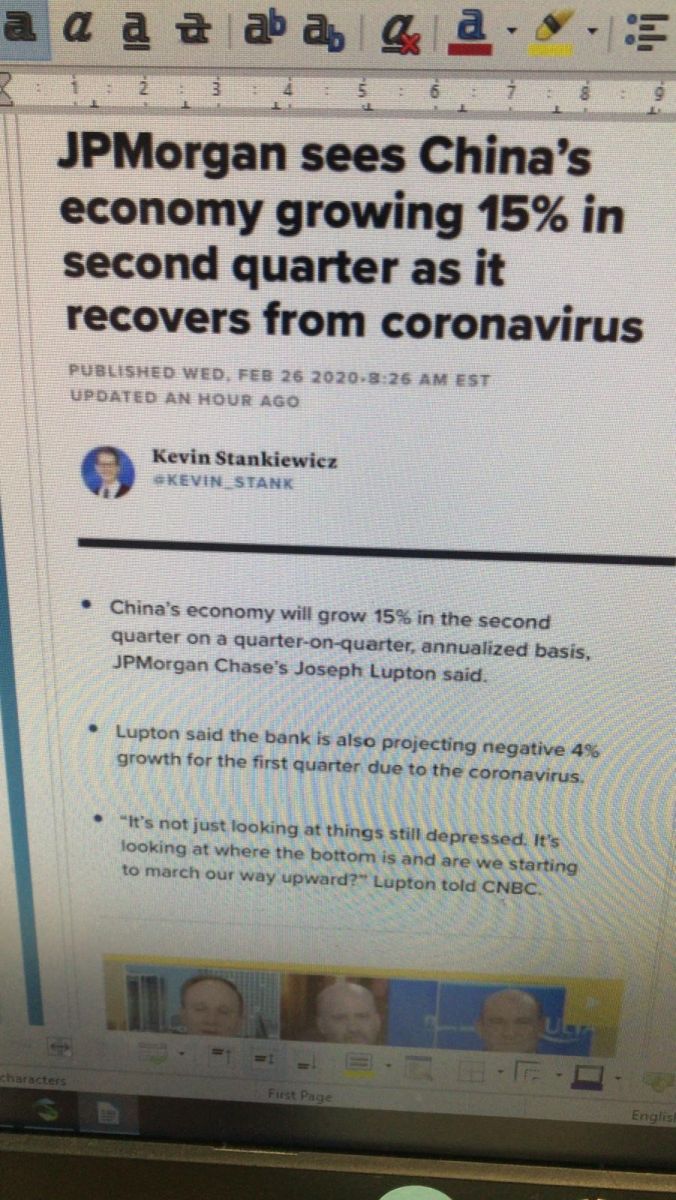 Thanks to a subscriber for this screen shot of a forecast by JPMorgan. They at least seem open to the potential for a rebound similar to early 2019 once the trajectory of bad news peaks.